What we have here is a movie about a Good Ol' Girl, made with the Good Ol' Boy formula. The Good Ol' Person gets in trouble with the law, hitches up with another drifter of the opposite sex, and hits the road for California. After a series of adventures involving weird people and tight scrapes, the two persons learn to trust each other and have more confidence in themselves. The movie ends on a note of moral triumph: In this case, for example, the heroes find the courage to keep on heading for California.

If I'm somewhat muted in my enthusiasm for “Back Roads,” it's because the movie is so relentlessly willing to follow the Road Movie formula. One of the most predictable things about movies such as this is that the filmmakers remain under the delusion that this time, they can find an original approach by populating their formula screenplay with bizarre, eccentric, colorful characters. This approach might work, if they didn't always discover the same colorful characters that a dozen other movies have already discovered. In “Back Roads,” for example, we are expected to be newly astonished by a tough-talking Latino madam, a hard-drinking fight promoter, a bullet-headed evil bruiser, and a homesick sailor. The movie's two leads also are less than amazingly original: Sally Field plays a hooker with a heart of gold, and Tommy Lee Jones is a corrupt ex-prize-fighter with one good fight left in him.

How could they take this material and make it really original? Maybe by refusing to be seduced by the Screenwriter's stock Hollywood "originality" and probing more deeply into the real human lives of the characters. The people in “Back Roads” are so heavily laden with schtick that they never have a chance to develop personalities. Take, for example, the hooker. Field plays the part with enormous appeal and gives a performance that can not be faulted. But the character she's been given to play is a complete fiction. We are expected to believe the usual chiches about how she got to be a hooker: She was taken advantage of by a sailor; she had to give her little boy up for adoption; she weeps every time she sees the little tyke walking into school; she has to prostitute herself in order to eat. She meets another street person (Jones); he sleeps with her and doesn't pay her; they team up together and hitch to the coast.

This is all out of the Damon Runyon school of romantic realism. Think how much more interesting this movie would have been if the screenplay had played tough and uncompromising with the characters. Let's face it: The Field character is a low-life street hooker who's over the hill. In real life, she would undoubtedly be a drug addict or alcoholic. She'd hustle because she couldn't get her act together for two consecutive hours of straight work. She would not trust anybody and possibly would be so emotionally and physically crippled by her habit that a trip to California would kill her.

Instead, the movie's lovebirds hitchhike for days on end. They sleep in the open, they get soaked in ditches, they rob cops and customers, and all the time we're expected to believe that it is an act of growth and courage for them to keep heading west. Actually, it's just another self-deceiving escape, and if the movie had been willing to deal honestly with the plight of its characters, it wouldn't need to be clutterted up with eccentrics and hearts of gold. 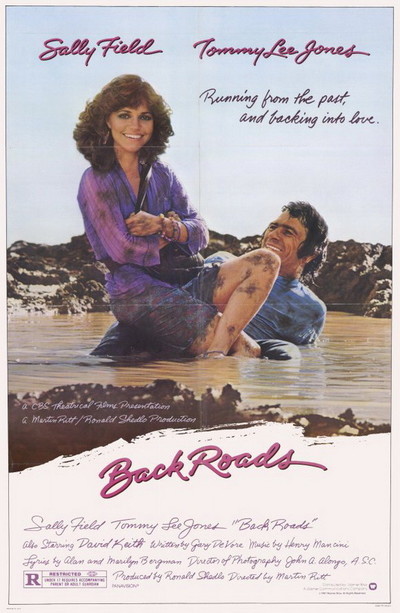