Here's another story of a boy and his dog—except that the dog is a robotic killing machine, developed by an amoral arms manufacturer for the United States military. What could possibly go wrong?

The answer, expectedly, is a lot, and that doesn't have anything to do with the details of the plot of this strange movie. "A-X-L" wants its eponymous dog to be both cute and threatening, depending on whatever mode the screenplay by director Oliver Daly is going for at any particular moment. Daly goes through a few approaches to this story, taking it from a generic tale of a teenage dirt bike racer who feels stuck in his life and bonds with the robot, to a plot about hiding the dog from various locals and the dastardly arms mogul's mercenaries, and, at one point, to an all-out horror story, in which the robot tries to viciously murder a jerk teenager who, earlier, had attempted to kill it for a laugh and some internet views.

We're introduced to AXL (pronounced, "Axle") in a helpful, introductory computer simulation/marketing slideshow. The acronym stands for "attack," "exploration," and "logistics," meaning that it can display its skills with radar or a massive machine gun, depending on the situation. The war machine was created by Andric Craine (Dominic Rains) in the spirit of dogs serving as a companions/helpers to human warriors throughout history. This robot can pair with a single owner and form a bond that's as strong as any natural canine.

It escapes, naturally, and is eventually found by Miles (Alex Neustaedter), the aforementioned bike racer who doesn't see any way out of his current life. He and his father Chuck (Thomas Jane) manage his racing career and work in an auto shop. His dad wants him to think realistically about his future, but Miles doesn't think he's smart enough to go to college. That about ends any level of character development here.

After being left in the desert by Sam (Alex MacNicoll), a well-funded competitor who's jealous of Miles' talent, Miles discovers AXL hiding in a freight crate. Once the awkward misunderstanding of the robot trying to kill him for invading its territory is resolved, Miles fixes up the artificially intelligent dog (which seems to be damaged and incapacitated quite a lot for an advanced weapon of war). The two become buddies of sorts, and the robot helps quite a bit in Miles' attempts to gain the affections of Sara (Becky G), the daughter of Sam's family housekeeper.

The dog itself is portrayed by a disjointed combination of sleek visual effects (for the moments when it goes into action) and ungainly puppetry (whenever it's shot in close-up). The puppet seems bulkier and far more rickety in its movements than its digital counterpart, which smoothly runs and leaps and flies through the air with jet bursts. In other words, it never feels like a real thing, because it's always obvious that the dog is either a special effect or a puppet—and also obvious when Daly switches between the two.

As for the story, well, there isn't much of one. Miles and Sara try to figure out how to hide the robot while they decide what to do with it. Craine watches AXL bond with Miles through the robot's eyes, believing that he's accidentally stumbled upon a human test subject ("Let's see how this plays out," he says, while watching AXL pin Miles' bully to the ground and threaten the guy with the sharp, whirring gears in its mouth). Miles and Sara keep having to repair the dog, as Craine's corporate goons get closer to them. Chuck offers some sane advice to his son about playing with a machine that was designed to kill, while Craine's right-hand man (played by Lou Taylor Pucci) snivels about his boss' unethical behavior.

Daly doesn't possess any real concerns about the ethical quandary of this dog's existence, of course. The robot is as much a tool for the filmmaker as it is for the villain. The dog is supposed to be loveable, with its red eyes switching to a neon blue whenever it finds a new friend or plays fetch, or a ruthless killing machine, such as when it hunts Sam like some stalking killer in a horror movie (even popping into frame with rough barks and sharp, metal teeth to scare the kids in the audience into the arms of a parent).

What's missing is any genuine personality from the robot (or the human characters, for that matter). After a violent standoff/chase, "A-X-L" promises a sequel (good luck with that) and an improved dog. Hopefully, its temperament gets an update. 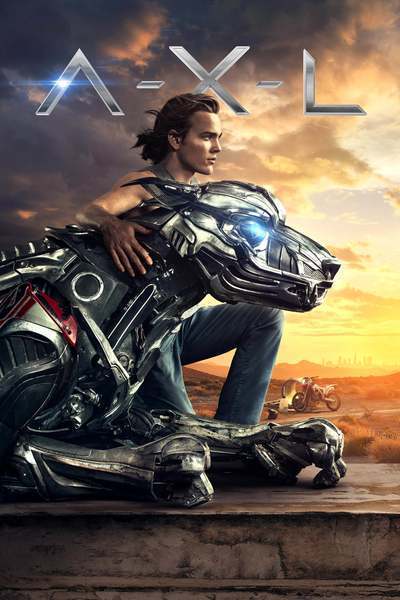