Since its entry into mainstream cinema in the 1970s, the “rape-revenge” subgenre has never really disappeared from the scene. On the backs of the growing discourse around media representation, the #MeToo movement, and the push for growth in female representation both in front of and behind the camera, it's hardly surprising that recent years have seen rape-revenge films return, including such lauded titles as “Elle” and “Promising Young Woman.”

“Asking for It,” the pitifully underwhelming feature debut of writer/director Eamon O’Rourke, is like a guest that shows up to the party late, empty-handed, and without the common courtesy to at least be a good conversationalist.

The film follows small-town waitress Joey (Kiersey Clemons) as she befriends Regina (Alexandra Shipp), a regular at the diner where she works. After crossing paths with an old school acquaintance leads to date rape, Regina introduces Joey to her friends, who just so happen to be an all-female gang of vigilantes known as the Cherry Bombers—members include the hot-headed Beatrice (Vanessa Hudgens), and their learned advisors, Sal (Radha Mitchell) and Fala (Casey Camp-Horinek). The women are united through traumatic experiences at the hands of the patriarchy and have turned their personal quests for vengeance into a broader mission to make misogynists suffer. They have been planning their biggest mission yet—to target Men’s First Movement (MFM) leader Mark Vanderhill (Ezra Miller), whose toxic but popular rhetoric is equal parts men’s rights nonsense and incel vitriol.

Any sense of the band coming together—cinematic bread and butter for a film like this—is weirdly skimmed over here, one of the many factors contributing to how most of the characters are poorly defined. Much of the cast, and Clemons especially, are clearly talented. But they cannot create something out of nothing, which is precisely what the film gives its ensemble.

“Asking for It” is so heavy-handed and clumsy it forgets to have much of anything that can be called dialogue—characters do not speak with each other so much as talk at each other, making long-winded statements only prompted by the whims of the narrative. And who among the Cherry Bombers receives a backstory (always tragic, of course) seems like a rather random drawing amongst the group, with about half of the crew being little more than glorified extras as far as character development is concerned.

Illogically enough, Regina is among the utterly indistinct. Although the film indicates Joey’s bond is supposed to be strongest with Regina, it does next to nothing to earn your investment in the relationship; Regina has no defining characteristics besides being the one to recruit Joey. It’s mostly Beatrice who dominates the Cherry Bombers scenes. Her characterization feels primarily defined by Vanessa Hudgens wanting to play against type by being as confrontational and pierced as possible. At one point she puts on a bright pink strap-on—it’s part of a nefarious scheme to be inflammatory regardless of the fact that it does not make a lick of sense.

It feels like O'Rourke did a comprehensive viewing of the rape-revenge canon in preparation—there’s a moment in a parking lot near an old movie theater with “Thelma and Louise” among the titles listed on the marquee, for instance—but never did the deeper story work to understand the mechanics that make those stories actually tick. Even the very basics—having an antagonist and utilizing a villain effectively—are utterly blundered. Vanderhill is the big bad until he suddenly isn’t, superseded by a slimy human trafficker Sherriff Morrill (David Patrick Kelly), and then a third antagonist more personal to Joey comes to the fore again. While plenty of films have effectively juggled multiple antagonists or managed to effectively nest them together, “Asking For It” ends up horribly confused.

“Asking for It” is like a cheap puppet show—everyone here feels like a flat paper cut-out, jerked helter-skelter by painfully obvious strings, mouthpieces for the man standing just behind the curtain, who speaks in meaninglessly overused truisms about agency and controlling one’s own story. It's so baffling that Eamon O’Rourke—a white man—would apply all the time and effort required of a debut feature to a story that culminates with its Black female protagonist giving a painfully heavy-handed speech about reclaiming her own narrative when this film is so very much not his own. That is not to say that white men should not helm stories centering Black women or are incapable of doing so. But O'Rourke does not seem to be especially comfortable or familiar with the narrative he is telling. It all defies reasonable explanation to a remarkably impressive degree. 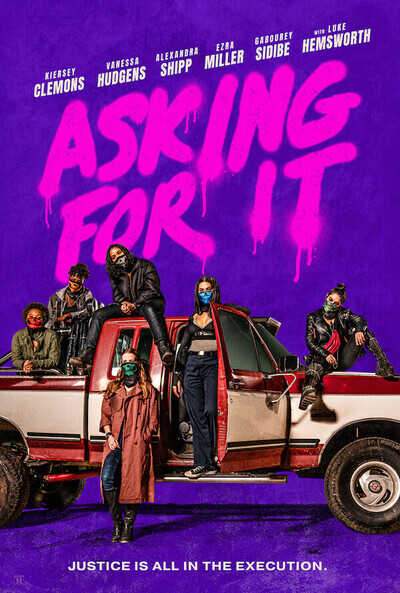 Rated R for disturbing and violent content, sexual material, nudity, and language throughout.