It’s fascinating that Zack Snyder’s “Army of the Dead” has become an entire franchise overnight. Is this the new way? It’s not impossible for a film to have a sequel green-lit before the first movie is released—sometimes they’re even produced simultaneously if they’re telling one story, like with Peter Jackson’s films—but the fact that Snyder’s return to the world of the undead came into existence with a prequel and TV series already in production is almost startling. What if people hated “Army”? I guess Netflix doesn’t concern itself too much with the question of quality. And so a prequel movie, TV series, and traditional sequel are all in various stages of coming to life in the streaming pipeline. Snyder will likely direct “Planet of the Dead” and the animated series “Army of the Dead: Lost Vegas” premieres next year.

Until then, fans can check out the prequel, “Army of Thieves,” dropping on Netflix today with its flurry of kinetic editing that’s designed to hide some serious pacing problems and bland characters. It’s a heist-action movie that takes forever to get going and its admittedly fun second half can’t make up for the dull set-up. Snyder stays on as a producer but hands directorial duties off to Matthias Schweighöfer, who played safecracker Dieter Ludwig in the zombie film. The wisecracking criminal was one of the highlights of Snyder’s movie, a nice balance to the more traditional alpha males played by Dave Bautista and Omari Hardwick. Having said that, a character that works as a complement to the main action of a film like “Army” doesn’t necessarily work the same way as the centerpiece. The biggest problem with "Army of Thieves" may be that it doesn’t feel like anyone except those counting Netflix’s international subscribers was asking for 130 minutes of Dieter.

“Army of Thieves” takes place six years before the action of “Army of the Dead” as the world is just starting to come to terms with the reality of a zombie outbreak—it’s mostly seen on news reports in the background and in a few of Dieter’s prophetic dreams. Dieter (known in this story as Sebastian for reasons explained later) is in the early days of safecracking expertise, and he puts together a barely-seen YouTube video about four legendary safes that were designed based on Wagner’s Ring Cycle. Remember how in “Army of the Dead” that Sebastian was excited at the prospect of cracking the famous Götterdämmerung safe in Vegas? That’s because it was really the final safe of a quartet of masterfully designed machines. One of Schweighöfer’s strengths as a director/actor is in how he captures Sebastian’s admiration for these safes. They’re not just obstacles for a criminal to conquer—he treats them like a mountain climber looking at Everest. The challenge is as exciting as the result.

After his video posts, Sebastian receives a mysterious invitation to a safe-cracking competition that’s kind of like Fight Club with less blood. He wins it, of course, proving himself to an observer named Gwendoline (Nathalie Emmanuel), who recruits him into a group of criminals that is planning to crack the other three safes before they’re retired. Once again, this is kind of a story of opportunity. The upcoming apocalypse will make this job much harder, so it’s now or never for Gwendoline, Korina (Ruby O. Fee), Rolph (Guz Khan), and Brad Cage (Stuart Martin).

Clearly designed for the international market, “Army of Thieves” is an odd duck, a prequel to a zombie action movie that doesn’t have many zombies and hardly any action. The first hour of “Thieves” is interminable—it’s an hour before there’s anything resembling real action—and there’s just no reason at all for this movie to run over 130 minutes other than length seems to be a part of the Snyder mode. It’s a shame because “Army of Thieves” does spring to life once the planning stops and the heists really get going. As a director, Schweighöfer clearly learned a lot from Snyder’s skill with slo-mo, hyper-stylized action and yet he doesn’t feel completely like he’s merely copying his collaborator’s eye. The heist scenes are as carefully calibrated as they need to be in a movie like this to work—they make this prequel that no one really asked for at least an entertaining diversion.

It’s the set-up and the repetition that will make that diversion into more of a footnote than an actual expansion. While Schweighöfer is more charming than I expected, his kind of wide-eyed romantic criminal works better in small doses and this movie is large doses of Sebastian, to such a degree that the rest of the crew is ignored. Why not just center Sebastian but surround him with other scene-stealers? Emmanuel is boring, never developing the right chemistry with Schweighöfer, and she really makes out better than anyone else (although Fee is fun but under-utilized). Heist movies need full crews like the “Ocean’s” flicks or even “Now You See Me.” This one fails in that department. Let’s hope the upcoming projects in this fully-formed franchise learn a lesson from this gang of thieves and steal some ideas from better movies. 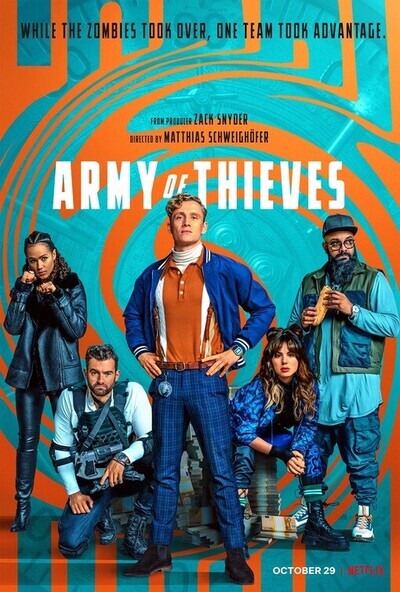