On the heels of HBO Max releasing Zack Snyder's director's cut of "Justice League," the divisive filmmaker hops from one major streamer to another with next week’s Netflix premiere of “Army of the Dead,” released in a limited theatrical release tomorrow, May 12th. One can’t title a zombie movie anything “…of the Dead” and not expect to draw comparisons to the great George A. Romero, but Snyder’s pedigree includes helming the only good remake of one of the master’s undead flicks in his 2004 version of “Dawn of the Dead.” So does the new one match up to either that taut horror remake or the works of Romero himself? Yes and no. There are elements of this aggressive action extravaganza that are tightly conceived and executed—mostly in the “zombie headshots” department. There are also themes that feel muddled and characters that are incredibly thin—yes, even for a movie like this one for which character is rarely a strong suit. Still, the film delivers on what it promises in its title, which may be all that’s needed for Snyder fans and those looking for a new action movie in an era when it still feels like all the blockbusters have been delayed.

“Army of the Dead” opens with a clever scene involving a military transport colliding with a pair of newlyweds “celebrating” their marriage while driving down a Nevada highway. A bit of dialogue reveals that the convoy has recently come from Area 51 and that their undefined payload is so dangerous that their military-grade weapons won’t make much of an impact. When the large container holding that deadly passenger is damaged, it opens, and the soldiers who survived the accident are pretty quickly turned into the undead before climbing a hill to set their sights on the city of sin, Las Vegas.

Over a cover version (of course) of “Viva Las Vegas,” Snyder unfolds a clever montage of the carnage that pretty quickly happened next. Topless zombie showgirls devour a man in a bathtub; zombies turn casino floors into their playgrounds; the military comes in to get out as many survivors as possible before the entire city is walled off. The credits also introduce us to our major players, including Ward (Dave Bautista), Cruz (Ana de la Reguera), and Vanderohe (Omari Hardwick)—three soldiers with dead aim and a whole lot of luck. Although, after escaping the city, they’ve returned to blue-collar jobs while the government debates what to do now that a zombie king is running a casino called Olympus.

That’s why Ward listens when a wealthy man named Tanaka (Hiroyuki Sanada) comes to him with a proposal. There’s $200 million in a vault under Las Vegas. Get a team together, get the cash, and get out before the government nukes the entire city and they can keep $50 million of it. Ward reunites with Cruz and Vanderohe, and the trio then puts together their own ‘Ward’s 11,’ including an expert safecracker (Matthias Schweighöfer), a viral personality (Raúl Castillo), a helicopter pilot (Tig Notaro, seamlessly replacing Chris D’Elia, who shot the film and then was replaced with reshoots), one of Tanaka’s men (Garret Dillahunt), and eventually even his own daughter Kate (Ella Purnell). Other faces will pop up, including a scene-stealing coyote (Nora Arnezeder) and an abusive officer (Theo Rossi). Most of them will end up zombie food. (That’s only a spoiler if you’ve never seen a zombie movie. Sorry.)

Despite its remarkable length, “Army of the Dead” is a pretty deliberate, lean movie that effectively blends the heist genre with the zombie one. Snyder’s co-written script has just enough new in both departments, although I wish there was a bit more to the heist itself than the direct line from A to Z(ombie) and trying to get back to A again. It sometimes feels like the plot of “Army of the Dead” is merely a skeleton on which to hang the action scenes instead of something inherently clever on its own. I kept waiting for a twist or a surprise that never really came.

It also would have helped for the lack of inventiveness in the story to be offset by more interesting characters but these ones are incredibly shallow even for the “zombie action” genre. One could completely define almost every character in the film with no more than three words max. For example, Ward is a father, chef, and soldier, and that’s all that anyone knows about him. Bautista, a charismatic and underrated actor, struggles to make him feel three-dimensional, but he makes out better than De la Reguera or Hardwick, both of whom have almost no character at all. It’s one of those films where the supporting players steal focus from the straight-faced leads simply because they give the film some energy, particularly Dillahunt, Schweighöfer, and Arnezeder, who are all great. But why not punch it up a bit and give everyone a little personality? Some of the zombies here have more character depth than the humans, for Romero's sake.

There’s also a sense that Snyder is playing with political and topical themes without having much to say about any of them. Walls that separate people to the point that the team needs a coyote to get back into an American city? That’s inherently topical given the hot buttons it presses, and it’s impossible not to look at someone being temperature-checked and not think about the current state of the world (even if there's no way Snyder could have predicted that reality). The problem is that they don’t add up to much. They’re flavor instead of actual ideas, and that’s downright anti-Romero given how much the master was willing to go right at themes like dead-eyed consumerism and the military industrial complex in films like “Dawn of the Dead” and “Day of the Dead.” It’s not that “Army of the Dead” necessarily needed those elements to work, but there’s something frustrating about teasing them into this story only for them not to really go anywhere.

So what does work about “Army of the Dead”? It’s fun and unpretentious, driven more by its action set pieces than anything else. It’s clearly as inspired by modern “fast zombie” films like “World War Z” or “28 Days Later” as it is the works of the master, and there are moments when its grand insanity just clicks thanks to the set-piece ambition of its filmmaker and the willingness of its cast to go anywhere he leads them. An unforgettable zombie tiger, a strange sort of undead king/queen dynamic that shapes the action, a great sequence involving using brain-eaters to spring booby traps—these are the kind of fun, clever beats that keep “Army of the Dead” alive. There are just enough of them to hold it together, even if it’s a spin or two away from winning the jackpot.

In theaters tomorrow and on Netflix next week. 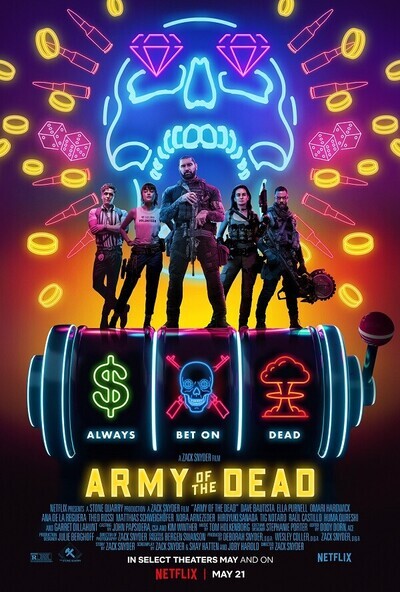 Nora Arnezeder as Lilly / The Coyote