For a high school student surrounded by the chaos of the teen world, Kelsa (a captivating Eva Reign)—the central heroine of Billy Porter’s “Anything’s Possible”—seems to have the important stuff figured out. She knows that she loves animals, growing her kinship on their habitats and survival patterns every day. She knows that she wants to study zoology and become a nature cinematographer one day. And even though her name literally means “brave,” she knows that she doesn’t like it when people call her that, only because of her gender identity: a confident trans girl certain of who she is.

But like any teen, Kelsa still has a lot of things to learn and experience, mistakes that she needs to make on her own and witness some made by others at her expense. If this template rings a little too familiar, like a John Hughes outing adapted for this side of the 21st Century inclusive of diverse experiences, that’s because it is designed to do so through a gentle script insightfully written by Ximena García Lecuona. In fact, “Pose” star (and powerhouse entertainer one Oscar away from the coveted EGOT) Porter’s delightful debut is perhaps most groundbreaking exactly because of this familiarity, one that grants a Black, high-school-aged trans girl—a character we rarely see in cinema, if at all—a recognizable youthful tale not defined by bigoted adversity. At least not solely. In other words, what “Anything’s Possible” says is, “Here is a mix of teen romances and comedies you know, but featuring characters you might not have seen before.”

Still, not everything is business as usual in “Anything’s Possible,” despite a healthy dose of customary teenage romantic troubles and friendship drama. For starters, Kelsa isn’t entirely sure what to make of the notion of romance just yet. She is afraid, as she confesses on her charming and only modestly viewed vlog, that someone might like her only to seem woke and supportive. And the opposite of that—which is, crushing prejudice and rejection—is also a frightening prospect. She often says she wants to be loved and accepted for being who she is. That’s partly why she resists to even mention her gender identity on her college application essay (“I don’t want to exploit it,” she explains), despite her perennially supportive single mom’s (Renée Elise Goldsberry) insistence. And her helpful parent has a decent point: isn’t being trans, isn’t the assured way in which she steered her transition, a part of who Kelsa is?

Luckily, she seems to be surrounded by some best friends who have no trouble accepting all of Kelsa, a gifted student and a giving friend. There is Chris (Kelly Lamor Wilson), sporting a blindingly fabulous purple hair color and creative make-up; as well as Em (Courtnee Carter), whose hair accessories and eclectic, eye-popping wardrobe makes Dionne of “Clueless” seem like someone with a safe fashion sense. (The stunning costumes are by Analucia McGorty, also of “Pose.”) If only Em and Kelsa didn’t have a crush on the same guy, the talented artist/Muslim student Khal (Abubakr Ali), who reciprocates Kelsa’s feelings. If their long conversations, playfulness with one another, and palpable chemistry are any indication, there could truly be a fruitful relationship on the horizon for these two. But what would Khal’s supportive yet traditional family think? What would their school friends say?

In due course, the duo gets together as a romantic couple and all hell breaks loose. Well, not exactly, but Em does react to the news poorly, worse than Kelsa might have predicted. As far as the school crowd goes? They respond with the kind of performative support Kelsa detests. Perhaps worse than that is a group of narrow-minded (or flat-out homophobic) friends of Khal, who cluelessly wonder whether he is gay. Still, the couple navigates the dilemmas with grace, even when certain boundaries get crossed between friends, lovers and even family members.

Sometimes, there is a certain safeness to the tone of “Anything’s Possible,” a demeanor that’s too eager to please, too game to deliver all the correct messages to the widest group possible; one that put a dent in various teenage-centric movies of late like “Crush,” “Moxie,” and even “Booksmart.” But you can hardly blame Lecuona or Porter for that seeming lack of risk or edge—it’s not like high-school movies about trans youth have become so mainstream that storytellers feel safe to gamble outside of tried-and-true zones. (One should note that with the likes of “Pose” and “Euphoria,” TV is well ahead here.) Perhaps one day, we’ll get there in American cinema. Until then, “Anything’s Possible” is quite possibly the best thing we have to celebrate. 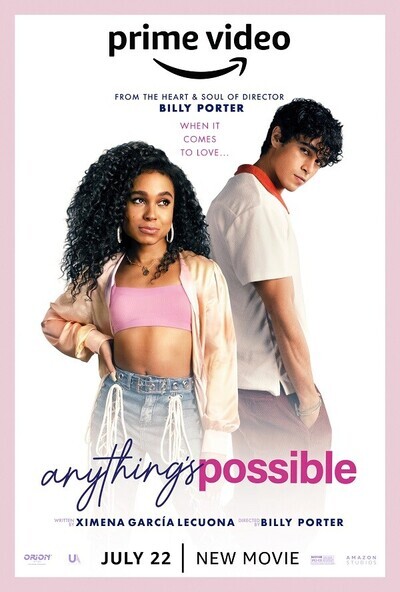