No war is without a substantial cost that deprives individuals or entire nations of certain human qualities. But where exactly does one draw the line, if there is a line to be drawn at all, when determining what a relatively acceptable course of wartime action would look like? While hardly original, this is now and always will be a worthy inquiry for artists to make, especially amid the perpetual moral reckonings of the post-9/11 world. Joe Chappelle’s new political thriller, along with a title that spells out its intentions, is grounded in one such ethical dilemma—of a woman in governmental power, who has remorsefully signed off on a massive tragedy. It’s a gigantic topic, which the writer-director regrettably engages with through the most basic of means. While Chappelle neatly outlines the tragic events caused by his spiritually bruised protagonist, it’s hard to stay engaged with his philosophical query that divides arguments into distinct rights and wrongs early on, and only asks shallow questions.

We meet Elizabeth “Libby” Lamm (Tika Sumpter) when she takes over a teaching post at a Chicago-based college, while in the midst of a worldwide controversy. She is greeted by protests, silent, suggestive looks from onlookers and anxious colleagues hesitant to as much as shake her hand at first. Through methodically parsed flashbacks, “An Acceptable Loss” slowly unravels the scope of her dark secret—a former high-ranking government official in charge of national security advisory, Libby had approved a devastating military action in the Middle East that took the lives of nearly hundred and fifty thousand civilians, including children. She sleeps with a gun, doesn’t use a phone or email address (a most implausible detail) and is often confronted by random strangers, who helpfully remind her the consequences of her actions in various heavy-handed and overacted scenes. Meanwhile Martin (Ben Tavassoli), a political science graduate student, pursues Libby for unknown reasons, as Libby plans to expose the dirty truths of the coldblooded politician Rachel Burke (Jamie Lee Curtis), who masterminded the ruinous raid that was supposed bring an end to the war on terrorism.

Curtis and Sumpter (who is remarkable in the heartwarming “Southside With You” as Michelle Robinson on her first date with the young Barack Obama) are unsurprisingly the film’s most striking assets. Sadly, they seem overpowered by an overtly stern-faced story that feels more dutiful and obvious than thrilling and inquisitive. Chappelle’s script falls short on intricately building Libby’s inner trauma to make it relatable. As for Rachel, there is little that develops her character’s political villainy. Involved parties constantly fire off ideas on Americanism, the totality of the war on terror, the cost of safety, and so on, and yet, none of the prescriptively preachy text sticks a landing.

In sketching out his characters to examine human conscience and guilt through irreversible political decisions, Chappelle was reportedly inspired by two acclaimed political documentaries by the great Errol Morris: “The Fog of War" and “The Unknown Known.” His Libby and Rachel were apparently written with Robert McNamara and Donald Rumsfeld in mind, as these two key figures internally dealt with the aftermath of their wartime actions quite differently from each other. In that, Chappelle deserves acknowledgment for imagining females in these key roles. Except, he misses a big opportunity to investigate their impulses in a pre-dominantly male and in Libby’s case, white world. Throughout its numerous shouting duels among fictionalized political figures and dull cat-and-mouse scenes between characters driven by vague personal motives, there is startlingly little depth to be found in “An Acceptable Loss,” which feels gripping only if you compare it to a random couple of hours of C-SPAN. 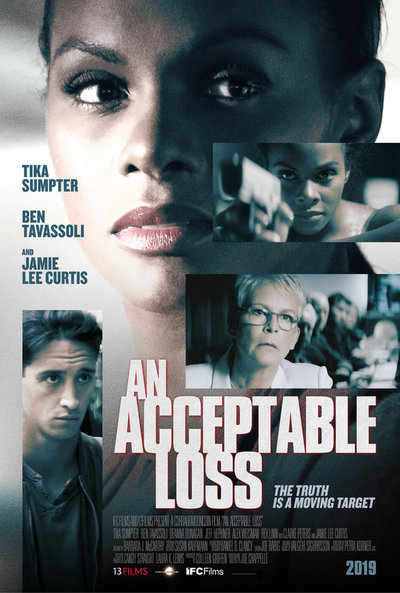