As Michelle Robinson (Tika Sumpter) gets dressed in her home on the South Side of Chicago, her mother (Vanessa Bell Calloway) playfully teases her about the amount of effort Michelle is putting into her appearance. “I thought this wasn’t a date,” she chides. Michelle insists it isn’t. “You know I like to look nice when I go out,” she says. When her father joins his wife in ribbing their daughter, Michelle digs in her heels about this being a “non-date”. But it’s clear the lady doth protest too much. In her mind, there’s no way she’s falling for the smooth-talking co-worker who invited her to a community event. She’s seen this type of brother before, and she thinks she’s immune to his brand of charm.

Soon, the brother in question, Barack Obama (Parker Sawyers), picks up Miss Robinson. Our first glimpse of him, backed by Janet Jackson’s deliriously catchy 1989 hit “Miss You Much," is a master class of not allowing one’s meager means to interfere with one’s confidence level. Barack smokes with the preternaturally efficient coolness of Bette Davis, yet drives a car built for Fred Flintstone. The large hole in the passenger side floor of his raggedy vehicle will not diminish his swagger nor derail his plan. Using the community event as a jumping-off point, he intends to gently push this non-date into the date category.

So begins the romantic comedy "Southside with You," a mostly-true account of the first date between our current President and the First Lady. Like “Before Sunrise,” a film which invites comparison, “Southside with You” is a two-hander that's top-heavy with dialogue, walking and a knowing sense of location. Unlike that film, however, we already know the ending before the lights go down in the theater. So, writer/director Richard Tanne replaces the suspenseful pull of “will they or won’t they?” with an equally compelling and understated character study that humanizes his larger-than-life public figures. Tanne reminds us that, before ascending to the most powerful office in the world, Barack and Michelle were just two regular people who started out somewhere much smaller.

This down-to-earth approach works surprisingly well because “Southside with You” never loses sight of the primary tenet of a great romantic comedy: All you need is two people whom the audience wants to see get together—then you put them together. So many entries in this genre fail miserably because the filmmakers feel compelled to overcomplicate matters with useless subplots and extraneous characters; they mistake cacophony for complexity. “Southside with You” builds its emotional richness by coasting on the charisma of its two leads as they carefully navigate each other’s personality quirks and life stories. We may be ahead of them in terms of knowing the outcome, but we’re simultaneously learning the details.

“Southside with You” is at once a love song to the city of Chicago and its denizens, an unmistakably Black romance and a gentle, universal comedy. It is unapologetic about all three of these elements, and interweaves them in such a subtle fashion that they become more pronounced only upon later reflection. The Chicago affection manifests itself not only in a scene where, in front of a small group of community activists welcoming back their favorite son, Barack demonstrates a rough version of the speechmaking ability that will later become his trademark, but also when Barack takes Michelle to an art gallery. He points out that the Ernie Barnes paintings they’re viewing were used on the Chicago-set sitcom “Good Times.” Then the duo recite Chicago native Gwendolyn Brooks’ poem about the pool players at the Golden Shovel, "We Real Cool." Even the beloved founder of this site, Roger Ebert, gets a shout-out for championing “Do the Right Thing," the movie Barack and Michelle attend in the closing hours of their date.

Though its depiction of romance is recognizable to anyone who has ever gone on a successful first date, “Southside with You” also takes time to address the concerns Michelle has with dating her co-worker, especially since she’s his superior and the only Black woman in the office. The optics of this pairing worries her in ways that hint at the corporate sexism that existed back in 1989, and continues in some fashion today. Her concern is that her superiors might think she threw herself at the only other Black employee which, based on my own personal workplace experience, I found completely relatable. This plotline has traction, culminating in a fictional though very effective climactic scene between Barack, Michelle and their boss. It’s a bit overdramatic, but the payoff is a lovely ice cream-based reconciliation that may do for Baskin-Robbins what Beyoncé’s “Formation” did for Red Lobster.

Heady topics aside, “Southside with You” is often hilarious and never loses its old-fashioned sweetness. Sumpter’s take on Michelle is a tad more on-point than Sawyers’ Barack, but he compensates by exuding the same bemused self-assurance as his real-life counterpart. The two leads are both excellent, but this is really Michelle’s show. Sumpter relishes throwing those “you think you’re cute” looks that poke sharp, though loving holes in all forms of braggadocio, and Sawyers fills them with surprising vulnerability. The two manage to create a beautiful tribute to enduring love in just under 90 minutes, making “Southside with You” an irresistibly romantic and rousing success. 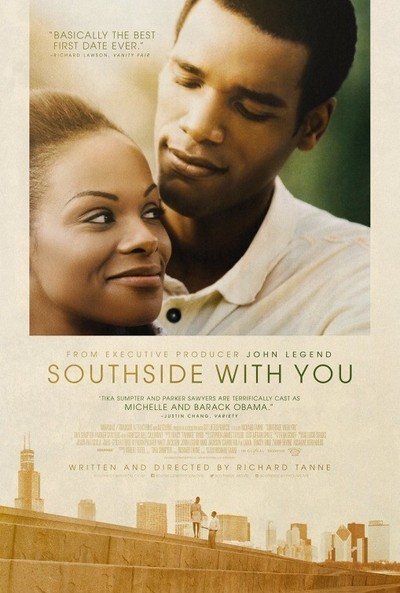