The French-American army-heist action-comedy "American Renegades" is a cross between "Ocean's 11" and "The Expendables." "American Renegades" is also not nearly as fun as that sounds. Don't get me wrong, the “Expendables” and “Ocean’s 11” movies are primarily dumb, but enjoyable baubles that are attractive because, well, it's fun to watch attractive celebrities be confident and stylish while also doing impossible things, like shooting guns in "Assmanistan" ("Expendables 3") or robbing Al Pacino ("Ocean's 13").

Unfortunately, "American Renegades” is bad on two levels: 1) the expected level—it’s somehow as superficial as both the “Expendables” and, to a far lesser extent, the “Ocean’s” films, but also, 2) the unexpected level—it doesn’t even have George Clooney or Sylvester Stallone to make its essential shallow-ness seem attractive. Because movies about super-teams of stock characters—Dynamite Guy! Sexy Leader! Dumb Loverboy!—are only really fun when celebrities (or accomplished character actors, whichever comes first) do something light and silly, like recovering a sunken Bosnian treasure trove of art and gold that was stolen by the Nazis back in WWII). Not so much when it’s B-movie neophytes trying to sell a slick, but hollow scenario for a high-concept genre hybrid. “American Renegades” might look good on paper, but it's pretty tiresome on the screen.

So: Sexy Leader ("Animal Kingdom" star Sullivan Stapleton), an American soldier, is convinced by Dumb Loverboy (Charlie Bewley), his second-in-command, that Loverboy's Bosnian girlfriend, Femme Fatale with a Heart of Gold (Sylvia Hoeks), is on the up-and-up when she tells them where to find an underwater cache of Nazi gold. So Sexy and Dumb assemble their crew of Dynamite Guy (Dimitri Leonidas), Also Dumb But Less Fun Rage Case (Diarmaid Murtagh), and Under-developed but Somehow Also Self-Aware Token Black Guy (Joshua Henry). And then they get up to shenanigans. In Bosnia. While their commanding officer Comical Hard-Ass (J.K. Simmons), the only fun character, mostly sits this one out (priorities, y'know?).

With the exception of Simmons—who doesn't get fed nearly enough scenery—the film's cast is ... actually, Mostly Fine. Even if its individual members also deliver Mostly Undistinguished performances. Problem is: I, the viewer, have to find these guys’ disarming if this sort of thinking-light genre exercise is going to work. Unfortunately, I didn’t care about these actors when their stock characters did anything as a team, not even when they created a diversion by getting into a contrived (and visually uninspired) tussle with a pack of British SAS army men. Because again, the film's cast members are Mostly Not Bad, but also Mostly Not Good. If you’re neither overwhelmingly clever nor consummately cute ... why bother to make this sort of lip-teasingly precious (half-winking, half-old-fashioned) B-movie?

Let me back up a moment. When I say that "American Renegades" is not clever, I mean that this film's visual strengths are often far greater than everything else. Unfortunately, that isn't saying much. Just look at the film's cold opening looting montage. Without almost any dialogue, we see: French paintings getting loaded up by Nazis in ... oh, it's France, there's the Eiffel Tower, but ... oh, the Nazis are leaving, and they've got bars of gold, too ... from an unknown origin ... and oh, whoa, there's a French lady telling her son to flee ... wait, is she French ... she's not speaking French, what language is that ... also, I don't know if she's Jewish, or a collaborator, or a Nazi, or a freedom righter, or ... what exactly am I looking at here?

I had to rewatch this opening sequence three times before I understood what was happening. Which is a bit of a problem when your film opens with an overly-complicated montage that ineffectively serves as a one-stop shop for all your establishing plot needs, including a mysterious dangling conclusion involving a bunch of random freedom fighters, whose leader briefly shows himself and prepares to use one of those cool-looking plungers that you always see Wile E. Coyote using to blow himself up. I had no idea who those freedom fighter guys were either, because there was pretty much no dialogue to establish a meaningful relationship between them and the viewer. The looting montage finally ends with a title card: "American Renegades." Oh, great, now the movie starts?

I can see why someone might take to "American Renegades" because of its confident visuals and snarky humor. But I didn’t, because it takes too much time to figure out why I’m looking at, well, anything. Because once I did figure out what I was looking at, the film's skin-deep style and juvenile humor made me wonder why I worked so hard in the first place! “American Renegades” may be of some interest because it requires viewers to take a little more effort to assemble the film's jokes and plot. But, as Gene Shalit might have said: this movie often tested my patience, so I failed to enjoy it. 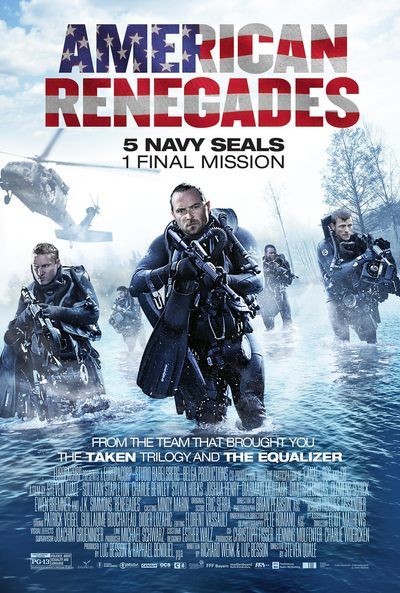