American Murder: The Family Next Door

Shanann Watts lived a very online life. She posted videos of her beautiful family online with such regularity that one can get a sense of who she was as a person through the footage that’s publicly available through social media services. Realizing how much of Watts’ personality was right there online must have been the spark for the filmmakers of Netflix’s “American Murder: The Family Next Door” to devise their true crime documentary in a truly original way. There’s not a single talking-head interview or recreated event in this doc—every single image was either uploaded to the internet, taken by investigators, or text messaged from players involved. The result is a film that feels deeply personal, and not always in a good way. It’s a film that can’t help but feel a little like an invasion of privacy. Yes, Shanann agreed to post her life online, but that doesn’t mean she expected it to be dissected and analyzed after her tragic death, and the question of who gave approval for her text messages to become part of a film pushes the experience into something that feels exploitative at times. I’m sure Shanann’s family approved, but there’s always that question of how much stories like these should belong to the loved ones of the people involved and how much they should be exposed to the world. And I’m not sure this film always justifies its invasion of privacy.

The counter to that would be that “American Murder” reveals how much an online persona can hide an unsettled life. The facts of this case aren’t really in question. It’s not one of those mysteries that people dissect on message boards or obsess about on podcasts. On August 13th, 2018, Shanann Watts came home from a work trip. Her husband Chris strangled his pregnant wife to death, burying her body near one of his work sites, and then dumped his two other children, who he had smothered to death, in an oil vat at the same scene. He was an absolute monster, and the theory is that he basically wanted to wipe away one family life so he could start another one with his mistress.

Early body cam footage of Chris speaking to police officers in his home about where Shanann and the girls might be is arguably the most unsettling in the film. Mere hours earlier, this man watched the life come out of his wife’s eyes and brutally killed his daughters, and he’s there pretending to be concerned about where his family might be, caught on camera talking to cops. It’s a great example of the dead-eyed manner in which sociopaths can move through this world. He’s remarkably calm and believable. It’s scary. (In fact, he's too calm. If my wife and kids were gone, I'd be in full-blown panic, and the cops must have been instantly suspicious at his lack of emotion.)

“American Murder” cuts back and forth between August 13th and the investigation of the next few days with footage from Facebook and text messages about what might have led Chris to that point. Much of it focuses on the increasingly poor sex life between Chris and Shanann, which led her to believe he was cheating (he was), but I’m not sure what is gained by seeing personal text messages from Shanann about her lack of intimacy with her husband. And it’s a beat that the filmmakers hit too often, almost as if they’re reaching hard for the “why” of this case, trying to figure out what led Chris to such a horrible decision, but invading Shanann’s privacy to do so.

More successful is the amount of time director Jenny Popplewell devotes to showing the interrogation of Watts after a failed lie detector test. It’s interesting to see the detectives push at Chris, pulling his story from different directions until it falls apart. Those who like procedural investigative docs should watch the interrogation here. It’s really well done, especially as they push at his emotional buttons, even bringing in Chris’ father to be someone to whom Chris could finally confess.

As a big true crime fan, people often ask me why the genre is so popular, and I think the theory that it’s rubber-necking or morbid is dead wrong. I think it actually provides a strange, even subconscious sense of comfort for most fans. The bad guys on “Dateline NBC” are almost always caught. And the stories almost always unfold in a “that couldn’t happen to me” way. My husband isn’t cheating. My husband isn’t abusive. Most crimes are committed by people the victim knows and I don’t know a murderer. They provide a sense of safety by othering crime. One thing I will say about “American Murder” is that it does the opposite of this, reminding one of the banality of evil. The potential of it is everywhere. Even in the family next door. 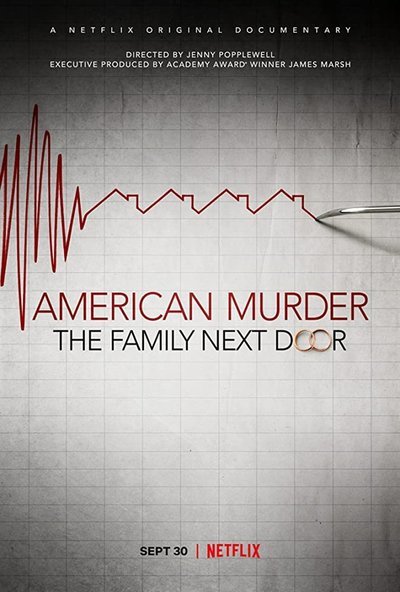 American Murder: The Family Next Door (2020)