Under the circumstances, the title "American Chaos" amounts to a club that viewers can beat the movie over the head with. Directed by Jim Stern ("Every Little Step"), it's an earnest but unformed movie that tries to offer a snapshot of the United States of America throughout 2016. The story follows the presidential election from the primary season through the eventual contest between Democratic candidate Hillary Clinton and Republican Donald Trump, the surprise victor and probably the closest thing to a primary author of the aforementioned chaos.

How did we get here? Stern asks. Were there warning signs that everyone missed? What qualities did Trump voters see in their candidate that were legitimate, and what qualities did their project on him wrongly, for their own, possibly inexplicable reasons? What tangible, credible alternative did he offer to Clinton? Were Clinton's flaws accurately assessed or exaggerated? Was anyone involved with the process, or anyone in the voting population, truly operating from a detached, rational perspective, or has the entire country devolved into mindless tribalism?

Stern, who does his best impression of an avuncular pot-stirring Everyman/Host, travels the country posing and eliciting these questions and more. Some are explicit, others implied, and still others are probably imagined by this particular viewer out of frustration with a movie that can't seem to figure out what it is. More so than most election year postmortems, this one will inspire subjective and admittedly unreliable takeaways, with some viewers feeling that Stern doesn't do a good enough job of interrogating the talking points of Trump voters, and others feeling that he talks too much as it is and is just doing a credible impersonation of an impartial guide when he's actually coming from a deeply partisan place.

Whatever your takeaway, though, it'll be hard to shake the feeling that "American Chaos" is badly in need of refinement, a structure, or another draft or two, or at least some tough notes demanding to know what the point of the exercise is supposed to be. As an effort at understanding the opposition (Stern tells us straight-out that he's a Chicago Democrat who grew up idolizing Robert Kennedy) it deserves a B for effort, if you're in a charitable frame of mind. But it's disorganized and erratic, jumping from thesis to thesis and location to location, sometimes seeming to pride itself on adopting a nonjudgmental "I'm just listening" attitude, other times recoiling in disbelief and outrage when, say, a Trump voter suggests that a hypothetical president-to-be (in this case, Clinton) has the power to simply abolish the Second Amendment of the Constitution immediately after taking office, and strongly implies that killing her with a firearm is an acceptable answer to his ignorance-stoked fears.

Sometimes Stern sees fit to correct the more egregious or bewildering statements of Trump voters on the spot. Other times he does it with supplemental interviews with historians, sociologists and other expert sources; many of the latter come across, visually and vocally, as stereotypically aghast "coastal elite" caricatures, conforming to stereotype just as surely as the Trump voters he's selected, with their potbellies and drawls and regurgitated Breitbart and Fox News Channel stories. Once in a while you meet a genuinely original person, such as the older woman who is identified as a "Mensa member" and seems absolutely convinced that only Trump is standing between the republic and the abyss. There's not much rhyme or reason to when Stern decides to intervene and become more active and when he sits back and strokes his chin and smiles warmly. Sometimes he seems to be on a very sincere listening tour, while other times he seems to be giving interviewees enough rope to hang themselves (arguably a pointless exercise, considering that Trump won and is, as of this writing, still president).

For the most part, "American Chaos" traffics in the same imagery, locations and political reportage cliches that draw eye-rolls when encountered in the pages of the New York Times: the jes' folks, nearly always white and usually middle-aged or elderly, holding court in diners and bars in towns where the milk train don't stop no more, etc. Stern visits the border, where white Americans (and a couple of Mexican-Americans) compare undocumented immigrants to foreign invaders. He goes to Matewan, West Virginia, the better to fluff up a muddled thesis that (I guess?) the Democrats and the Republicans are the political equivalent of the Hatfields and McCoys, feuding just to be feuding, or something. He treats us to a theory that in every presidential race since the 1950s, the more charismatic candidate that voters "want to have a beer with" has won, even though by his own admission not every race really proves that point; 1972 is at best a tossup, and 2000 doesn't really fit any template, and in general, this kind of thing is better left to Cliff Clavin.

There are visits to coal mines that haven't been active in years and now function mainly as museums of obsolete industrial technology. This is part of a slight detour that's concerned with industrial change's effect on politics and rhetoric. It's irritating at first, but then Stern builds it out to the point where it seems as if it could've been the basis of a leaner, more pointed and ultimately more engrossing feature than the one Stern delivered. As Stern points out, the white working class industrial laborers that Trump fetishized throughout his campaign (one of his only areas of rhetorical overlap with the white American left, strangely) were never going to get their old jobs back, even if their beloved industries did return, because automation is the future, and the present. 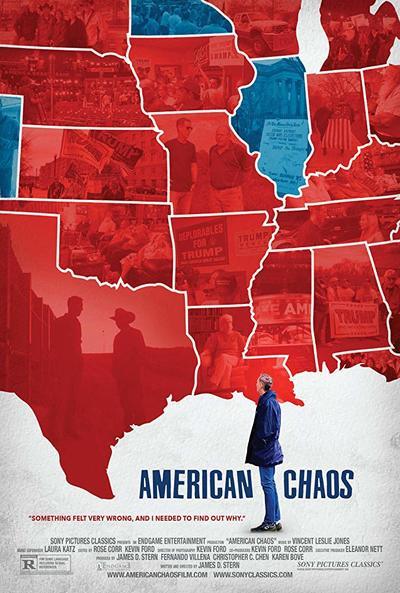 Rated R for some language including sexual references.