Alvin and the Chipmunks: Road Chip

In the opening scene of "Alvin and the Chipmunks: The Road Chip," Alvin, Theodore, and Simon, the three chipmunks, throw a surprise birthday party for their dad/legal-guardian Dave (Jason Lee). But things get out of hand. Hundreds of people show up. A half-pipe is erected in the backyard and skateboarders careen through the air. A DJ cranks the tunes. All of this happens before Dave even arrives. Dave finally gets home (he saw news of his party trending on Twitter), throws everyone out and gives the chipmunks a good scolding. After that, the plot creaks into gear, but the opening party represents what is best about the movie: it's pure mayhem and it's entirely silly. Of course it's silly: a chipmunk is hanging onto the rim of a skateboard as another chipmunk bumps and grinds on lawn furniture below. While there's a lot that is gross (literally: fart jokes, poop jokes, crotch-hits, burps, urine, etc.), the whole point of the movie (and it's great that it has a point at all, considering the material) is that it is a series of random events where the chipmunks either incite a riot or calm one down with their music. Reminiscent of The Muppets road trip in "The Muppet Movie," or of the musicals of Judy Garland and Mickey Rooney (i.e. "I've got a barn, let's do a show!"), or of those old comedies where the forces of anarchy bust up snooty drawing room parties, "Alvin and the Chipmunks: The Road Chip" embraces mayhem.

The chipmunks are Alvin (the ringleader), Simon (the glasses-wearing nerd), and Theodore (the roly-poly tag-along), voiced by Justin Long, Matthew Gray Gubler and Jesse McCartney, respectively. Dave, after the Birthday Bash Gone Rogue, lets them know he is extremely disappointed in their behavior. He is dating a new woman named Shira (Kimberly Williams-Paisley), and he wants the chipmunks to be on their best behavior when they finally meet her. On a group outing to play miniature golf, the mischievous chipmunks meet Shira's teenage son Miles (Josh Green), who makes jokes about super-Gluing them together. While the chipmunks like Shira, they are terrified that Dave is going to propose to her while on a trip to Miami. Miles is awful, he couldn't be their brother! The chipmunks also have abandonment issues, fearing Dave will no longer love them if he got married. They find an unlikely ally in this attitude in Miles, who doesn't want a new dad at all. The four set off on a crazy trip from California to Miami, to track down their parents and bust up the proposal before it's too late.

On the first leg of their trip, via plane, Theodore, holed up in cargo, sets loose all of the animals who then rampage down the aisles, parrots, goats, monkeys, freaking everyone out. The flight has to make an emergency landing. A mentally unstable U.S. air marshal (Tony Hale) proceeds to lose every last shred of dignity, sanity, and self-respect as he chases those evil chipmunks (who ruined his pristine flying record) across the country.

After the chipmunks find themselves on the No-Fly List (their pictures on the FBI's Most Wanted page), they take off by car, stopping off in Texas, where they perform on a wooden sidewalk, as a bunch of boot-tapping cowboys look on, throwing tips in the box. Later, they play in a ratty dive bar nearby and transform it into a raucous scene out of "Urban Cowboy" complete with line-dancing couples whooping it up. In the New Orleans French Quarter, they join an already awesome jazz parade, and transform it into Mardi Gras by whipping the crowd into a frenzy with a caffeinated version of "Uptown Funk." Director Walt Becker has a good feel for big energetic crowds. These are the most entertaining scenes in the movie.

There are some fun cameos, the best one being John Waters. He's there for just a second, but it's great, especially the comment one of the chipmunks throws his way. Jennifer Coolidge, a genius, is completely under-used as Dave's bizarre next-door neighbor. You can tell her character is insane, because Jennifer Coolidge brings insanity with her wherever she goes, and yet she's not given much room to do anything, unfortunately.

"Alvin and the Chipmunks: The Road Chip" is not a movie for kids that is embarrassed to be a movie for kids. The bathroom humor is a bit much, the product placement is out of control, and some of the women are too scantily clad for the audience demographic (enough with this already! Let kids be innocent as long as possible, please!) But in general, "Alvin" is funny and, sometimes, a little bit sweet. There's too much plot, and who really cares about Dave and Shira, but Tony Hale is a great villain, and the road trip sections are pure, uncynical mayhem. When the movie wants to get sentimental, it has the flexibility to do so. "Road Chip" also has a nice subtle message about families: families don't have to look a certain way. Families are not just people related by blood. A family is people who love and take care of each other. 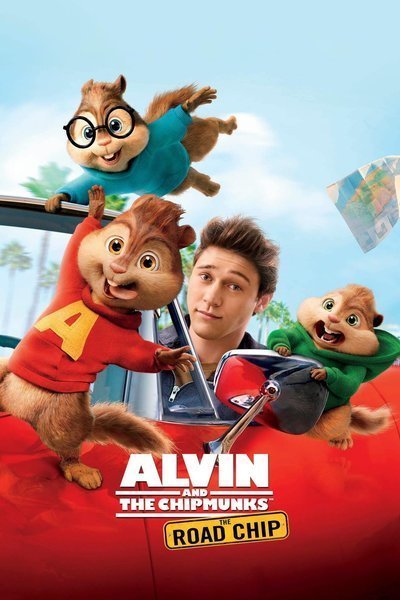