All the Bright Places

“All the Bright Places,” based on the best-selling novel of the same name, is chock full of the kinds of Young Adult tropes that aim to make viewers swoon and soak their hankies with tears.

Elle Fanning and Justice Smith are gorgeous together and have lovely chemistry as high school seniors from opposite rungs on the social hierarchy who initially clash but eventually forge a sweet friendship, and much more. These are the kinds of characters who rely on snappy, quirky dialogue to work through deep sorrow, who quote Virginia Woolf to each other in late-night message exchanges to express how they feel in their burgeoning relationship. Director Brett Haley (“The Hero”), working with cinematographer Rob Givens, makes small-town Indiana look like the most blissful and magical spot on Earth, a place full of winding country roads for golden hour bike rides and sun-drenched, lens-flared kisses in the middle of nowhere. And the score from Keegan DeWitt, who also wrote the music for Haley’s charming “Hearts Beat Loud,” heightens the feeling of young romance.

But “All the Bright Places” also has more substantial intentions—some of which it spells out in literal and repetitive fashion toward the end—and may do some real good for young people feeling isolated, misunderstood, and in need of help. Author Jennifer Niven wrote the script with Liz Hannah, who previously co-wrote “The Post” and last year’s criminally underappreciated “Long Shot.” They’ve provided the characters with an authenticity to their connection, even within the often hyper-verbal nature of their dialogue and the adolescent instinct toward melodrama.

Fanning’s Violet is pretty and popular with a hunky boyfriend, and she comes from a comfortable family. Smith’s Theodore—or Finch, as he prefers to be called—is known around school as “The Freak” for his sometimes-erratic behavior, and while he has a warm and loving relationship with his older sister (Alexandra Shipp), his parents are out of the picture. None of that matters, though, when they encounter each other at the film’s start. She’s standing on the ledge of a bridge, contemplating jumping; he sees her during his morning run and gently talks her down. And while their subsequent interactions in the high school hallways are awkward, neither of them can deny this significant moment they’ve shared.

Finch won’t let Violet move on, despite her efforts. So when their teacher gives the class an assignment before graduation to wander Indiana, seek out some of its significant locations and present a report on them, Finch chooses Violet as his partner—and we soon learn why she refuses to get in the car with him to go on these journeys. Violet’s older sister died in a car accident at the exact spot on the bridge where she pondered taking her own life, and by looks of the silent, stilted interactions she has with her parents (Luke Wilson and Kelli O’Hara), healing has been hard. But Finch has his own troubles, as evidenced by the elaborate, color-coded sticky note system on his bedroom walls, reminding himself of things to be happy about and encouraging words. And the lengthy scar lining the right side of his torso, which we see when he undresses to go swimming in the lake, suggests deep physical and emotional trauma. So does his propensity for absenteeism as he takes off for weeks at a time, worrying his few friends who can’t find him.

All of which makes “All the Bright Places” sound like a bummer. It is not. Smith is ebullient and charismatic as the intelligent, sarcastic Finch, especially in his flippant exchanges with exasperated adults like Keegan-Michael Key as the school’s principal. But his character is also given to quick bursts of violence, and Smith navigates both extremes with conviction. You might be tempted to think of the character as a male version of a Manic Pixie Dream Girl, so individual and irreverent is he as he tries to save the sullen Violet. (Her own boyfriend isn’t nearly so sympathetic, asking her at a party where she doesn’t want to be: “How much longer are you gonna act like this? It’s been months.”) You get the sense that Finch is genuinely interested in Violet, but he’s probably also grateful for the opportunity to think about somebody else’s problems for a change.

Clearly they will meet in the middle and make each other better, maybe even whole again. Fanning grows increasingly radiant and effervescent as her initially apprehensive character gets to know Finch and opens herself up to new experiences. You feel as if you can see her physically blooming as bigger and bigger smiles spread across her face.

“It’s nice to have a friend again,” she says as they’re driving around from one adventure to the next, with an understatement that’s quietly moving.

“All the Bright Places” rests on the notion that you never really know what others are going through, that people who seem to have it all together on the outside might have a lot more going on underneath. Perhaps that’s not a novel, earth-shattering concept, but it’s one that’s as worthwhile as ever. And the film’s frank talk about mental illness, suicidal thoughts, physical abuse and family loss is so potent and necessary that it makes you wish Fanning hadn’t been saddled with a treacly narration at the end, summarizing the themes. Young people are bright—they can handle these kinds of complex concepts. 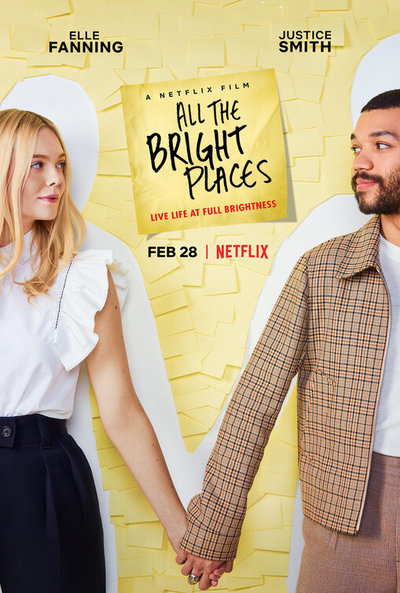