The modest scope of "Hearts Beat Loud," a new film directed by Brett Haley, which he co-wrote with Marc Basch, is its strongest point. It's refreshing to watch a film that doesn't feel obligated to go for the brass ring (of emotion, or social commentary, or even plot). Low-key scenes play out in a casual way, with simply drawn characters eloquently filled in by the talented cast. There's a relief as an audience member when you don't get the sense that actors or director are pushing for catharsis, for a message, to keep you interested. But "Hearts Beat Loud" could use more urgency in the telling, more sense of what is at stake for the characters.

Frank Fisher (Nick Offerman) is a widower who owns a record shop in Red Hook, a Brooklyn neighborhood far removed from the bustle of Manhattan. If you go to Red Hook, you can feel the ghost of its industrial shipping-port past, the warehouses, the waterfront, its isolation, but the winds of gentrification are blowing. Gentrification is not the topic of "Hearts Beat Loud," but it is the worrisome undercurrent for the main characters. Frank has owned Red Hook Records for 17 years, and his landlord Leslie (Toni Collette) has held off on raising the rent because she loves the store and she likes Frank. But it's time to sell, so Frank puts up signs in the window saying "Everything Must Go" (which might have been a more evocative title for the film). Frank's daughter Sam (Kiersey Clemons) is taking pre-med classes during the summer before heading out for college on the West Coast. It's the end of an era, in more ways than one. Frank and his late wife had a band together, and he and Sam unwind with impromptu jam sessions, writing songs at the end of a long day. It's one of the ways they bond. But all of the impending changes make Frank determined to create a band with his daughter, even if she's not particularly into it. He's let go of so much, he doesn't want to let go of her.

"Hearts Beat Loud" simmers on a low boil, and this is sometimes in its favor. Frank hangs out with the stoner owner (Ted Danson) of a local Red Hook dive, and sometimes does karaoke with Leslie. Sam meets a girl (Sasha Lane, from "American Honey") who works in an art gallery, and the two begin a sweet romance, poignant because their time is limited. When Frank uploads one of the songs he and Sam recorded to Spotify, it's a modest "hit." Frank suggests maybe Sam should delay college so they can start playing gigs. "Hearts Beat Loud" doesn't go the predictable route, where father and daughter take the indie rock scene by storm. The film is up to something quieter, more realistic.

Clemons is wonderful here, but Offerman is the revelation. Normally he plays big broad characters, and he does it very well. In "Hearts Beat Loud," he is internal, with loss and grief etched into his face. There are times, talking with his daughter, where you can feel the intensity of his emotions, his love for her, his fear of being alone, all things he cannot express. Frank never married again. His daughter is everything to him. He comes alive when talking about music. There's a beautiful moment where he reads some song lyrics Sam wrote, and realizes she must be in love with someone. "Do you have a girlfriend?" he asks her, excited, curious. (It's refreshing to have the "issue" of someone's sexual orientation not be an "issue" at all.) Frank's latching onto the father-daughter band idea comes from a place of pain and fear, and Offerman makes that very clear, without drowning the character in self-pity or self-importance.

There's a lot of music in "Hearts Beat Loud," with a couple of original songs composed by Keegan DeWitt ("Cold Weather," "Listen Up Philip," "Queen of Earth," "Kate Plays Christine," "The Incredible Jessica James"). The songs—performed by Offerman and Clemons—are a huge part of the texture of the film. Their performances play out in full, so you're given a chance to get swept away in Clemons' strong expressive voice, in the dynamic between the two actors, the love and appreciation they have for one another, the fun they have together.

Some aspects of "Hearts Beat Loud" feel sketched-in, almost like a first draft. Sam is shown going to only one pre-med class, where the teacher, in a lecture about the heart, mentions how falling in love makes the heart beat faster, and then says, "Okay! Let's talk about ventricles!" Despite the rigors of pre-med programs, Sam has unlimited free time to play music with her dad and hang out with her girlfriend. There's a meandering pointless feeling to some of the scenes with Ted Danson. It's like he's there as a character just to give Frank someone to talk to. Leslie is not as developed a character as she could be, although Collette brings nice shadings to her work, as always. And Frank's suggestion that Sam put off college so they can start a band isn't explored as the truly delusional idea that it is. He's literally holding her back! The film is so easy-going towards Frank that all kinds of intriguing and possibly intense emotional avenues remain unexplored. The heart of the film could have beat just a little bit louder. 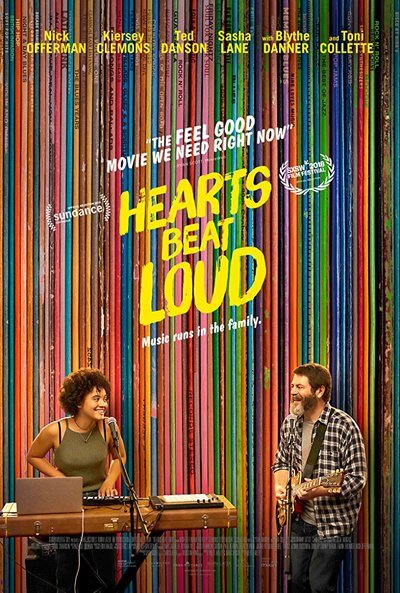 Rated PG-13 for some drug references and brief language.