You may love him best as Cher’s biker boyfriend in “Mask,” or in his more recent turn in one tremendous scene as Lily Tomlin’s long-ago love in “Grandma.” He even got to say the actual words “The Dude abides” as the mysterious bowling alley stranger in “The Big Lebowski.” This dude is iconic.

Director and co-writer Brett Haley is clearly aware of that, placing Elliott front and center for a rare leading role. But while it’s a pleasure to luxuriate in the silver-haired 72-year-old’s distinctively handsome features and deeply resonant voice, there’s not much to the character he plays or the story that surrounds him.

“The Hero” is loaded with clichés about the fickle nature of Hollywood, May-December romances and last shots at happiness later in life. And the repetition of a series of remorseful, dreamlike images from the past does nothing to increase their poignancy. And yet, Elliott’s mere presence makes the film more watchable than it should be for longer than you’d expect.

He stars as Lee Hayden, an aging, ailing movie star whose best work was in a Western that came out 40 years ago. He’s been riding on that success, culturally and financially, with diminishing returns ever since. These days, he gets by as a voiceover artist; when we first meet Lee, he’s in a recording booth repeating the same inane line about barbecue sauce into a microphone ad infinitum. The awareness of and affectionate toying with Elliott’s real-life persona is one of its primary charms, but that only lasts for so long.

Lee mainly stays holed up in his rustic Malibu canyon home, smoking weed and drinking bourbon. He has a cordial relationship with his ex-wife (Elliott’s real-life wife, Katharine Ross, lovely in just a couple of scenes) but he’s estranged from his daughter (Krysten Ritter in an underwritten role) and struggles to reconnect with her.

Occasionally, Lee ventures out to see his only friend, Jeremy (Nick Offerman), a former TV series co-star who also happens to be his drug dealer. During one of those hazy visits, Lee meets another customer of Jeremy’s: the sexy, saucy Charlotte (Laura Prepon), with whom he begins an unlikely romance. And it’s not even unlikely because she’s half his age. (She also happens to look a lot like his daughter, which the script from Haley and Marc Basch never mentions.) There’s just not a lot to this character, so their connection never makes sense. She’s a stand-up comedian. She likes poetry—which “The Hero” drives home by having Charlotte read to Lee from an actual book of poetry. And that’s about it.

But what Charlotte doesn’t know—what nobody knows—is that Lee has pancreatic cancer, and not much longer to live. Haley renders Lee’s contemplation of his mortality as a series of surreal flashbacks to his signature role—in a movie called, appropriately, “The Hero”—but with the star in his current state. Just as the supporting figures feel like concepts rather than actual people, so, too, does Lee himself. “The Hero” wallows in decades-old success and present-day regret, but the man at its center remains stoic and elusive.

As a result, the film as a whole feels like a fine short that’s been stretched out to feature length. Subplots like an accidental viral video and long walks on a lonely beach function more as padding than as a statement on our culture in general or this man’s place in it.

Elliott could sell us anything, or course—barbecue sauce, whatever—just by showing up and being his formidable, glorious self. But he could use some meatier material. 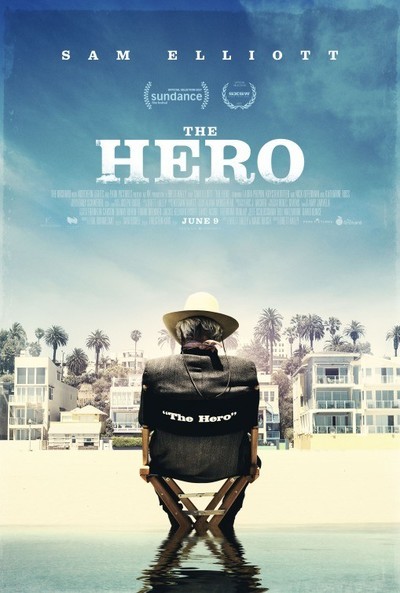