"All My Life" is based on the true story of a young couple who were planning their wedding when the groom-to-be was diagnosed with terminal cancer. It does not try to wrestle with existential issues or give more than brief coverage to the physical and emotional ravages of cancer treatment. It has all the gloss of a Pottery Barn catalogue and all the depth of a "hang in there" greeting card, but if you are in the mood for a sad story about very attractive people learning to get the most out of the time they have, it will do.

The morning after they first meet at a sports bar, Solomon Chau ("Glee's" Harry Shum Jr.) and Jennifer Carter (Jessica Rothe) get together to go for a run because she wanted to see him again even though she hated running. She learns that he's an amateur chef, and asks him to cook for her. "You mean now?" "Now or never."

And "now or never" becomes something of a motto as the two young people quickly fall in love, move in together, stage a flash mob proposal, and start planning the wedding, with the groom in charge of the cooking.

But Solomon gets sick. It's a movie illness, though, meaning that Shum continues to be his very handsome self with a full head of hair. And the early reassurances from the doctors give way to diplomatically delivered but terrifying prognoses. First it is, "the level of aggression is very concerning." And then it is, "we're moving into quality of life considerations."

What does quality of life mean when you are in your 20s and in love? What does a wedding mean when it is not the beginning of the story, but the end? Aren't happy endings supposed to last "ever after?"

Jennifer tells us the average life span is 27,375 days, but it's only the days where something special happens that we remember. She and Solomon try to put a lifetime's worth of memories into the days they have together, including a Make-a-Wish-style wedding with a GoFundMe organized by their friends. Solomon worries that "people will just see a widow in white," but Jennifer reassures him that, "I'm your bride and that's all you're allowed to see."

Screenwriter Todd Rosenberg includes a couple of sweet moments as Solomon and Jennifer are falling in love and working out their plans. There's the cutest romantic toothbrushing scene since "Bring it On." They clearly have fun negotiating a sped-up set of parameters, from closet space to whose sofa they will keep, when they impulsively agree to live together so that Solomon can quit the job he hates to start working as a chef. And there's no clearer depiction of the clarity of the couple's new priorities than Jennifer's calm response to a stain on her wedding gown.

It's always pleasant to watch attractive young people fall in love, and it's automatically touching when they experience loss. But compared to films like "After Everything" or even "Me Before You," "Clouds," and many more all the way to "Love Story," the characters and their responses to their challenges here are colorless and superficial. Their hopes and dreams for the future shrink down to a big wedding with a fancy gown and a romp in a fountain. Solomon, who is known for his gift with spices, deserves better than this bland version of his story. 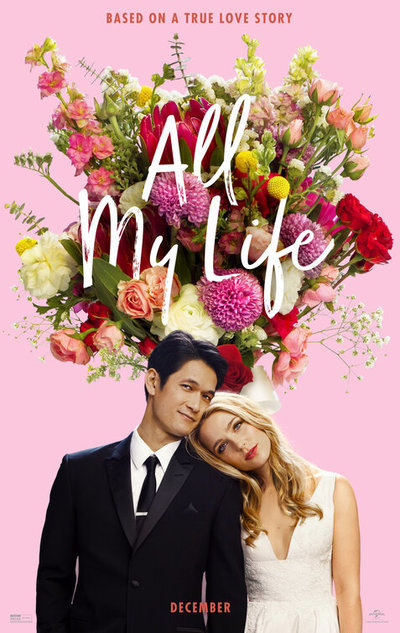 Ever Carradine as Gigi