Zach Sobiech was a high school senior when he uploaded his song, "Clouds," to YouTube. It became a viral hit, leading to a recording contract and a concert performance. Wildly enthusiastic fans sang along with the chorus: "We'll go up, up, up but I'll fly a little higher, go up in the clouds because the view's a little nicer."

The idea for the lyrics came to Zach when he was in an airplane, but the inspiration was deeper than just looking out the window. The plane ride was a return from a visit to Lourdes in hopes of a miracle following a terminal diagnosis.

Zach was originally diagnosed with bone cancer when he was 14, and as this movie begins four years later, he is 17 and has completed 20 rounds of chemotherapy. His classmates are working on their college application essays. As they examine their pasts and look forward to their futures, Zach hears from his doctors that his cancer is no longer treatable. "Clouds" is the story of his last months, his first love, his best friend, his hit song, and the impact of his music and his diagnosis on those around him.

"Teens think they're invincible," Zach (Fin Argus) tells us that. Coping with cancer is what he is used to. That means more than getting used to being bald, throwing up, and using crutches. It means putting a lot of effort into a perpetually upbeat manner to make the people around him feel comfortable. His best friend is Sammy (Sabrina Carpenter). They have the kind of easy understanding of people who have known each other forever. When she panics at the last minute and says she cannot perform at a school concert, he goes on instead and has the audience laughing along with him as he sings the mocking song, "I'm Sexy and I Know It." When she tries to ask him how he is doing, he says, "It's just tough juggling high school with undercover assassin work."

And when he gets the bad news, his first reaction is, "Can I quit chemo?" Whatever time left will be as close to normal as it is possible to be. This film is particularly perceptive on the issue of what it means to try to be "normal" under excruciatingly painful circumstances. As everyone in the family, including Zach and his parents (Neve Campbell and Tom Everett Scott) and his siblings keep up a sometimes brittle cheeriness, perhaps trying to convince themselves as well as each other, we can see the strain. His mother gives him glass-half-full advice and looks up Lourdes online and insists they take a family trip just in case they can get a miracle. His father arranges for Zach to have a chance to drive his dream car. We see how the pressure and the grief and the frustration has frayed their marriage.

But mostly the focus is on Zach, and the way that his limited time affects the normal teenage concerns. There's a girl that he likes, Amy (Madison Iseman of the "Jumanji" movies). He needs to come up with an impressive "promposal." He needs to explain why he never showed up on their first date—because he was in the hospital. And, he needs to let himself be loved, even if he knows that it will cause her pain.

Zach and Sammy upload their song. It takes off. And in an amusing nod to Tom Everett Scott's best-known role, there is a scene exactly parallel to "That Thing You Do" when the song is first played on the radio.

Lil Rel Howrey is a warm and vibrant presence as Zach's teacher. As he advises the class on writing their college application essays, he quotes poet Mary Oliver: "Tell me, what is it you plan to do with your one wild and precious life?" For the rest of the class, it is a prompt for reflection to help them get into college. For Zach, the question is vital and it is urgent. For the rest of us, this movie is a reminder that we should not have to wait to fly above the clouds to keep our lives wild and precious. 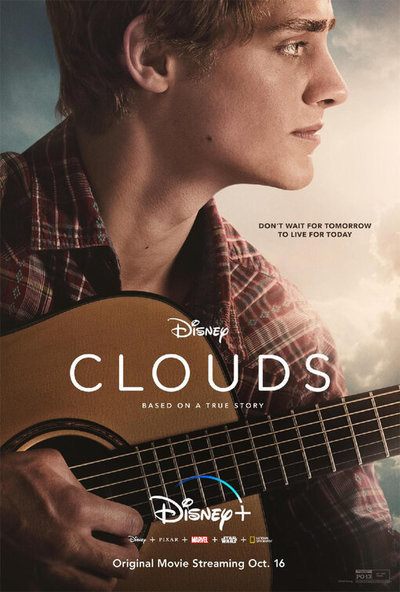 (based on the book entitled "Fly a Little Higher" by)