Serious illness is its own planet. All of the quotidian details and concerns of our world, from the small (Will I ever find a parking space?) to the big (Will I ever get a job I like?) to the enormous (Will anyone ever love me?) shrink to nothingness when the only question is: Will I live? “After Everything,” originally called “Shotgun” in festival showings but presumably re-titled so no one would think it was an action movie, is a bittersweet love story, bitter because the couple meet just as the guy is diagnosed with cancer, but sweet because the young couple is so believably tender and loving.

Writer/directors Hannah Marks and Joey Power have made an intimate little drama that feels fresh because the diagnosis turns the usual love story upside down. In life and especially in movies, romance tends to follow the same route: back, forth, up, down, hesitation, trust, hope, hurt, healing, on the way to true connection and commitment. Underlying it all is the sense of endless time, especially when the couple is as young as these two, in their early 20’s. Elliot (Jeremy Allen White) and Mia (Maika Monroe) are still young enough to feel that they have all the time in the world. They are also young enough to take on a challenge that would daunt anyone even five years older, because they cannot know how hard it will be, or even how it will be hard. It is not just that they do not know the relentlessness of critical illness for the patient and the caretaker. They do not know how little they know themselves or each other.

Marks and Power have an appealingly pointillist storytelling style, letting us glimpse what we need to know instead of burying us with exposition. A brief opening montage shows us Elliot’s careless and almost carefree life of hanging out and partying. And then, in the subway station, he sees Mia, and recognizes her as a customer of the sandwich shop where he works. She will not give him her number, but she takes his. When they go out for the first time, he has just received the diagnosis. What the first doctor told him not to worry about, the specialist (Marisa Tomei) has told him is cancer. He has to start chemo and radiation immediately—after he has banked some sperm, in case he wants to have children some day.

So, on their very first date, they face a major existential crisis that he has just begun to process. No time for getting-to-know-you pleasantries like “Where did you grow up?” or “What kind of movies do you like?” Instead it’s straight into, “Have you told your parents?” and checking out the treatment options and survival prospects on WebMD. That allows Marks and Power to skip the familiar romance movie beats because we are in the midst of a literal life and death situation right from the beginning. Elliot tells Mia to leave him before it gets worse, and she refuses. They do not realize the bigger challenge will be when he gets better.

White and Monroe create imperfect but always likable characters and the direction is brisk but assured. The film is at its best when it surprises us, as with a fantasy sequence where Elliot imagines a lingerie-clad and very willing Mia to help him out at the sperm bank, or when they smoke some “medicinal” weed with Elliot’s warm and supportive parents. It's the film's one-note secondary characters that become grating, especially the couple’s roommates—even Sasha Lane cannot make much out of smoking weed and obsessively watching true crime dramas and all that DeRon Horton’s character has to do is try to make Elliot feel bad for not spending more time with him. But as long as the focus is on Mia and Elliot, the film is involving and moving. 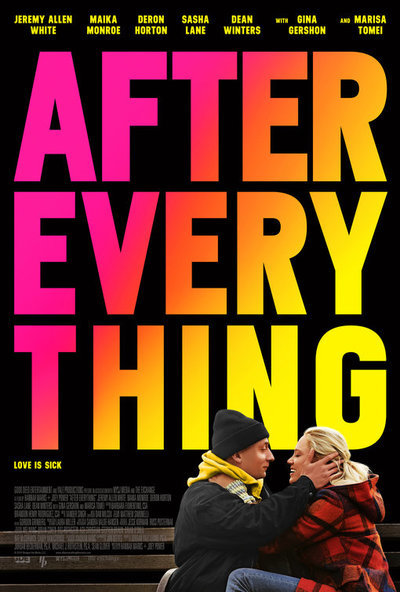