All I See is You

This is a movie so particular in its godawfulness that it makes an exhausted reviewer want to come up with the film equivalent of Tolstoy’s observation of happy families versus unhappy families. But of course, all films, good or bad, are good or bad in their own way. I don’t know, though. “All I See Is You” seems extra-uniquely bad somehow.

Blake Lively and Jason Clarke play Gina and James, a married couple living in Bangkok (“Thailand,” a title helpfully adds). Gina is blind, or, kind of blind; the movie gives us shots from her point of view from the outset, and there are flashes of color but no discernible shapes in them; more vivid, and ostensibly stimulating, are the shots contrived to show us what happens in Gina’s imagination, as a lovemaking session with James is rendered, via CGI, into a mass-body semi-orgy abstraction. Director Mark Forster, working from a script he co-wrote with Sean Conway, wants the viewer to see through Gina’s eyes and mind in a huge variety of ways; and so, this movie is, among other things, over-directed within an inch of its stillborn non-life, replete with shots through distorting lenses, ostentatious variations in color grading, high angles, low angles, mirrors, glass reflections, on and on it goes. Kudos to the producers for getting Forster and cinematographer Matthias Koenigswieser every lens and crane and drone they could have possibly wished for.

While Gina is blind now, she wasn’t always; fragments of conversations with her sister Carla and several fragmented flashbacks reveal she lost both her sight and her parents in a car accident years ago, when she was still a teenager. But wait! Doctor Danny Huston has a surgical cure, at least for Gina’s right eye. And so an operation is performed and Gina enters the world of the seeing. And she does not like everything she sees.

“Are you afraid she’ll leave you for some better-looking guy?” asks Ramon, James’ feral artiste brother-in-law, when Gina and James arrive in Spain to visit him and Carla. James says no, but one of the things that gets shaken up by Gina’s return to the sighted world is a certain sexual curiosity. Gina allows Ramon and Carla to take her to a live sex peep show, and later, on a train, James allows Gina to tie him up and blindfold him, at which he soon balks. The whole business, though, is recorded on a 360-degree video camera, and after the couple returns from their trip, James watches the video obsessively as Gina grows more frustrated with their living conditions and their inability to conceive a child.

The overheatedness of the moviemaking aside, “All I See Is You” fails to engage because it has no characters. The actors play roles, but they’re bereft of personality; they have no interests, no opinions, no animating force. Forster clearly disdains exposition, and who can blame him given how clunkily it’s used on most films. But at some point you’re thinking: why is this couple in Thailand? (It’s revealed in a throwaway line that James works in insurance, while Gina has no vocation or job. But still.) How did they meet? Things like that. Might help to provide some dimension. But no.

Certainly the performers don’t help. Blake Lively may be a very nice person (and then again, she may not be), but as a screen presence she’s ersatz in a way that’s too perfect for these terrible times: she’s poised without showing any refinement, her appearance is a blueprint of sex appeal but she exudes exactly zero eroticism, and her demeanor overall suggests a void of intelligence, albeit one well-trained in putting on faces that say “thoughtful.” Clarke, with little to latch onto in the script, furrows his brow and lets his American accent run away from him over-frequently.

Once the film shifts modes, a little over an hour in, from “Scenes from a Marriage You Don’t Care About” to “Bad Gaslighting,” well, there’s a certain novelty value for a couple of minutes. As in the novelty value of “I thought this couldn’t get worse.” 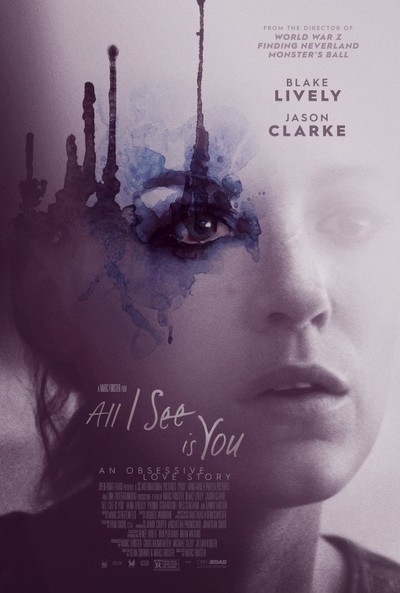