Alice Through the Looking Glass

I removed my eyeballs from my head as soon as I got back from "Alice Through the Looking Glass" and cleaned them in a sink. I could have left them in and only cleaned the fronts, but I didn't want to take any chances. They're still in there, soaking. I am touch-typing this review. Wish me luck.

"Alice Through the Looking Glass," in which Mia Wasikowska's Alice travels into the past to prevent the Jabberwocky from roasting the parents of the Mad Hatter (Johnny Depp), is a sequel to Tim Burton's 2010 film "Alice in Wonderland." Burton is not involved with this one. But that's not as big a change as you think, because Burton wasn't what you could really call "involved" with the original. Sure, he directed it, and it made approximately 647 gazillion dollars worldwide, but it had no poetry, no grit, no soul. It even had weak character design, direction, lighting and comic timing—areas where, in the past, Burton at least seemed able to amuse himself. It might as well have been made by a Tim Burton fan whose main storytelling experience was directing TV ads for candy.

Replacement director James Bobin ("Muppets Most Wanted") and returning screenwriter Linda Woolverton ("Beauty and the Beast") have made a film that carries on the Burton film's tradition of quality, which is, "Professional, in the sense that the people who made it were compensated." All the major characters from the first film return, including the Hatter and the feuding Red Queen (Helena Bonham-Carter) and White Queen (Anne Hathaway). Carter has her usual grand old time, but the Red Queen is sidelined through most of the movie, as is the White Queen, and when they finally get a halfway decent scene together, the movie is about to end and their previously established rivalry is about to be turned to mush for no discernible reason.

Alice's feminist credentials are satisfied the easy way, by having her do physically brave things (like outrun three pirate ships as a captain in a bizarrely unexciting pre-credits sequence), and by letting her make "brave" decisions whose outcomes are never in doubt. The star's ability to project old-movie pluck and innocence are sorely tested. She's in every scene of the movie, yet it's still a nothing part. Depp makes even less impact. His Hatter is tangential to the action even though the story revolves around his happiness, and he has just two modes, mincing-anxious-fey and vaguely furious. There are a couple of decent CGI-driven action sequences, but no memorable characters or lines, and only one performance, by Sacha Baron Cohen as Time, that could be called memorable—and even that one is essentially a modified Lumiere the Candlestick outfit plus Werner Herzog's accent. The film is dedicated to Alan Rickman, who provided the voice of the blue butterfly (and former blue caterpillar) Absolem. I miss his marvelous honeyed baritone voice, which suggests in just a few brief sentences the bedtime story that might have been.

As in the original, the design is at once hideous and bland—like a rough draft of a CGI-driven blockbuster that filmmakers would show to studio bosses only to ask for more time and money to create something releasable. There is not a single effect in the movie that stirs the mind, a single composition that stirs the eye, a single line worth remembering. Danny Elfman's score ladles Magic and Wonder over every scene, to convince you that what's onscreen doesn't look like a Shrek film as painted by an amateur who idolizes Leroy Neiman.

The scenes where Time contemplates a sea of pocket watches dangling in space, each representing a living or dead soul, should be staggeringly beautiful and scary and moving, because the idea itself is magnificent. What's onscreen looks like an edgy Super Bowl ad intended to restart the pocket watch industry by appealing to ironic millennials. The sky, the watches, the walkway on which Time stands, Time's costume, Alice standing behind him—it all looks neither real nor fake, primitive nor sophisticated. A scene of Alice surfing the minute and second hands of an immense stone clock face (time itself) could have had a talismanic power were it not a compendium of immense yet oddly weightless moving pieces and visual cliches—such as the sudden-zoom-out-to-a-God's-eye-view, a shot nearly every CGI-driven blockbuster feels obligated to do even though it hasn't awed anyone since the original "The Matrix."

But the most offensive kind of film is one that spends an enormous amount of money yet seems to have nothing on its mind but money. You give it, they take it. And you get nothing in return but assurances that you're seeing magic and wonder. The movie keeps repeating it in your ear, and flashing it onscreen in big block letters: MAGIC AND WONDER. MAGIC AND WONDER. But there is no magic, no wonder, just junk rehashed from a movie that was itself a rehash of Lewis Carroll, tricked out with physically unpersuasive characters and landscapes and "action scenes," with blockbuster "journey movie" tropes affixed to every set-piece as blatantly as Post-It Notes.

How many small- or medium-sized films were never funded or released because the entire Hollywood studio apparatus has devoted itself to churning out listless fantasies that are machine-tooled for maximum repeatability and exploitability while claiming to be magical and wonderful?

This is not artistry. It's con artistry. 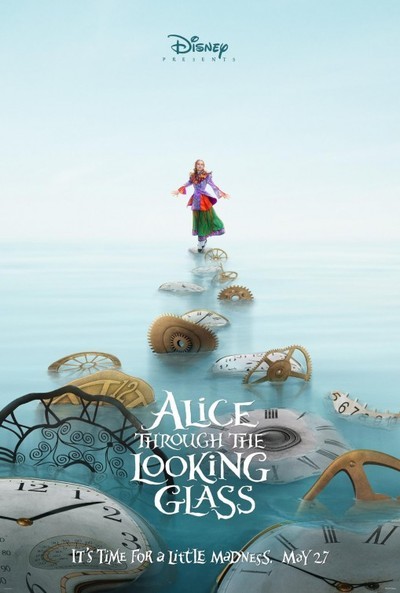 Alice Through the Looking Glass (2016)

Rated PG for fantasy action/peril and some language.