In a self-aware moment from the new live-action “Aladdin,” a character holds up a sketch of three other characters. The sketch is a line drawing done in the style of the hit 1992 animated “Aladdin,” the basis of the movie you’re watching. It’s simple, fun, and direct, more concerned with being delightful than with looking “real.” The remake—directed by Guy Ritchie, with Will Smith taking over for the late Robin Williams in the role of The Genie—flips those priorities. That’s not to say that it’s never fun, because it sometimes is—just that it’s more often lumbering, patchy, meandering, and generally bereft of inspiration. It’s a dancing elephant of a movie. It has a few decent moves, but you’d never call it light on its feet.

Written by John August (“Big Fish”) and rewritten by Ritchie, with music and songs by Alan Menken (and the late Howard Ashman) plus a couple of original tunes intended to qualify the film for Best Original Song Oscars, the film is unfortunately a perfect illustration of an observation by Josh Raby, summing up this era of both Disney features and computer animation: “Using CGI to turn expressive animated films into photoreal reboots feels like using a magic wand to make a toaster.”

This “Aladdin” is still the funny-sentimental-inspirational story of a poor “street rat” who comes into possession of a magic lamp and a magic carpet, summons a big blue genie, and embarks on a scheme to win the heart of a princess and stop an evil vizier from stealing the kingdom away from the heroine’s dad. There are at least two potentially good and somewhat original takes struggling get out of this remake and assert themselves. One is the story of how the genie bonds with Aladdin (Mena Massoud) and tries to secure his own freedom without breaking any genie/master rules. The other is about the princess, Jasmine (Naomi Scott), who’s not merely a spirited feminist who enjoys disguising herself as a peasant and hanging with the commoners, but seems ready to agitate for representative democracy if nudged in the right direction. Neither of these is permitted to seize the spotlight for very long, though. And that’s a shame, because some of the most compelling (though not top-grossing) “live action” remakes of animated films to come out of the Disney studios recently have been ones that jumped off from slightly less beloved titles (like “The Jungle Book,” “Pete’s Dragon,” and “Maleficent,” which retells “Sleeping Beauty” from the witch’s point of view) and created works that felt more like companion pieces, even subversions, than remakes.

This sticks to the beaten path so slavishly that when it departs from it, it’s as if the entire movie had momentarily escaped from bondage, like the genie from his lamp. Will Smith is the only big star in the cast, so it was probably inevitable that he’d be awarded the framing device (he’s a mariner telling the story of Aladdin to his two young children). When he isn’t being asked to re-enact most of the really good lines, jokes and situations from the 1992 version—which is probably 70% of his screentime—he puts his own stamp on the role.

But the opportunities are scarce, so when Smith does depart from the sacred text—mainly during emotional moments, and dialogue-dependent comedy scenes where Ritchie gets to show off his knack for smart-alecky banter—the moments don’t accumulate into a distinctive performance. They just sort of hang there, feeling disconnected from the movie’s reason for existing, which is to draw people into theaters with the promise of seeing the same thing they already knew they loved, but slightly different.

Smith’s co-stars run into the same problem. Massoud has a deadpan comic energy that shines whenever he’s not required to simply re-enact his animated counterpart’s iconic moments. Ditto Naomi Scott as Princess Jasmine, who has a fierce dignity and can’t help it that her big original number—“Speechless,” a song about the silencing of women by the patriarchy, written by two men, “La La Land” and “Dear Evan Hansen” composers Pasek & Paul—feels wedged into the movie like a doorstop. (The motivation for the song, though, is much more organic, and might’ve felt sincere and powerful rather than opportunistic had the movie built to it, or better yet, centered the story on her.) Marwan Kenzari’s performance as the treacherous vizier Jafar departs most strikingly from the original film. Kenzari tries to create something closer to an antihero than a traditional bad guy, and although it’s ultimately more of a riff or a vibe than a strong characterization (the writing lets him down, as it does every character), he’s genuinely scary in the second half. Little kids will be terrified of him.

From the opening “Arabian Nights” number to “Friend Like Me,” “A Whole New World” and beyond, most of the major sequences are the same, although there are a few fresh twists scattered throughout, particularly during the last half-hour. This “Aladdin” is two hours and eight minutes long, 37 minutes longer than the original. This is also part of a trend in theatrical films: perhaps the increasingly long average runtimes of special-effects driven blockbusters are a response to complaints that tickets are too expensive, which is actually a way of saying that real wages haven’t risen substantially since the early 1970s: a longer movie = “getting more for your money” and thus justifies taking the kids, maybe even buying something at the concession stand.

The filmmaking is disappointingly pedestrian: some long tracking shots stitched together with CGI, some “dangerous” chase scenes augmented by CGI, some musical numbers with ostriches and elephants and monkeys and camels, etc, all CGI, and Smith’s genie whooshing around the frame, his broad and CGI-augmented torso and shoulders swiveling and bobbing and weaving while trailing a curiously cheap-looking trail of sparkles. There were early reports that the film was going to address charges of xenophobia and racism leveled against the original, but there’s not too much evidence that the filmmakers were really troubling themselves with it.

It’s quite possible that nobody seeing this film will feel that anything has gone missing. The audience I saw it with at a sneak preview seemed to mildly enjoy it, though it’s impossible to know in such circumstances if it was really the movie winning them over or the fact that the tickets were free. Aside from a few jokey buddy-comedy exchanges between Aladdin and the Genie, most of the bits that seem to work best are imported from the original.

As is often the case with the recent Disney remakes, this one seems to adhere to the same misconception that affects the rest of the film industry, particularly where science fiction adventures, superhero narratives, and fairy tales are concerned: that if it’s animated, i.e. a “cartoon,” it’s somehow not a “real movie,” and thus not worthy of the automatic respect bestowed upon the most expensive and heavily promoted motion pictures, and not as validating to the people who’ve paid to see it. All of which is also strange, considering how CGI-dependent these sorts of movies are, even when they’re trying to make the mountains and buildings and tigers and parakeets made of ones and zeroes look as “real” as possible. “Aladdin” is no more realistic, ultimately, than “Star Wars -- Episode I: The Phantom Menace,” which came out 20 years earlier and has comparably sketchy computer imagery.

This, apparently, is where both audiences and the filmmakers who serve them want the movie industry to go. Toasters, as far as the eye can see. 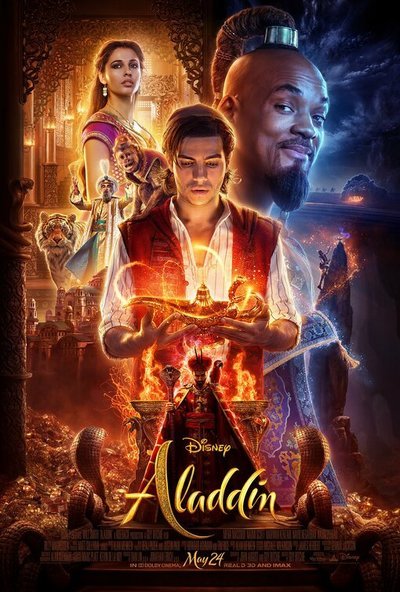 Rated PG for some action/peril.

Will Smith as Genie

Navid Negahban as The Sultan

Frank Welker as Abu (voice) / The Cave of Wonders (voice)