In Ofra Bloch’s “Afterward,” the director connects current and past traumas by reflecting on her childhood memories, her beloved uncle’s experience of the Holocaust, and how she learned to fear her Palestinian neighbors in Israel. Yet while Bloch's emotions and thoughts about the Holocaust and the Israeli occupation are deeply felt, the documentary’s finer points are a little less clear.

Armed with a background in psychology, Bloch talks through her observations with Germans, fellow Israelis, and Palestinians and asks about their experiences. She explores the dichotomies of victimhood and oppressor, the losses suffered on all sides, the pain that lingers for generations, and the stories we tell ourselves to justify misguided actions. Like conversational therapy, the transitions aren’t always clean. Stream-of-consciousness confessions may come out in starts and fits. The heady film always feels a little directionless, meandering between subjects’ testimonies like that of a reformed Neo-Nazi skinhead to the Jewish artist who was protested and persecuted for creating a Holocaust memorial.

Bloch uses her background as a personal entry into these topics, sometimes quite literally. She takes a Michael Moore-like approach to the documentary and is in almost every frame of the film either leading the camera to her next interview, sharing a heart-to-heart with her subjects or walking into a potentially tense altercation in the street. In one somewhat awkward moment, she inserts herself in a Palestinian protest against occupiers by asking if someone speaks English or Hebrew.

Bloch's intentions are good, but at times, they come across as too self-serving. The movie is about her as much as it is the theory she has observed examining her family’s history of trauma and looking at how today’s violence could mark future generations. Whenever she strays too far from the original topic, Bloch returns to the bittersweet motif of her childhood memory of walking with her uncle carrying ice home to his refrigerator, a scene which takes on heavier meaning the more times we see it and she reveals more about his backstory. It’s a subtle but effective emotional reminder of the loss that has been suffered and continues to be inflicted.

The film jumps back-and-forth between the present and the past; it’s up to the viewer to keep up or assume that time just has a bad habit of repeating its worst qualities. Some points are lost in-between some of the film’s more heated discussions, like the idea that part of the reason the Holocaust still haunts Germans today is that many from that generation have refused to acknowledge it or discuss it at all. As more generations have come up, there’s a mixed sense of shame, resentment, or inherited disillusionment. Bloch doesn’t stick to the topic long enough to prescribe a list of next steps like “we should talk about this more,” only musing on it before moving on to the next set of ideas.

Is it ever possible to heal from such an event or forgive the population that so comfortably ignored or endorsed your people’s persecution? The documentary doesn’t seem to have a clear answer because most of its interview subjects haven’t figured that out for themselves, either. In this sense, “Afterward” feels like the first in a series of therapy sessions, a good starting off point, but with many more hours of discussion still ahead. 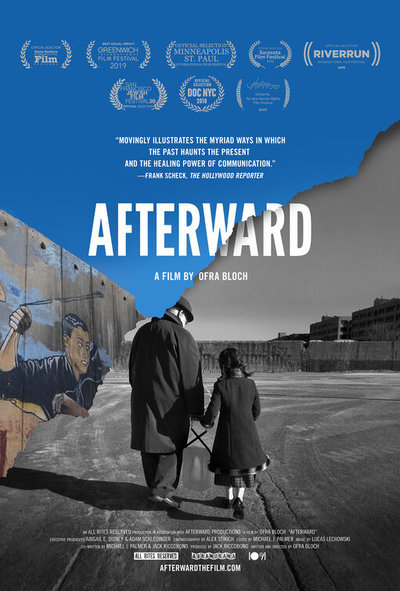 Ofra Bloch as Herself