“Afterimage,” the final film by Poland’s Andrzej Wajda, is a fitting coda to the career of one of world cinema’s giants. Unlike fellow Poles such as Roman Polanski and Jerzy Skolimowski, who decamped for the West’s freedoms not long after their careers launched, Wajda, who died at 90 following the film’s premiere at last fall’s Toronto International Film Festival, remained in Poland trying to examine that country’s modern history and mores. Prior to the collapse of Soviet Communism, his efforts often led to difficulties with Poland’s Communist regime, which in turn gave him a theme that recurs in “Afterimage”: the necessity for individuals and artists to resist the soul-crushing demands and cruelties of totalitarian governments.

Without question, the new film will mean most to viewers familiar with Wajda’s work. When he burst onto the scene in the 1950s, his great trilogy of “Generation,” “Kanal” and “Ashes and Diamonds” anticipated the stylistic energy and sophistication of the French New Wave while also registering the disillusionment and complex feelings of young Poles who had suffered the horrors of both Nazism and Communism. Though often constrained by the authorities in the following decade, he captured the anti-Communist ferment of the Solidarity era in “Man of Marble” (1979) and "Man of Iron" (1981), a struggle he retrospectively celebrated in “Walesa: Man of Hope” (2013).

Wajda’s father was a Polish cavalry officer who died in 1940’s Katyn Massacre, in which, at Stalin’s orders, Soviet secret police methodically put bullets through the heads of 22,000 men who represented the cream of Polish society. At the time the Nazis and Soviets were allies, but after the alliance broke apart and the Germans invaded, the Soviets blamed the crime on the Nazis, a denial that stood as official policy until 1990 and was widely parroted by Soviet apologists in the West. (Churchill and Roosevelt knew the truth but directed their governments to suppress it for the sake of good relations with Stalin.) Some of the documents concerning the massacre remain classified in Russia, so it’s no surprise that it took Wajda until 2007 to release the stark, uncompromising “Katyn,” which was nominated for an Oscar for Best Foreign Language Film.

Written by Andrzej Mularczyk, the author of the book on which “Katyn” was based, “Afterimage” might be considered a companion piece to the earlier work. Both films are grim, clear-eyed looks at the predations of Stalinism, though this time the setting is not war but peacetime. It’s 1948 when we meet Wladyslaw Strzeminki (the great Boguslaw Linda), an artist in his early 60s who’s missing an arm and a leg due to injuries suffered in World War I. Considered Poland’s most renowned painter, Strzeminski is also a noted theoretician and a beloved teacher at the Higher School of Visual Arts in Lodz.

His fame and popularity do not, however, protect him when the Stalinist thought police come calling. Wajda announces this in a witty, visually arresting scene early on. Strzeminski is in his apartment about to paint when his canvas, then the whole room, suddenly turns red. A giant banner celebrating Stalin has been hoisted in front of his window. He rips a hole in it to let in the daylight, committing an infraction that’s only the beginning of his troubles with authority.

A bigger problem is that he believes in two things that are anathema to the cultural powers-that-be: abstract art and the autonomy of the artist. The former is increasingly verboten as Soviet “socialist realism” becomes the only officially sanctioned style of painting and all forms of non-representational and avant-garde art are denounced as examples of Western decadence and American “cosmopolitanism” (a word that in Communist contexts usually has undertones of anti-Semitism, though Wajda doesn’t stress these). As for artistic autonomy, that’s also disallowed; artists are meant to serve not themselves but the masses, the collective, the Party—even if the resulting "art" is the sheerest propagandistic kitsch.

Strzeminski supposedly knew Chagall, Kandinsky and Malevich, but we never hear any mention of friends in the West who might help him escape Poland, as other artists did. Likewise he has a young daughter (the excellent Bronislawa Zamachowska) he cares for and a female student (Zofia Wichlacz) who cares very much for him, but neither relationship can put the skids on his rapid downward trajectory.

First, he is relieved from his teaching position. Then he sees the removal of his famous “Neo-Plastic Room” from the Lodz museum, and the utter destruction of a thesis art show by his students. Some of these bright-eyed young people would love to stand by him, defend him, but they are told that doing so would mean sacrificing their own futures.

When he is de-credentialed as an artist, it means he can no longer get work. In a bitter irony, he secretly gets a job painting giant Stalin posters, but when his status is discovered, he’s dismissed from that humiliating position too. Soon enough he finds out that not having credentials means he can’t even buy paints, or food. How will he live? He’s told that under Communism “those who don’t work don’t eat.”

“Afterimage” is mounted in a classical, beautifully understated style that throughout conveys the assurance of a true master. It’s one of those films that doesn’t ask to be liked or admired, but only to be heard. Like Darkness at Noon, Nineteen Eighty-Four and other anti-Communist literary classics, its descent into the hell of totalitarianism isn’t softened by a glimmer of solace at the end. It’s the testimony of an artist who has seen the worst of Polish history and demands that it not be forgotten. 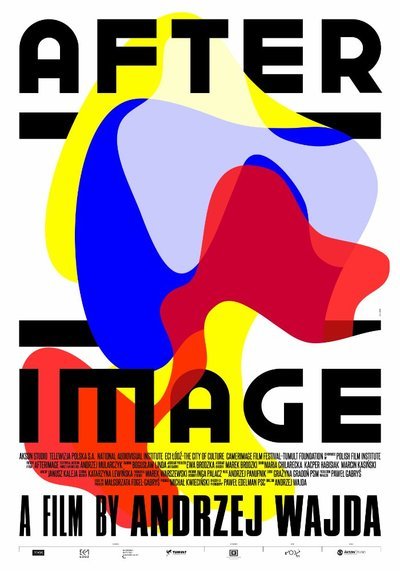