There are probably poetry majors who do just fine once they must face the everyday realities outside of their campus cocoon—that is, when they aren't busy dodging bill collectors coming after them for overdue student loan payments.

I am just guessing here, but unless you are a rapper, jingle writer or Maya Angelou, versifying isn't going to pay the rent.

That is the ticklish pickle that "Adult World"'s Amy (Emma Roberts, whose grating cutesy-klutziness makes her come off more like a neurotic middle-schooler than a recent college grad) finds herself in, once she steps forth from Syracuse University and finds that few potential employers are impressed by her ambitions as a bard. Her understanding parents want to support her artistic pursuits, but not when it comes to providing free room and board as well as funding the postage cost for all her rejected literary mag and writing contest submissions.

There is another conundrum to overcome in this coming-of-age comedy: Saddled with unjustified confidence and a total lack of actual life experience, this over-coddled wordsmith is better at self-delusion than she is at self-expression.

There is nothing to worry about, though. Adult World, as the store is both literally and metaphorically known, is less a den of iniquity than a source of colorful characters whose back stories would probably make for a more satisfying movie than Amy's.

Your mood may brighten when it is revealed that the proprietress of Adult World is Cloris Leachman, but it is destined to deflate when it becomes obvious that director Scott Coffey (Ellie Parker) and writer Andy Cochran have forgotten to give her anything interesting to do. Evan Peters (Roberts' "American Horror Story" co-star and real-life fiancé) adds some dark-horse depth to Alex, a fellow clerk who clearly would like to get to know Amy better for some reason. Then we get a throwback to the midnight cult movies of yore with cross-dressing customer Rubia (Armando Riesco, managing to sidestep the more treacherous clichés even in high heels), who deigns to take Amy under her wing while providing temporary shelter.

And thank goodness she does, because that allows John Cusack to enter the picture as a onetime enfant terrible of couplets who peaked at 18 and has grown into a bitter, sardonic scribe coasting on his early glory. What does Amy do when she encounters her hero for the first time? She knocks down those in line at the signing and later shrieks at her would-be mentor, "I just want to smash your head open and take everything in there."

Billings tries to run but he cannot hide since he lives and works in the area. He and Amy form a tentative relationship—she cleaning up his home and he muttering subtle insults under his breath while attempting to give this unfocused creature a clue about how to cultivate her seemingly meager talents. Or as he derisively notes, "You would be the type of muse I would get."

Cusack's distinctive handling of his sullen poet offers an opportunity for "Adult World" to make a statement about youthful ambition and middle-age disillusionment beyond Billings dubbing Amy and her peers as "Generation Mundane."

But the film just stops short of truly achieving that goal. Too bad, because for a few moments I saw glimmers akin to another, much better version of a young woman's stalker-ish attachment to an older man. Namely, 2001's wonderful "Ghost World", which itself borrowed heavily from the equally essential "The World of Henry Orient" from 1964. "Adult World", however, never quite fully delivers much more than yet another oh-poor-me take on post-collegiate struggles in the cold, cruel 21st Century. And that is a small world, indeed. 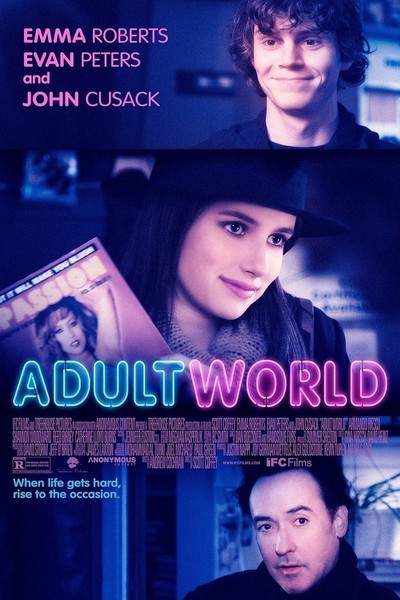