David O. Russell deserves to be counted among Hollywood’s finest living filmmakers, one who appeals to mainstream tastes without having to compromise his off-kilter depictions of humanity with all its flaws.

His record speaks for itself: Since 2010, he has released three films – “The Fighter,” “Silver Linings Playbook” and “American Hustle” – that together grossed $380 million and collected 25 Oscar nominations.

But back in 2008, Russell was caught in a professional snag. Shooting on a political satire then-titled “Nailed,” loosely based on a 2004 novel, “Sammy’s Hill,” written by Al Gore’s daughter Kristin, was halted four times as financing kept running out. He ultimately quit the unfinished project two years later, leaving its destiny in the hands of others, and took his name off the credits.

Redubbed “Accidental Love” and with the pseudonymous Stephen Greene listed as director, the misbegotten comedy that has been available on VOD since mid-February will finally open in limited release at theaters this weekend.

Given Russell’s involvement and a fairly solid cast that includes Jake Gyllenhaal and Catherine Keener, just how awful could it be? Really awful. Unwatchably awful. As in, “Give it the Razzie now and be done with it” awful.

From its intrusively generic soundtrack heavy on cheesy strings to the painfully frantic attempts at supposed funny business (consider that Paul Reubens aka Pee-Wee Herman provides probably the only well-modulated performance), “Accidental Love” could easily qualify for disaster relief.

The film is in trouble from the get-go with what appears to be a faux “Happy Days” episode as a roller-skating carhop Alice (Jessica Biel) serves patrons at a ‘50s-style drive-in eatery in small-town Indiana.

But instead of the Fonz, there is a porn-stached James Marsden as motorcycle cop Scott, who invites Alice to a fancy restaurant that night in order to propose to her.

But as fate – along with some odd plotting choices – would have it, a repairman holding a nail gun falls on Alice during their meal and shoots her in the head.

Just as a surgeon (Bill Hader, who skirts by in a cameo) is about to remove the foreign object, it is learned that Alice is uninsured and she has no way to pay the $150,000 bill. You would think that the restaurant would be held liable, but that notion is dismissed out of hand. Instead, she is released with the warning that her untreated injury could cause her to fly into irrational rages, speak foreign languages (in this case, Portugese) and experience uncontrollable sexual urges, all of which eventually have little to no payoff in the laugh department.

After a brief ill-advised stab at home surgery by a drunk veterinarian (take pity on Kirstie Alley), Alice decides to head off to Washington, D.C., to plead her case to her local congressman, Howard Birdwell (Gyllenhaal, whose bug-eyed efforts here make his sociopathic “Nightcrawler” creep seem like the essence of understatement). Just because you can never have too many snicker-inducing medical conditions, Alice is accompanied by two acquaintances: a reverend with a pharmaceutically-induced constant erection (Kurt Fuller) and a pal whose weight-lifting regimen has led to a collapsed anus (Tracy Morgan, all but undone by his character’s witless predicament).

At that point, “Accidental Love” turns into a toothless mockery of self-serving politicos that can hardly compete with the real-life partisan shenanigans that go on regularly on Capitol Hill. Even someone as consistently good as Keener collapses under the weight of a stiff bouffant wig and a staid Barbara Bush wardrobe as a House Whip who pushes the dopey idea of building a military base on the moon while recruiting Alice as a pawn to promote her pet project.

As Keener’s Speaker of the House rival, James Brolin (replacing James Caan, wise enough to drop out over creative differences) mainly exists to undergo a humiliating protracted death while choking on a Girl Scout cookie – or, rather, a Girl Squaw cookie as they are known in this alternate universe.

About the only scene that rises above the haphazard rest takes place in Howard’s office as he becomes the beneficiary of Alice’s sudden bouts of lust. As the song “At Last” plays in the background, the frisky pair’s arms and legs are seen flailing about as the camera circles around them. Too bad the mood is killed after that since Gyllenhaal (who hasn’t been in such an at-odds-with-itself curio since 2001’s “Bubble Boy”) and Biel (madcap is not her strong suit) have zero chemistry together otherwise.

In the Cold War era, these sort of ensemble farces that mined humor from world events were commonplace, including 1964’s “Dr. Strangelove” and 1966’s “The Russians Are Coming, the Russians Are Coming.” The difference is, they were made by filmmakers who knew what they were doing. Perhaps if Russell had stayed behind the wheel, “Accidental Love” wouldn’t have gone quite so far off course. You can spy why he might have been drawn to the story since his strong suits have included allowing a large cast to wildly bounce off one another (“Flirting With Disaster”) and mining humor from topical subjects (“Three Kings”).

But years later, the arrival of Obamacare has made the film’s central conceit of health insurance reform pretty much obsolete. Not only that, such inside-the-Beltway series as HBO’s “Veep” and Netflix’s “House of Cards” – not to mention “The Daily Show” – already have done a pretty good job of scorching the integrity of our elected officials.

Just when you think that the agony of “Accidental Love” is about to conclude, there is the ever-popular group dance number followed by a blooper reel. When a movie is basically one giant blooper reel, that seems terribly redundant. 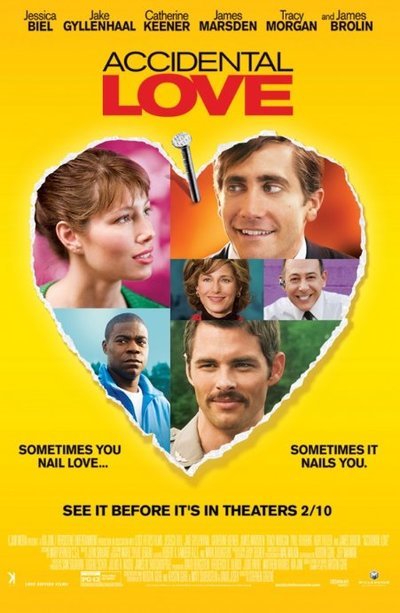