Losey establishes the mood by a series of low-key performances and a very quiet camera style. His camera tends to linger on scenes after the characters have left, suggesting that their intrigues run counter to the passive nature of their world. The subtle, controlled performances of the principal actors make this work.

The story involves two Oxford professors, an extrovert separated from his wife (Stanley Baker) and a quiet, repressed married man (Dirk Bogarde) whose wife is pregnant again. Both men are attracted to a young Austrian student (Jacqueline Sassard). She is engaged to Bogarde's student (Michael York). Bogarde would like to approach her, but holds back (as he tells himself) in deference to York. Baker lacks such qualms, seduces the girl, and even takes her to Bogarde's home one evening for a rendezvous.

This is the outline of the story; its fascination comes from Bogarde's perfectly calculated moves to seduce the girl himself and, incidentally, win his undeclared war with Baker. His victory comes only after the "accident" of the title.

The film is put together as carefully as a Hitchcock. The plot depends on coincidences, timing and the resources available in the limited Oxford world. But it is also recognizably a work of Pinter in the way the story is revealed backwards, in scenes that are jigsawed together to make an emotional continuity instead of a straightforward story line. 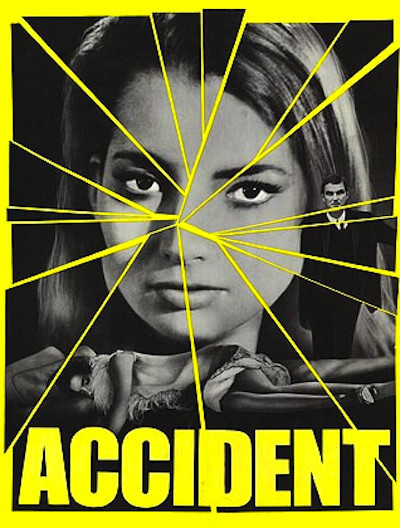