For a movie about two people who loved each other so deeply, they risked losing everything to be together—their families, homes, even their countries—“A United Kingdom” plays it frustratingly safe.

Based on the true story of the former king of Botswana and the British woman whose marriage in the late 1940s caused an international uproar, “A United Kingdom” is restrained to a fault. Director Amma Asante hits all the notes you’d expect in tastefully artful fashion. She has gifted, gorgeous actors in stars David Oyelowo and Rosamund Pike. And she has an undeniably inspiring story to tell.

“A United Kingdom” is well made and well-intentioned. But Asante is also saddled with a script from Guy Hibbert that spells out everything for the audience and oversimplifies its theoretically complex characters. Oyelowo’s Seretse Khama was exiled from his homeland—then known as Bechuanaland, a British protectorate—for long stretches of time for following his heart. He also angered and alienated his uncle (Vusi Kunene), who raised him as his own son, for bringing home a white woman to serve as their people’s queen.

Similarly, Pike’s Ruth Williams became a pariah herself, drawing the ire of her closed-minded father (Nicholas Lyndhurst) for marrying a black man. At the same time, the poor citizens of Bechuanaland didn’t exactly welcome this elegant foreigner with open arms. And since the British government wouldn’t allow Khama to return home because of the burgeoning, beastly apartheid in neighboring South Africa, Ruth was forced to spend her pregnancy alone. She gave birth to the couple’s first child, a daughter, without him at a rural hospital.

It’s all dramatic stuff, full of rich and complicated emotions. But as they’re depicted here, Khama and Ruth are singularly virtuous. Sure, they shed a few tears. Khama shoves a bunch of papers off a desk in a brief moment of rage. But individually, they both have a knack for saying the most poignant, uplifting thing at just the right moment. And while Oyelowo and Pike share a nice chemistry, especially during the couple’s courtship, it’s never one that indicates the sort of deep passion that must have driven these figures’ real-life sacrifice.

Their early days together provide a warm spark at the start, though, and they’re among the film’s finest. Khama and Ruth meet at a dance in 1947 London; he’s a thoughtful law student, she’s a vivacious clerk. The energetic pacing of this section, as they share a love of dancing and jazz albums, provides a great sense of the giddiness they felt in discovering each other.

But duty calls in the form of a letter from Khama’s uncle, informing him that his studies abroad have prepared him well and it’s now time for him to come home and lead his people. Only he doesn’t want to do it alone: He brings Ruth with him as his bride, an intimate decision with worldwide repercussions that neither of them could have predicted. (Asante, working with cinematographer Sam McCurdy, provides a striking and sumptuous contrast between the foggy chill of England and the sunny sprawl of Africa.)

Ironically, though, as the stakes get higher, “A United Kingdom” becomes less engaging. And a lot of that has to do with the fact that the British government officials wielding their power to keep the Khamas apart are depicted in such a one-dimensionally villainous manner. One of them is played by Tom Felton—Draco Malfoy himself—who was afforded more character development throughout the “Harry Potter” series.

The battle between good and evil is so obvious, it’s almost boring. These guys mercifully refrain from twirling their mustaches, but they do sip sherry as a comical reflection of their condescension and cruel authority.

Oyelowo can deliver a speech with a potent mix of fire and earnestness, though, as we also saw in his magnificent work in “Selma.” Pike shows once again that she’s capable of both vulnerability and fierce feminine strength. And in “A United Kingdom,” we get just enough glimmers of these actors’ prowess to wish we were watching them in a better movie. 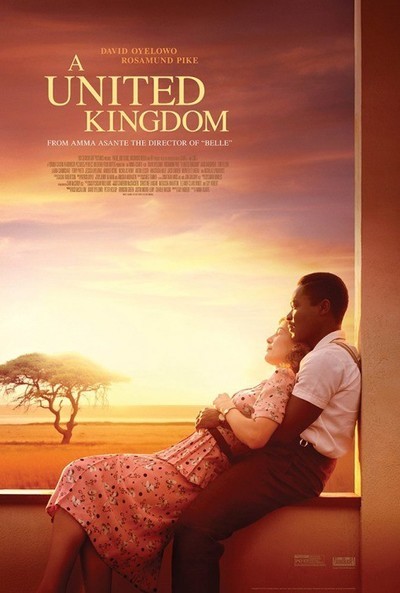 Rated PG-13 for some language including racial epithets and a scene of sensuality.