"A Master Builder" is the last cinematic collaboration from theater veterans Andre Gregory and Wallace Shawn. While that may not seem like a big deal to most people, there are some movie lovers out there who will respond to that news with the kind of giddiness that a fanboy might feel toward a new "Star Wars" movie. After all, their first project was "My Dinner with Andre," the 1981 film collaboration with filmmaker Louis Malle chronicling a long dinner conversation between the two that became a surprise art-house hit, helped to jump-start the then-embryonic American independent film movement and inspired one of the funniest throwaway jokes on "The Simpsons" and one of the most inspired episodes of "Community." In 1994, they followed that up by reuniting with Malle for what would prove to be the director's final film, the equally astounding "Vanya on 42nd Street," a powerful screen version of an adaptation of Chekov's "Uncle Vanya" that they had been rehearsing in a run-down church with a group of actors for years.

For their latest project, Gregory and Shawn have chosen to to take another play that they have been working on for over 14 years—a production of Henrik Ibsen's "The Master Builder" adapted by Shawn and staged by Gregory—and bring it to the screen. This may not sound like the most potentially cinematic of concepts but if anyone could possibly pull it off, it is these guys. However, the third time is not quite the charm as this effort never quite manages to pull off the trick of presenting such difficult material in the exciting manner of their previous efforts and it is only through the considerable efforts of the lead actors that it ultimately becomes something worth watching.

Shawn stars as Halvard Solness, a famed architect who, despite his advancing years and growing lack of interest in pursuing his craft, is nevertheless unwilling to cede control of any aspect of his professional or personal lives. Having successfully usurped his mentor, Brovik (Gregory), during the early part of his career, Solness is wary of having the same thing happen to him, and, despite recognizing the talent of his assistant, Ragnar (Jeff Biegl), who is Brovik's son, he refuses to let the younger man strike out on his own and has even gone so far to employ the younger man's fiancee, Kaya (Emily McDonnell), as his bookkeeper and mistress as a way of keeping him close by. At home, he is equally cruel to his wife, Aline (Julie Hagerty), who has been in a state of mourning since the loss of their twin sons years ago when they were mere infants.

Things begin to abruptly change with the arrival of Hilde (Lisa Joyce), a mysterious young woman of about 22 who is the daughter of an old acquaintance and who needs a place to stay for the evening. It is soon revealed that she and Solness met a decade earlier when he designed a great tower in her town and where he may have acted improperly towards the then 12-year-old girl at a party at her house. At the very least, he made a promise that he would return for her in 10 years to claim her as his princess. Now the 10 years are up but has she really turned up in response to an off-hand promise that Solness doesn't even remember making or is there something more sinister behind her sudden appearance?

With its emphasis on psychological underpinnings and overt symbolism over narrative, "The Master Builder" is no walk in the park and it is to the credit of Shawn and Gregory that they have managed to remain relatively true to the source material. Unfortunately, what works on the stage does not necessarily translate on the screen and there are a few too many scenes featuring characters talking in oblique circles too long for their own good. The one major addition that Shawn has made is to now start the story with Solness on his deathbed until the arrival of Hilde instantly rejuvenates him—a move that not only adds virtually nothing to the proceedings but winds up doing no small amount of damage to Ibsen's carefully cultivated sense of dramatic ambiguity. As for the dialogue, it has an oddly stilted quality to it that suggests that it went through an Internet translator one time too many for its own good and since it has been reported that Shawn doesn't actually know any Norwegian, that may have been the case.

"A Master Builder" was directed by Jonathan Demme and while he has made any number of wonderful films in the past—"Citizen's Band," "Melvin and Howard," "Something Wild," "Silence of the Lambs" and "Rachel Getting Married"—his preference for freewheeling narratives that take audiences on unexpected journeys makes him an odd choice to direct a project of this sort. Although he employs a couple of different cinematic styles here—the opening deathbed scenes have the harsh visual style of one of the old Dogme films while the later one have a softer and more conventional look—he never quite manages to bring the material to life as a film in the way that Malle did so wonderfully in "My Dinner with Andre" and "Vanya on 42nd Street." As a simple recording of a theatrical presentation, which is pretty much what it is, it doesn't quite work either as Demme is unable to bring the filmed record to life as he has done in such spellbinding performance films as "Stop Making Sense, "Swimming to Cambodia" and his trio of concert films featuring Neil Young.

And yet, while "A Master Builder" never really catches fire as a film, it is still more or less worth watching, especially for those with no desire to watch ninja turtles, monster storms or dance-offs, thanks to the two lead performances. To put it charitably, Wallace Shawn is perhaps the furthest thing imaginable from Ibsen's original conception of Solness—I picture the "Atlantic City"-era Burt Lancaster—but he is so commanding in the part that by the time the film ends, it is almost impossible to imagine anyone else in the role.

He is playing one of the most malignant monsters imaginable—and this is before we learn the full extent of his depravity—but not only does he manage to make him eminently compelling and watchable throughout, he even manages to find a way to evoke a certain amount of empathy for him despite his cruelties. As Hilde, relative newcomer Lisa Joyce more than holds her own against Shawn with a raw and powerful performance that fully and fascinatingly embraces Hilde's complex nature. Their scenes together have such raw power to them that they give "A Master Builder" the dramatic and emotionally jump-start that it too often needs. 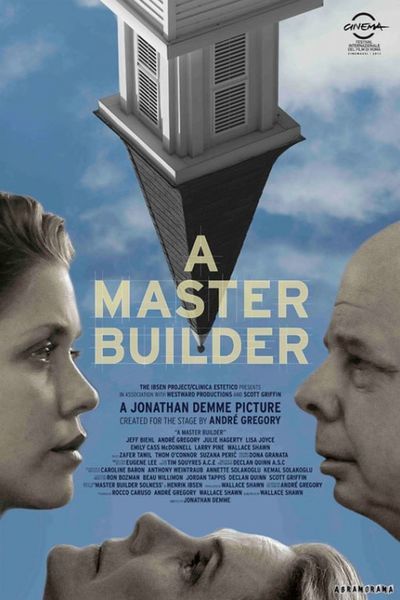