The eponymous protagonist of Mohammad Rasoulof’s “A Man of Integrity” is a handsome 35-year-old farmer in northern Iran who gazes at the world with a glare that could cut through steel. From the film’s first scenes onward, it’s clear that Reza (Reza Aklaghirad) has plenty of reasons for his enraged visage. Having left Tehran years before after getting in trouble at university, he entered what must have seemed like a life of peaceful isolation raising goldfish on a farm with his wife and young son. But it turns out that his rural community is rife with corruption at every level, leaving him facing battles wherever he turns.

A political film seething with white-hot anger, “A Man of Integrity” has a premise that might work dramatically in numerous other contexts. You can imagine it in a classic Western, with a young soil-tiller (played by Jimmy Stewart, no doubt) facing off against ruthless cattle barons and their bought-and-paid-for constabulary. Or informing a Dashiell Hammett novel about a Depression-era union organizer battling the company goons and hired politicians of a powerful mining magnate. More recently, and from an international perspective, the premise has obviously similarities to that of Andrey Zvyagintsev’s “Leviathan” (2014), a scathing, allegorical indictment of Vladimir Putin’s Russia.

Like its Russian counterpart, the Iranian film puts its maker at odds with an authoritarian regime that doesn’t take kindly to critiques of its power. But the official opposition Rasoulof has faced in recent years, and continues to face, only underscores the daring and importance of his work, as it does that of his somewhat better-known compatriot Jafar Panahi. Involved in the protests against the so-called “stolen” presidential election that returned to Mahmoud Ahmadinejad to power in 2009, Panahi and Rasoulof were arrested, imprisoned, put on trial, and given draconian sentences that included not making films for extended periods of time. Yet, in a way that illustrates the paradoxes and absurdities of life in artistic Iran, the filmmakers have simply gone on practicing their craft, making films without official sanction that invariably are banned in Iran but smuggled out to appreciative audiences at international festivals and arthouses.

While Panahi’s four features since 2010, which star the director himself, are often comic in tone, Rasoulof’s four—“A Man of Integrity” (2017) is the third, though its U.S. release follows that of “There Is No Evil” (2020)—are deadly serious dramas that target particularly troubling aspects of Iranian society. One remarkable quality they share is that, for films regarded as “underground” due to the low-budget, off-the-grid way they are made, they come across as polished, often quite expansive productions. “A Man of Integrity” certainly fits this description. Though evidently filmed far from the eyes of Tehran’s cinema police, in the part of northern Iran where the story is set, it contains a large cast of characters and ranges across a wide array of rural and urban settings, which are handsomely rendered thanks to Ashkan Ashkani’s cinematography and Saeed Asadi’s production and costume design.

Rasoulof’s story proceeds with the deliberate pace and simmering tension of a ‘70s political thriller. Intelligent and determined, Reza faces problems from the outset. With the bank demanding repayment for a loan that has kept his farm afloat, he sells his wife’s car but still can’t fend off the financial squeeze. Meanwhile, spotting a few dead goldfish in the large ponds that face his house, he determines that a threatening neighbor has interfered with his water supply. When Reza goes after the man, he eventually learns that his adversary is part of a private outfit called the Company that has its tentacles throughout the local government and is methodically moving to take control of the land and rights of small-fry farmers like Reza.

Everywhere Reza turns, he’s given the same advice: bribe someone. Many of the people offering this counsel are friends, or think they’re doing him a favor, and Reza’s stubborn resistance to the common wisdom increasingly isolates him from the community. In the tale’s second half, the external pressure even impacts his family. The principal at a local high school, his wife Hadis (Soudabeh Beizaee) tries to help by sending an implicit threat to Reza’s adversary via one of her students, but the plan backfires. And the couple’s son gets into a fight that leaves some wondering if the father’s combative temperament is being passed on to his male progeny—a theme in Iran’s ancient literature that has many echoes in its modern cinema.

While most of the story depicts Reza’s interactions with his family (including a visit to a sister in Tehran), his neighbors, opponents, and other members of his community, Rasoulof also shows him in a number of private moments, including making and consuming watermelon moonshine and languishing in an underground swimming pool. Rather than revealing his thoughts, these passages suggest how much he wants to escape into dreams and cleanse himself of the societal rot that surrounds him.

Though full of dramatic and thematic fascinations, “A Man of Integrity” is not without its flaws. Some important actions happen off-screen, obliging viewers to puzzle out things that could have been more clearly presented. Also, especially for non-Iranian viewers, the large number of characters and the complexity of their relationships can sometimes be hard to parse.

Nevertheless, the film’s importance is indicated by the official outrage it provoked. In 2019, Iran’s Islamic Revolutionary Court sentenced Rasoulof to one year in prison and a two-year ban on leaving the country due to “A Man of Integrity.” At last report, he had not turned himself in, but his troubles likely foreshadow others for Iranian filmmakers. That community often sees its fortunes dependent on shifts in government, and the relatively liberal regime of President Rouhani ended last year with the election of hardliner Ebrahim Raisi. A couple of weeks ago, Raisi’s government shut down the annual Fajr International Film Festival (a companion to the national Fajr Film Festival), once a welcoming beacon to the global film community. The move hardly bodes well for Mohammad Rasoulof and the Iranian cinema’s other men (and women) of integrity. 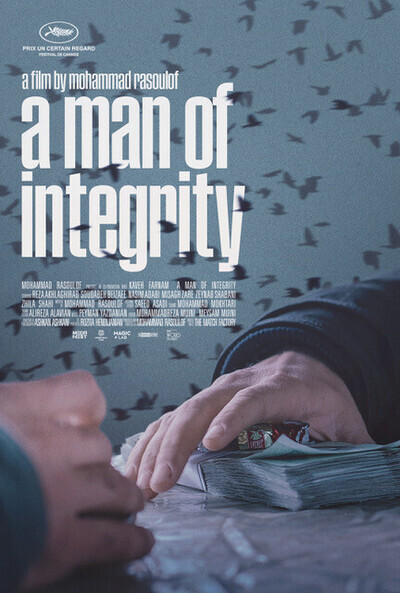