“A Man Called Ove” tells the familiar story of the curmudgeonly old man whose grumpy life is brightened by forces beyond his control. These forces take the guise of a much younger person who provides a sense of purpose for the old hero. A film like this rises or falls not only with its central performance, but also with its ability to engage the viewer’s emotions in a credible, honest fashion. Movies like this tend to get dismissed as “manipulative” because audience sympathy for the protagonist is at least partially elicited by flashbacks to a litany of tragic or unfair past events. But all movies are manipulative by default; the effectiveness of that manipulation is the more valid measurement to inspect. On that scale, “A Man Called Ove” is a morbidly funny and moving success.

Adapting Frederick Backman’s Swedish best seller, writer/director Hannes Holm doesn’t veer too far from the storytelling structure we’ve come to expect. Instead, he tweaks expectations with the way he presents the material, and his grip on the film’s tricky, tragicomic tone is masterful. For example, several flashbacks are cleverly presented as the “life flashing before one’s eyes” moments triggered by the suicide attempts of Ove (Rolf Lassgård). Ove is a widower whose daily visits to his recently deceased wife’s gravesite end with his verbal promise to join her in the afterlife. His failures of self-annihilation are due more to bad timing than botched attempts—he is constantly interrupted by neighbors or some distracting event going on in his housing complex. Priding himself on his reliability, Ove feels compelled to stop killing himself to address each interruption.

Keep in mind that the black humor in this situation doesn’t arise from any mockery of Ove’s pain over missing his spouse. That is presented as real, understandable pain. Instead, the humor comes from Ove’s stubbornness as a creature of habit. Perpetually enforcing neighborhood rules nobody cares about nor adheres to, Ove can’t resist the opportunity to scold those who violate them. Yet, for all his crabbiness, there’s a level of selflessness inherent in Ove’s character, a trait he finds infuriating yet he begrudgingly accepts. His wife, Sonja, played as a young woman in the flashbacks by Ida Engvoll, sees this in the younger version of Ove (Filip Berg), and the much older Ove acknowledges it after much bitching and griping. It’s almost as if Sonja is sending him interruptions from beyond the grave just so he can have an excuse to complain to her like he’s done every day since her passing. This compulsive adherence to routine will keep Ove distracted.

Also distracting Ove is the new, young family who moves next door to him. They start off on the wrong foot by crushing his mailbox while ignoring his sign about not driving in the area, and the noise from their young kids is a major annoyance to the childless Ove. Though the husband is originally from the area, his pregnant wife Parvaneh (Bahar Pars) is of Iranian descent and new to the country. It is she who constantly irritates Ove while simultaneously endearing herself and her family to him. Many of his suicide attempts are interrupted by her, and their eventual father-daughter style bond is often predicated on Ove’s opinion that his help is required because he thinks her husband is an idiot.

“You survived struggle in Iran, moving here and learning a new language, and being married to that idiot,” Ove tells her after taking up the task of her driving instructor, “driving a car should be no problem!” Of course, she can’t drive it wherever Ove has those “no driving” signs everybody else ignores.

Admittedly, “A Man Called Ove” throws everything but the kitchen sink at poor Ove. There’s a shocking death early on that haunts him (and us), and he is the recipient of several slights by higher ups at work and in the government. The marriage between the shy Ove and the jovial Sonja is full of love but fraught with personal tragedies. There’s an almost Job-like mercilessness to some of the fates that befall him, yet the film never dwells on them. Instead, they’re presented rather stoically and serve as a means for us to understand why Ove is who he is. This is a movie that softens its hero by giving him a cat, which sounds syrupy until you see how jacked up and scraggly this cat is. “He likes to shit in private,” says Ove to Parvaneh. “Please give him that courtesy.”

One gets the sense that the novel (and the award-winning film version) is so beloved because Ove represents a Scandinavian everyman who saunters on no matter what life throws at him. His admirable resilience toughens like leather, and his love of Saab and hatred of Volvo plays like a beautiful in-joke aimed straight at the hearts of his compatriots. That rivalry even costs him a friendship, though that same friend’s subplot also presents Ove angrily battling the unfeeling agents of bureaucracy that caused him such agony as a young man. Holm pulls everything together in a well-crafted, satisfying package that is nicely balanced between comedy and pathos.

As Ove, Lassgård gives one of the year’s best performances. He’s well supported by the other actors (and the aforementioned cat), but this is a rich, complex performance that is both funny and moving. It would have been easy to just let Ove coast by on his amusing grouchiness, but Lassgård lets us see so deeply under that protective exterior. We feel as if we’ve walked a mile in Ove’s shoes and absorbed his catharsis as our own. 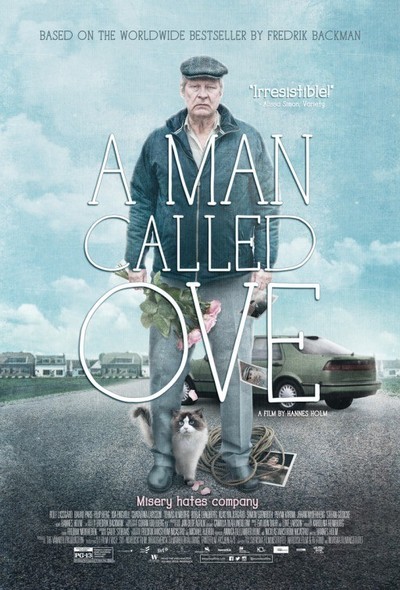 Rated PG-13 for thematic content, some disturbing images, and language.