“A Little Princess" is another magical family film based on a book by Frances Hodgson Burnett, whose work also inspired "The Secret Garden." Both films approach the characters of her children with calm solemnity and delight, placing them in vast, wonderful, frightening houses, and allowing them to discover some of the lessons of life there. Unlike the insipid devices of most family films, Burnett's plots understand that children take stories very seriously indeed, and that all stories are really about the uncertain place of the child in the mysterious world of adults.

"A Little Princess," which opens just before World War I, tells the story of Sara Crewe (Liesel Matthews), who until the age of 10 or 11 is raised by her father in India. Then her father finds it his duty to go off and fight in the war, and he places Sara in a magnificent private school in New York, run by a forbidding headmistress named Miss Minchin (Eleanor Bron), who is impressed by Capt. Crewe's wealth and assigns little Sara to a suite so luxurious, it could have been decorated by Cecil Beaton.

Miss Minchin's school, like most of the places in the movie, is obviously a set, and no less fascinating for that. It crouches at the end of a street like the palace of a Victorian robber baron, and inside, the glistening hardwood floors reflect the light of high stained-glass windows. But all is not an idyll here; in her first moments at the school, Sara notices Becky (Vanessa Lee Chester), a black girl in a simple dress, mopping the floor.

Sara soon becomes the most popular girl in school because of her ability to spin fantasies out of mundane materials. Give her a boring child's book to read aloud, and in her hands it will become a legend from India. Most of the girls quickly idolize her, and one who doesn't, a spiteful little snob with long hair, is warned by Sara, in what sounds like a display of supernatural prescience, "I wouldn't brush my hair as much if I were you." Then one day, Sara's birthday party is interrupted with an ominous command: "Go to your room and get a simple black dress." There has been a major reversal in her life, and soon she's sharing attic quarters with Becky. What happens then depends on large servings of coincidence, fate, melodrama and adventure, and is thoroughly satisfactory in all of those departments. Miss Minchin reveals herself as a cold snob, and Bron's performance is all the more effective because it is cool and contained, instead of going over the top into cartoon exaggeration. "If you fail to meet the standards of this institution," she informs Sara at one low point, "you will be expelled. The streets of this city are not kind to homeless orphans." "A Little Princess" was directed by the Mexican born Alfonso Cuaron, and produced by Mark Johnson, the producer on such films as "Good Morning, Vietnam" and "Avalon." I mention both, because it is well-directed and produced: Cuaron's version of magic realism consists of seeing incredibly fanciful sets and situations in precise detail, and Johnson has provided him with the freedom and logistical support to create such places as the street where Miss Minchin's school looms so impressively.

Imagination is a precious gift, and too many films hammer it down into submissiveness. Children sit transfixed before films and TV shows that substitute action for fancy; cartoon characters fly through space and blast one another endlessly, providing kids with the impression of a story without the substance.

Movies like "A Little Princess" and "The Secret Garden" (now on video) contain a sense of wonder, and a message: The world is a vast and challenging place, through which a child can find its way with pluck and intelligence. It is about a girl who finds it more useful to speak French than to fire a ray gun. I know there are more kids this season who want to see "Judge Dredd," "Die Hard With a Vengeance" and the new Batman movie than kids who want to see "A Little Princess," and I feel sorry for them. 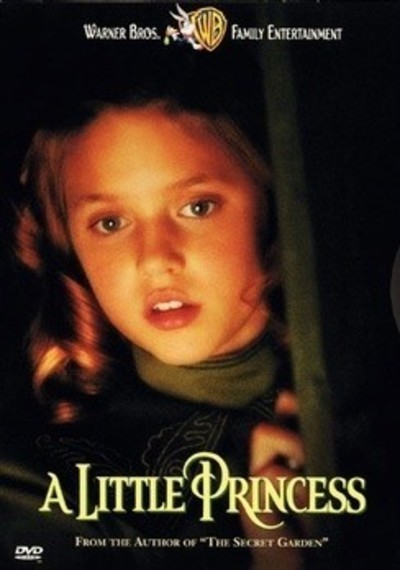