Whenever I watch found footage horror movies, I hope for a scene where the ghost/creature/whatever suddenly grabs the camera and starts shooting its own footage. Because if you’re stupid enough to continue recording when crap hits the fan, you deserve to die horribly and with better cinematography. The ghost will give me a better, less shaky look at the terrible things it’s doing to the deserving victim. Since it knows exactly what’s about to go down, it will choose better angles and shots.

To recap the first film: Strange, paranormal events befall Malcolm (Marlon Wayans) when he moves in with his girlfriend Kisha (Essence Atkins). These events look suspiciously like "Paranormal Activity," one of the many films this series attempts to parody. Malcolm hires a psychic who is more interested in trying to have sex with him than figuring out what is causing appliances to move by themselves.

In a plot twist I wish "Sex and the City" had used, Malcolm discovers that Kisha sold her soul to the Devil for a pair of expensive shoes. Mucho mayhem ensues, most of it manifested as reprehensibly unfunny homophobia. In a scene one can never unsee, Malcolm is raped by the evil spirit haunting his house, a rape he uploads to YouTube by accident. This is supposed to be funny. A lot of people apparently thought so, otherwise we wouldn’t have this sequel.

"A Haunted House 2" opens with the still possessed Kisha being disposed of by Malcolm and his unbearably annoying cousin Ray-Ray (Affion Crockett). But Kisha’s not gonna be ignored, so her spirit possesses Malcolm’s new abode. This affects not only Kisha’s ex but his new squeeze Megan (Jamie Pressly), her sullen, teenage daughter, Becky (Ashley Rickards), and her son Wyatt (Steele Stebbins).

This time, the main target of parody is "Sinister," though jabs at "Insidious" are also present. The botched re-enactments of the former’s murderous 8mm home movies aren’t funny, but they’re at least well done. The "Insidious" scenes are so bad you feel sorry for the actors in them, especially Cedric the Entertainer, who reprises his role as Father Williams.

"A Haunted House 2" tones down the gay jokes but ups the streak of animal cruelty. Taking a page from "The Hangover Part III," co-screenwriter Wayans tries to wring comic mileage out of the graphic destruction of live animal tissue. The rooster fight shown in the commercials is lifted directly from "Hangover III," though this time there’s only one angry bird. What happens to it confirms my unnatural fear of ceiling fans. The rooster’s facial reaction to Wayans’ attempt to destroy it (which you can also see in the commercials) is the only laugh to be had in "A Haunted House 2."

If you are a dog person, DO NOT SEE THIS FILM. (In fact, don’t read this paragraph.) A canine is squashed flatter than a pancake by a safe, which admittedly is done in exaggerated comic fashion, but another is beaten, shot repeatedly and chainsawed. The resulting carnage is lovingly depicted, and if that weren’t enough, the poor creature’s head is then blown off by a shotgun in front of Megan’s kids. Now, I’m no prude. Some of the stuff I’ve found funny would curl your hair and probably make you pray for me. But my only reaction to scenes like this is disgust.

Besides Cedric the Entertainer, who is a very funny stand-up comedian who can act (see "Barbershop"), "A Haunted House 2" also wastes the talents of veteran Kym Whitley and Gabriel Iglesias. Hell, it wastes the talents of all involved, because this isn’t even a movie. It’s edited like a series of end-credit outtakes and doesn’t even try to be coherent. It flashes its cynical, cash-grabbing intentions like a bright neon diner sign on a New Jersey state road. The low cost ensures that it will make money even if just the Wayans go see it.

Speaking of the Wayans, Marlon Wayans is a talented man. Don’t mock that sentence—it is true. He’s worked with Darren Aronofsky ("Requiem for a Dream") and the Coens ("The Ladykilers"). He co-wrote the similar, though far funnier "Scary Movie." And whenever he speaks of his long-gestating Richard Pryor biopic, tingles go up my spine. I want to see that movie. Why is he wasting his time on this excrement? Why did I need to see scene after unfunny scene of Wayans nakedly humping a creepy children’s doll (there must be 10 minutes of this footage)? Who gives a damn what movie it’s supposed to be parodying? He could be playing Richard Pryor instead of doing this. 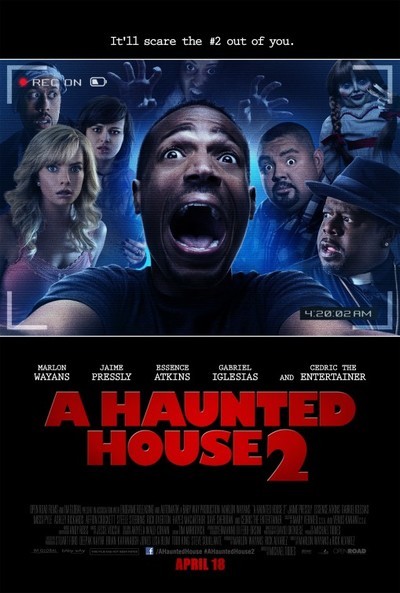 Rated R for crude and sexual content, nudity, pervasive language, drug use and some violent images