“The Hangover Part III” has a high body count for a "comedy", and not all the victims are human. Among the dead, I counted four people, two dogs, a giraffe and a flock of crazed, cannibalistic, cocaine-addicted cocks. Detailing the human casualties may count as a spoiler, so I’ll focus on the critters: The roosters are blown away, tossed out of windows, and smothered with a pillow. The dogs are poisoned with Demerol. Because you’ve seen the trailers and the commercials, you already know what happens to the poor giraffe owned by Alan (Zach Galifianakis), one of the franchise's recurring characters. What you may not know is that none of this violence is funny, not even when Mr. Chow (Ken Jeong) comments on the animal cruelty by asking Stu (Ed Helms), “What? You’re PETA now?”

“The Hangover Part III” is the second unnecessary sequel to 2009's "The Hangover."  It was preceded by the reprehensible “The Hangover Part II,” which catered to its scared, straight white male audience’s baser instincts and made even more money than the original. This one opens with two holes, one in a prison wall and the other in the windshield of a moving car. The first hole is made by Leslie Chow, who must have seen “The Shawshank Redemption.” The second is made by the giraffe, causing a massive freeway accident. Both affect the Wolfpack, the group consisting of Alan, Stu, Alan’s brother-in-law, Doug (Justin Bartha) and group leader Phil (Bradley Cooper). After Alan’s highway mishap inadvertently kills someone, his mother and sister stage an intervention to get him sent away for psychiatric treatment. His Wolfpack buddies offer to drive him there. En route, they run afoul of Marshall (John Goodman), an incredibly pissed off thief looking for Chow. Marshall wants the $23 million in gold bricks Chow stole from him, and has reason to believe the escaped Chow will connect with his prison pen pal, Alan. Marshall sends three of the Wolfpack members to find Chow, keeping Doug as collateral.

The Wolfpack take a detour to Tijuana looking for Chow, but “The Hangover Part III” eventually returns them to the scene of their crimes in the original film: Las Vegas. During the journey, director Todd Phillips and company acknowledge the previous installments with cameos, lines of dialogue and visual cues. I found these to be hollow attempts at catering to hardcore fans of the series, but your mileage may vary. Heather Graham, Mike Epps and the smoking monkey (the best thing about “Hangover 2”) return briefly. Only the monkey emerges unscathed, and she doesn’t even get a loosey to smoke.

The main focus this time is on Alan and Chow, two characters who are better in small doses. Chow is a violent, drug-fueled madman who veers dangerously close to Asian coonery. Alan is a selfish prick whose charm passed its expiration date two movies ago. Both cause death and destruction wherever they go, but while the Wolfpack’s interaction with Chow is always under duress, there is no reason for them to continue associating with Alan. When Stu tells the group “We’re stuck with [Alan]. We’re gonna spend the rest of our lives with him because we’re all he has now,” it isn’t a poignant declaration of love for a friend. It’s a death sentence. The press materials claim that “Hangover” fans would love to have Alan as a friend, which is either a testament to the success of Galifianakis’s brand of comedy or some warped form of fanboy Stockholm Syndrome.

“The Hangover Part III” plays more like a caper film — “Alan’s Eleven,” perhaps — than a comedy. While Phillips ably handles the action sequences, he and co-screenwriter Craig Mazin can’t juggle both genres in the screenplay. While a scene atop Caesars Palace generates some suspense (and a rare moment of sympathy for Alan), I had to wait until halfway through the closing credits for my first, and only, laugh. I wouldn’t dream of spoiling it for you, except to say it involves the character I enjoyed most in the first “Hangover,” the high-strung, constantly violated Stu.

John Goodman is squandered in his few scenes as Marshall. The trailers led me to believe this was some kind of riff on Walter from “The Big Lebowski,” but Goodman plays the character completely straight. When the Wolfpack interacts with him, it’s as if they’re placing a call to a different movie. It’s not Goodman’s fault; Marshall needed more of a Christopher Walken–style quirkiness to fit into the "Hangover" universe. On the opposite side of the spectrum is Jeong’s Chow, who is so over-the-top he loses all menace. Jeong can be very funny (he’s the best part of “Role Models,” for example) but, like Galifianakis, he’s repeatedly typecast.

The other actors don’t fare much better. Cooper looks bored, as if he’d rather be trying to earn more Oscar nominations. Helms gets the film’s biggest laugh, but it has more to do with a sight gag than his acting. Melissa McCarthy's cameo aims to soften Alan’s grating personality, but you’ve seen most of her performance in the trailer; her appearance made me long for a better comedy, perhaps starring her and John Goodman as criminals on the lam.

Phillips says this is the final installment in the franchise, but I don’t believe him; if audiences make this one a huge hit, there will be “The Hangover Part IV.” It may simply consist of the Warner Bros. logo and 90 minutes of blank screen, but it’ll get made. And it’ll gross $100 million opening weekend. 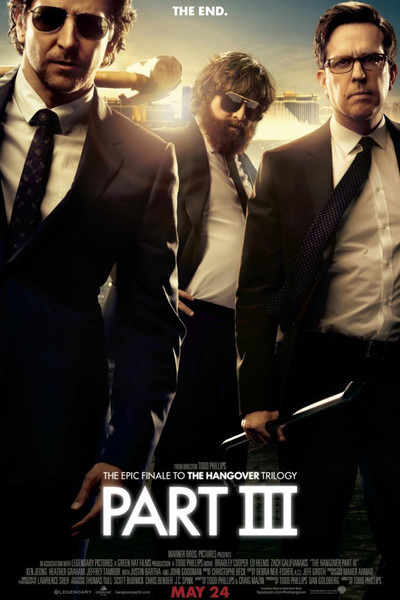