As someone tells Detective Go Gun-Soo (Lee Sun-Kyun), “You’ve got an interesting fate.” The dirty cop’s “fate” is the subject of “A Hard Day,” an effective thriller in which sheer propulsion is the artistic driving force. And I don’t mean that in a negative way. It’s a film that feels like something Liam Neeson and Jaume Collet-Serra would devise for the unlikely action star a la “Non-Stop” or “Run All Night.” If they're smart, they'll snatch up the remake rights while you're reading this. Like a Neeson vehicle, at its best, “A Hard Day” has a breakneck pace that allows one to easily dismiss the more ridiculous, downright nonsensical aspects of its plot. Only occasionally will the eyes roll. For the most part, it works.

“A Hard Day” wastes no time at all on something as silly as set-up. Detective Go is driving home at night in the rain from his mother’s funeral when someone steps out in front of his car. He plows into him, cracking his windshield and leaving the victim in a pool of blood. The already-troubled detective can’t take any more drama—the IA investigation going on at the station is enough to raise his stress level—and so he stashes the body in his trunk and drives off. Of course, he turns a corner right into a drunk driving checkpoint, and the cops there become suspicious. What follows is a bizarre scene that should give you an idea what to expect from “A Hard Day” as some inept police work ends in pepper spraying and tasing. This is a dark comedy thriller, the kind of film that doesn’t make social statements as much as seek to entertain for nearly two hours.

Of course, Go’s day gets much worse before it gets better. He has a body to dispose of, and, as his mother’s casket is being prepared for burial, he has a brainstorm. Where better to hide a corpse than in a coffin? Problem solved, right? Again, writer/director Kim Seong-Hun’s twisted, smart sense of humor kicks in as the movement of the corpse from trunk to casket involves a half-dozen yellow balloons and a remote-controlled toy soldier. I couldn’t even explain it. You just have to see it.

Go makes it back to the station to discover that the guy he hit was wanted for murder, giving him that classic movie actor look of “this is not going to end well” for pretty much the rest of the movie. The cops end up hunting for a man that’s already been killed in a hit and run by one of them. We haven’t really seen that before. And then Go gets the phone call. Someone knows about what he’s done. And he wants the body back in the worst way.

“A Hard Day” is shot in a lot of tight close-ups, designed to raise tension, although the technique gets a bit overheated at times. For the most part, Lee Sun-Kyun takes advantage of the tight presentation and frenetic pace of the film. He’s forced to play frazzled and confused a lot—he’s not really ever in complete control—but he does a good job at keeping us engaged, as does the writer/director, who never lets up the pace on a film that could have easily dragged. Again, it’s reminiscent of films like “Run All Night” or “Non-Stop” in the way it disguises narrative flaws through sheer momentum. It’s what you might call a Propulsive Thriller. You’re supposed to just get swept away by the force of it all. Don’t ask questions.

Looking a little deeper, I like that our morally shady protagonist is neither the smartest nor dumbest guy in the room. He makes plenty of mistakes. He thinks he’s way tougher than he is (there’s a great beat where his nemesis fakes being more hurt by him after he takes a few punches that tells you a lot about both characters) and comes off as practically a Coen Brothers leading man in his ability to take two steps back with every step forward.

It’s a bit sad that “A Hard Day” has about four endings, which damages its momentum to that point. The first one comes at around 90 minutes and would have made for a nice, tidy thriller. It has over 20 minutes to go. And there’s some great stuff in that final act, but it all feels a bit like overkill. Maybe the Neeson/Collet-Serra version can trim it down a bit. 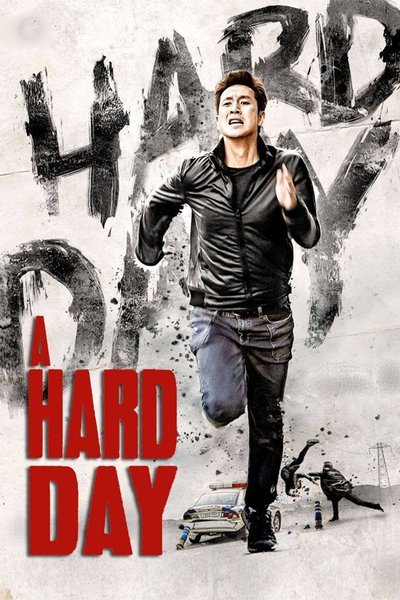