What is it about Stephen King’s novels and short stories that so often make their transition to the screen rocky, to say the least? Even when he adapts, as he does with “A Good Marriage,” starring Joan Allen and Anthony LaPaglia, the resulting product regularly fails to capture the breadth of his gifts as a storyteller. Perhaps it’s because so many of King’s best narratives involve something easier to relate to in the form of the written word than recreated on film: the horror behind the picket fence. Little is scarier than the realization that your husband (“The Shining”), rescuer (“Misery”), car (“Christine”) or even family pet (“Cujo”) are not what they seem. And yet that same identifiable horror in his fiction often falls flat in film. Flat is the kindest way to describe “A Good Marriage,” a King novella turned feature that could have worked as a short or an episode of “Masters of Horror” but truly tests viewer patience at 102 minutes. It’s arguably the dullest King film yet, despite solid work by LaPaglia to save it and a decent set-up that goes absolutely nowhere.

I remember seeing George Sluizer’s “The Vanishing” at a young enough age to be disturbed not just by its legendary ending but by the very concept that a madman could also be a family man. Wait, not all serial killers are drooling maniacs? I might be living next door to one? And he might have a wife? And kids?!?!?! How is that possible? King reportedly was inspired by the fact that The BTK Killer had a wife, who dealt with a lot of negative press when his binding/torturing/killing came to light. How could she not have known?

“A Good Marriage,” at its best, should be a war of wills between a maniac and the wife who just learned she has loved a maniac. And yet this war is surprisingly, even shockingly dull. It's filmed like a TV movie, with the central setting of Bob & Darcy's house feeling bizarrely like a set. Nothing in this world is lived in. There are no stakes. There's no reason to care.

Part of the problem is both in the way Darcy is crafted in the screenplay and the choices made by Allen in presenting her. This Darcy is cold, and almost callous at times. I simply never believed her dilemma. And if that’s true, all of “A Good Marriage” falls apart. LaPaglia does better work, almost finding a dark current of Coen-esque black comedy in the coin-collecting lunatic. And that right there is a big problem—when you find the BTK Killer more interesting than the wife who you need to root for in her efforts to stop him. 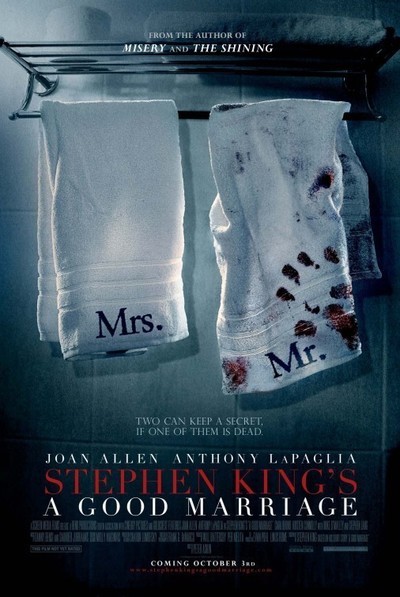 Rated R for violence/disturbing images, some sexuality and language