A Farewell to Fools

There's a moment in "A Farewell to Fools" that shimmers with possible greatness, a moment that is, sadly, far too brief. Gerard Depardieu plays Ipu, a Frenchman taken in by a kindly village in Romania following WWI, and he is a lumbering child-like giant who spends his days chopping wood and going fishing with a young boy who loves him. During one scene where he is invited to a fancy dinner, he says to one of the other guests present, "How did I look when I was young?" We bring our associations to everything we see in the cinema, and in that moment, our long associations with Depardieu, the international movie star, all of his great roles, come into play. He says the line with a wistfulness that threatens to overwhelm the film. For the most part, "A Farewell to Fools" rollicks along on its own bizarre and not successful path, comedic moments falling flat, emotional moments running shallow, but in that moment we can feel something else striving to break free.

Much like Fellini's "Amarcord", "A Farewell to Fools" is a farcical coming-of-age story taking place under the shadow of a military occupation. Romania is overrun by Nazis, and while the Germans are universally hated, everyone races around in a manic state trying to please them. A German soldier had his throat cut in the fields outside of town, and the Nazi overlords tell the frightened populace of the village that unless someone comes forward to claim responsibility, ten of the village's leading citizens will be executed the following day. Harvey Keitel plays Father Johanis, the local priest who gathers together the ten leading citizens (the mayor, the notary, the sheriff) and these reprehensible folks cook up a plan to make Ipu confess to the murder, to sacrifice himself for the good of the town.

Ipu is a Quasimodo-type character, who lives in a garret, listening to a scratchy recording of "The Marseilleise" and dreaming of his glory days as a French soldier. Ipu is unaware that he is being set up as the fall guy. He trusts the people who have taken him in, failing to recognize cruelty when it is right in front of him. He is swayed by Father Johanis' descriptions of the hero's funeral he will be given and the huge gravestone with gold-plated letters they will place in the cemetery for him. Alex (Bogdan Iancu), the young boy who is Ipu's only friend, sees what is happening and can't stop it. Ipu, as played by Depardieu, staggers around in a filthy white shirt, playing war games with his young friend, haunted by fragmented memories of his own wartime experiences, and easily overwhelmed by smooth talkers like Father Johanis.

Directed by Bogdan Dreyer, and based on a novel by Romanian screenwriter and author Titus Popovici, "A Farewell to Fools" wants to be a farce. It should be a farce. But farce is difficult in any circumstance, and while "A Farewell to Fools" sometimes hits the right tone, it can't sustain it. In one wacky sequence, the only successful one in the film, Ipu, convinced to go along with Father Johanis' plan, asks that they do a rehearsal of his grand funeral, so that he can at least see what it will be like. The mock funeral, involving the whole town, is very funny, involving villagers stealing flags in the dead of night, under the noses of the Nazis, to wrap the body ("No, not the swastika flag!" hisses the mayor. "The other flag!"), Ipu sitting up in his coffin to listen to Father Johanis' sermon, and a procession to the cemetery with a marching band playing a happy tune. A sequence like that tells you to not take things too seriously, to laugh at these people, to laugh at the self-serious importance of charlatans like Father Johanis. Evil stalks the village, but it's more ridiculous than anything else.

The film was shot in Romania, and Depardieu and Keitel are surrounded by a cast of Romanian actors. Keitel seems stiff and unsure of what film he is actually in, and the rest of the ensemble play their roles broadly, appropriate for farce but lost in the uneven tone of the whole. Romania's new wave is flourishing right now, with directors and producers and actors bringing forth dark, ironic, disturbing films detailing the chaos and problems inherent in the post-Ceaușescu era. "A Farewell to Fools" is a strangely flat entry in that roll call, with that one gleaming wistful moment from Depardieu suggesting the film it could have been. 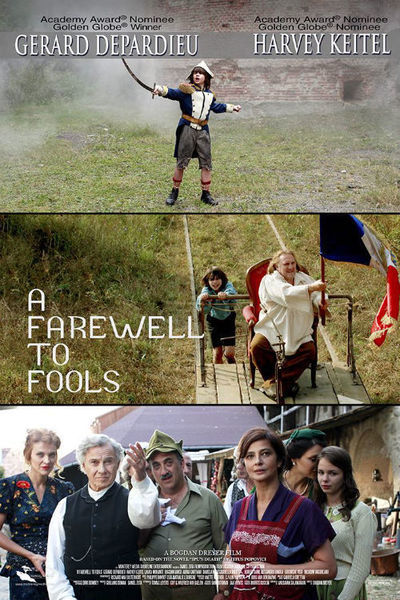