In spite of the seeming preponderance of contemporary celebrity artists, it’s relatively rare for a great painter to be successful in his or her own lifetime. That’s useful to bear in mind while watching “A Bigger Splash,” a 1973 film directed by Jack Hazan focusing on several years in the life of the British painter David Hockney.

This unusual and sometimes unsettling film is a kind of staged documentary that could not have been made without the cooperation of people who were going though genuine challenges in their life at the time. Its theme is encapsulated by something Hockney says early on: “When love goes wrong, there’s more than two people that suffer.” In “Splash” (and yes, Luca Guadagnino, for reasons of his own that are probably pretty indefensible, lifted this movie’s title for his own not-bad 2015 remake of the 1969 French thriller “La Piscine”), the love that goes wrong is between Hockney and Peter Schlesinger, who figures as a model in many of Hockney’s famous “pool paintings” of the early 1970s, many of which were painted in California.

But “A Bigger Splash” doesn’t have much water or sun, except in paintings or staged dream sequences. After the pouty Schlesinger leaves Hockney, the painter, whose platinum blonde hair and oversize black-rimmed spectacles made him an iconic pop art figure even as his painting split the difference between Warhol (the pop feel), Matisse (the color) and Francis Bacon (the anxiety, more understated here of course), falls into paralysis. He consults with friends, including the designer Celia Birtwill. He puts off gallery owners and managers. The critic and curator Henry Geldzahler comes to visit, bearing flowers.

Cheerfully pompous, Geldzahler discourages Hockney from going to New York for too long. “You’ll be competing with Milton Avery and Edward Hopper…the great New York painters. Southern California…you have already established yourself as the great Southern California painter.” Hockney absorbs all this but does not react.

Instead he torments himself with imagined scenes of Schlesinger making love with another man. And dreams of Schlesinger in white briefs, entering the scenes of past paintings. In his studio he takes a knife to a near-completed canvas, destroying it utterly.

He is then hit by inspiration. Two images, one of a semi-nude male figure seemingly at the bottom of a pool, the other of a fully dressed man at pool’s edge, peering down.

He conducts photographic studies of what he wants. These are shot at the pool of director Tony Richardson, at his house in the south of France. Nevertheless, this painting will conclude Hockney’s Los Angeles series. The manager who poses at Richardson’s pool doesn’t have the “right hair.”

The “right hair” belongs to Schlesinger. So Hockney goes to a tatty drag show where Schlesinger is working lights and screws up the courage to ask him to model one last time.

The resultant painting, “Portrait of an Artist (Pool with Two Figures)” had up until recently held the record for the highest price paid for a work of art at an auction — it sold for a little over $90 million in 2018. It’s still the highest-priced painting, as the piece that nudged it out of the artwork record was Jeff Koons’ sculpture “Rabbit,” which got $91 million.

This information is not appended to the restoration of this movie that premiered in June. The process as Hazan depicts it and, as it seems, Hockney lived it, has nothing to do with money. Yes, Hockney in the film is clearly well-off enough that he can piss off and mourn his lost love without the wolf approaching the door. Although the concerns shown by some people who live in close proximity to if not reliance on the Hockney machine of the time do reflect various levels of economic anxiety.

That Hockney’s arguable self-indulgence eventually led to the creation of a landmark of 20th century modern art is not given much weight here either, as the film is a contemporary portrait of the artist. What the movie, with its combinations of staged conversations and encounters and  intimate documentary glimpses, is finally about is how a certain artist has to work. Hockney doesn’t theorize or make grand pronouncements or whine about how lonely he is. He marks time until something within him moves, and he’s compelled to paint. Martin Scorsese has praised this film, and given that he sometimes used to say, “If I could explain the impetus behind my films in words, I wouldn’t have to make the film” (or words to that effect), it’s easy to see why. Hockney gets his feelings out, justifies them to himself, though painting. And it’s revealing that the film is framed by scenes staged very late in the process of making the film, in which Hockney is seen to have pretty much all but forgotten Schlesinger. 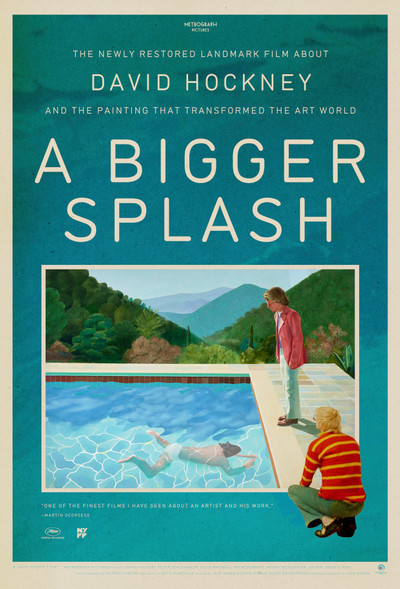 David Hockney as Himself

Peter Schlesinger as Himself

Celia Birtwell as Herself

Ossie Clark as Himself

Patrick Procktor as Himself