“’71” sets its thriller elements against the backdrop of The Troubles, the 30-year Northern Ireland conflict that also inspired films by Jim Sheridan and Paul Greengrass. Director Yann Demange’s feature film debut merges Greengrass’ kinetic camerawork with Sheridan’s character-driven drama; the result is a taut, suspenseful and involving feature that runs a tight 99 minutes. At its center is a very good performance by Jack O’Connell. Last seen in “Starred Up” and Angelina Jolie’s “Unbroken,” O’Connell continues to bring equal measures of toughness and vulnerability to his characters. Despite his good looks, there’s an everyman’s quality to him, which he uses to full effect in “’71.”

O’Connell plays Gary Hook, a British soldier whose troop has been sent to Belfast to investigate an incident of violence. Prior to his deployment, we silently observe him interacting with his brother and his family. The silence provides an eerie calm before the storm; moments of serenity will be in short supply once Hook begins his mission. Once in Belfast, Hook and another soldier are separated from their retreating company during a chaotic riot. When the other soldier is brutally killed, Hook takes off for parts unknown to him. Pursued by angry Belfast denizens, Hook runs deeper and deeper into enemy territory.

As an action film, “’71” runs the risk of trivializing the horrific events of its setting. Screenwriter Gregory Burke avoids this by occasionally pausing the action to focus on the plight of characters on both sides of the conflict. As the lone man against many, Hook naturally draws our concern, but “’71” widens the net to show how deeply it ensnares friend and foe alike. The film spends as much time on Hook dodging danger as it does on people hatching plans to further agendas and manipulate alliances. There are British spies within Belfast who are loyal to that cause yet able to casually straddle the fence between the two factions. Both sides harbor folks who suddenly turn in traitorous or conspiratorial directions. Hook finds assistance and threat in unexpected places, and a constant stream of overwhelming cynicism flows just beneath the surface, waiting to be tapped whenever things seem too hopeful.

Besides Hook, several other characters emerge as the narrative progresses. Sean (Barry Keogan), one of the teenagers involved in the shooting of Hook’s partner, is shown returning home to a mother who is at first oblivious to his outside activities. Out to prove his manhood to his mates, Sean emerges as something of a tragic yet heroic figure in “’71,” avoiding the pitfalls of being demonized. His last scene with Hook has a stark, conflicted power that’s hard to shake; it goes from an unbearable scene of pleading on Hook’s part, to a cheap (though effective) audience-pleasing cliché, before climaxing in a shocking coda of unfairness.

Another character who leaves an impression is a young boy who brings Hook to one of the area’s safe havens for soldiers. He and Hook have a rapport meant to remind us of Hook’s relationship with his brother. Though the horrific outcome of this temporary respite is never in doubt, “’71” does not make these brief bonding scenes cutesy or overly sentimental. We’re always reminded of the layers of complexity involved in interacting with a wanted man. This is further highlighted in the scenes between the doctor who risks his own life to tend to Hook’s wounds, and the daughter who is unsure if her father should help.

Though it ably handles the dramatic scenes, “’71” is at its best when Hook is on the run. The riot sequence is excellent. Demange’s camerawork is urgent and chaotic, yet the audience is never lost while following the action. The ensuing foot chase is handled with dexterity and a sense of terror, culminating in the film’s best moment for Demange and O’Connell: Momentarily evading his pursuers, O’Connell curls up into a ball of exhaustion and fear. The camera remains fixed on him, and the soundtrack isolates the sound of his heavy breathing just before it breaks into the sobs of the terrified, inexperienced soldier baptized by fire in his first brush with death.

“’71” played in last year’s Toronto International Film Festival and received consideration at this year’s BAFTA awards. While it occasionally dips into formula, it is nevertheless a compelling, edge-of-your-seat thriller that weighs the innocence lost not only by its hero but by those who antagonize him. 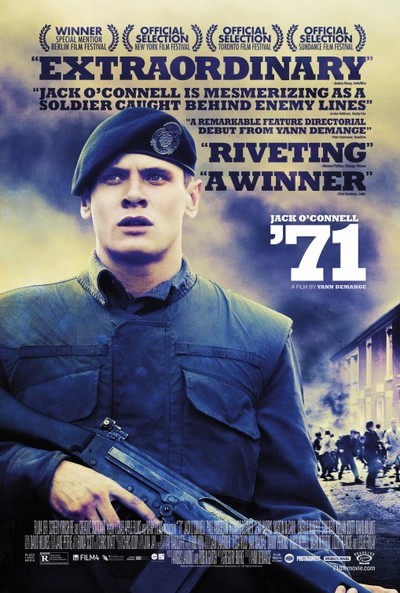