“365 Days: This Day” is a movie about sex and shopping. Who doesn’t like sex and shopping? Viewed through this narrow lens, it makes sense that the Polish erotic romance “365 Days” rose to popularity, first in cinemas and then on Netflix, where viewers could indulge their most prurient interests in private. But the following for the franchise that sprung from that surprise hit stands in defiant opposition to the quality of the films themselves. It’s stunning how blatantly this Euro-softcore series rips off "Fifty Shades of Grey," itself “Twilight” fan fiction blown up to mega-hit size. And that’s the least of these movies’ issues.

Underneath its repellant rape-culture premise, the first “365 Days” movie contained a nugget of appealing fantasy: Namely, the idea of giving up all the irritating obligations and boorish men that fill the lives of independent, overworked modern women and letting someone else make the decisions for a while. It didn’t take a full calendar year for ordinary Warsaw girl Laura (Anna Maria Sieklucka) to fall for Italian mafia kingpin Don Massimo (Michele Morrone): Sure, he drugged and kidnapped her while she was on vacation in Sicily, promising to free her after 365 days if she didn’t learn to love him in the meantime. But the man looks like an underwear model and spends like a Russian oligarch. In this film’s relentlessly shallow worldview, those are the only things that matter.

That leaves the Netflix-produced sequel, “365 Days: This Day,” with as little to do as Laura, who goes from unwilling captive to bored housewife in record time. Like “Fifty Shades of Grey,” “365 Days” inserts and throws out storylines according to its own harebrained whims. At the end of the last movie, it seemed as though Laura would never get to live her dream of buying an obscenely expensive wedding dress—oh, and marrying the man she loves (or, at least, ate her out on a yacht). But as the sequel opens with the camera swirling around Laura and Massimo as they try to swallow each others’ tonsils on an Instagram-worthy Italian cliff, it’s like Laura’s brush with death in a fiery car crash never happened. And once the luxurious formalities of lavish wedding and exotic honeymoon are dispensed with, “365 Days: This Day” looks around and says to itself, “What’s next?”

What’s next is a new man in Laura’s life, ostensible gardener Nacho (Simone Susinna). It’s hard not to get the giggles when Nacho is introduced strolling towards the camera in a trucker hat and ripped jeans. It’s even more difficult not to laugh when this humble working man lives in a luxe-bohemian beach shack that looks like a boutique hotel in Tulum. (It’s key to the “365 Days” lifestyle that everyone is secretly rich, or at least possessed of an impeccable eye for interior design.) Where Massimo is dominant and controlling, Nacho is tender and non-threatening. And so, when Laura walks in on Massimo in flagrante delicto with his ex, she runs off with Nacho, who will serve as her emotional support hunk for the remainder of the film.

Laura and Nacho don’t actually have sex, although she sure does fantasize about it. That’s because, like “Fifty Shades of Grey,” “365 Days” is a conservative daydream. Look past the frequent, vigorous, lightly kinky softcore scenes—like its predecessor, “365 Days: This Day” flirts with male and female full-frontal nudity throughout—and “365 Days: This Day” is, at its core, selling the idea of marrying a rich man and having his babies. There are as many shopping montages in this film as there are sex ones, and all are filmed in the decadent, substance-free style of a perfume commercial. Expensive watches and fast cars, couture gowns and high-end sex toys, gourmet breakfasts on the terrace overlooking a million-dollar view: Massimo can give Laura all of this, which makes “365 Days: This Day” a romance. If he were poor, he’d just be a rapist.

A solid 60 percent of “365 Days: This Day” is made up of aspirational and/or erotic montage. But when it comes to filling that other 40 percent, the movie does not have the good sense to stick to a simple conflict between bad boy and nice guy. Coked-out identical twins, warring Mafia families, and the most inept villain duo this side of Team Rocket in "Pokémon" all factor into the sloppily constructed storyline, which culminates in a jaw-droppingly incompetent action climax. It’s unclear what the Mafia does, exactly, in “365 Days: This Day.” Mostly, they seem to whisper in each others’ ears at parties and, one assumes, work out. (Is it a requirement that all Sicilian Mafiosos under the age of 60 have six packs, or just a bonus?)

As for the performances, why mince words now? They’re all terrible. But the “comic relief” provided by Laura and Massimo’s BFFs, Olga (Magdalena Lamparska) and Domenico (Otar Saralidze), is especially so. And as immature as it is to laugh at dialogue written in what is obviously not the screenwriters’ first language, good luck suppressing a snicker when Olga yells, “I can’t calm down! I’m Polish!” The music is similarly amusing, a bland R&B-ish mishmash that sounds, appropriately enough, like what you might hear over the loudspeaker at a fast-fashion emporium.

“365 Days: This Day” is barely a movie. It’s the emotionally bankrupt id of late capitalism, a braindead miasma of choreographed sex and nonsensical fighting driven by greed and violence masquerading as passion. The ickiness was right there on the surface of “365 Days.” But although it’s more vanilla, “365 Days: This Day” is more insidious, because it argues that the ends—high-end luxury goods, sculpted butt cheeks—justify the means—kidnapping, coercion, misogyny. This time around, Laura is objectifying herself. Somehow, that’s even worse. 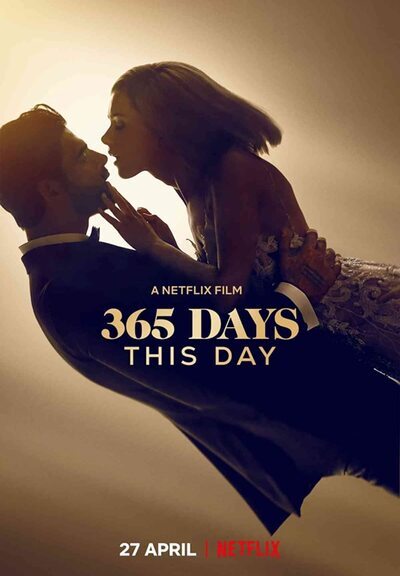