“21 Bridges” begins with the funeral of a cop, a uniformed officer who took out three of the men who shot at him before falling. That cop’s young son is there, and he’ll grow up to be the police detective André Davis, played by Chadwick Boseman, on whose shoulders this movie’s narrative will roll. The sermon is passionate, the grieving deep. Director Brian Kirk cuts to an overhead shot of the outside of the church. The kind of thing you’ve now seen hundreds of times, taken from a drone, looking directly down on the scene from a great height. But it’s not like every other drone shot because the cut occurs directly before the moment that the hundreds of cops outside the church snap a perfectly synchronized salute. This is a drone shot that justifies its existence with a significant action, one that demonstrates with action the full import of this event.

It’s this kind of mindful direction and editing that helps make “21 Bridges” one of the most entertaining and thoughtful American policiers in recent memory. Boseman, who also is a co-producer of the movie, does a lot of running and driving and gun-pointing and car-hood slamming here, but his character also does a lot of thinking—and a lot of maneuvering. While there’s not a lot of explicit talk about race, he’s positioned as an African-American cop entering territory that’s all the more dangerous because of his skin color. "21 Bridges" is again very smart in making that more implicit than explicit.

The lawbreakers here, and boy do they ever break the law, are a white guy and a black guy: Taylor Kitsch (who’s finding a fruitful niche in character roles) and Stephan James are armed-to-the-teeth small-timers who break into a restaurant to lift 30 kilos of cocaine from its freezer. Only it’s more like 100 kilos, and a near-army of cops comes to stope them. A massacre ensues, and it’s Davis, who has a history of shootings that gets Internal Affairs’ hackles up, that’s dispatched to track them.

That works fine for J.K. Simmons, as the captain of the dead cops, who expects Davis to take the killers out once he finds them. Davis has a late-night strategy: close off Manhattan (hence the title—this entails shutting down 21 bridges, a major inconvenience even in the wee hours of the morning) and “flood the island with blue.” One blue Davis doesn’t want with him is a narcotics detective and single mother played by Sienna Miller, but she says “you can use me or fight me” and given how eager NYPD brass is for her to be there, he capitulates.

You sense that some things are amiss here? So do the robbers played by Kitsch and James, who are a lot more sympathetically portrayed than most cop killers tend to be. Not that “21 Bridges” condones their actions. But once the bad guys find themselves in a safe house, with a “cleaner” whose last instructions to the fellows is to take a couple of thumb drives with them on the way ahead of the other cops on their tail, the Something Rotten In Denmark theme takes definite hold. Piecing things together, Davis realizes that he’s got to keep at least one of these guys alive.

The script, by Adam Mervis and Matthew Michael Carnahan, doesn’t seek to spin the viewer’s head with a lot of twists. Instead, it aims to keep you invested in Boseman/Davis’ own ratiocinations and the moral imperatives he attaches to each new discovery he makes. But, of course, the movie is also about standoff, shoot-outs, foot chases, car chases, and more. Which Kirk delivers in tight, economic style. And all in less than an hour and forty minutes. These days it’s no small feat to tie up an intelligent action thriller with such assuredness, and it’s refreshing to see. 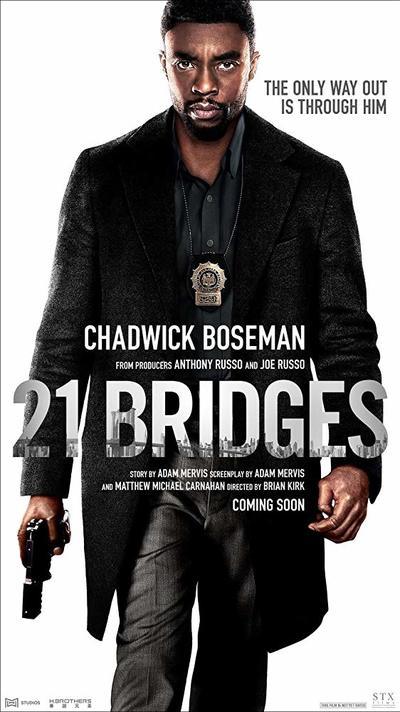