Strictly by the numbers

If the thrill of gambling were really about winning, there would be too few gamblers to support the multibillion-dollar Vegas gambling industry. Everybody knows that the odds are predetermined to favor the house, and that people play the games for the rush, not the payoff. Bettors are many, winners are few. That's what makes it a reliably profitable business. Like insurance. The premiums for participating in the game outweigh the payouts the company makes as incentives to keep the players playing.

So how exciting would it be if, say, somebody devised a system that used simple math to give a blackjack player the edge over the dealer? "Inspired by" the real-life story of the M.I.T. students who took Las Vegas casinos for millions, "21" has been reshaped to fit a simple movie template -- and it's nearly as much fun as watching an insurance professional compute actuarial tables.

In "21," directed by Robert Luketic, the worst thing a gamester can be accused of is gambling. "Don't give in to your emotions," M.I.T. professor Micky Rosa tells his blackjack students. "Play the system." Good advice for a card-counting scheme. Bad advice for a movie. If you want to see how a formatted screenplay looks when it's actually on the screen (you can just about count the page numbers as they flip by, and maybe measure the margins, too), "21" may provide a practical lesson: How to follow all the "rules" and end up with zero. It's not unwatchable, but you could watch it with your eyeballs tied behind your back and enjoy it just as much.

Here's another example of a good story turned into a purely generic one -- no doubt with the aid of a Bob McKee screenwriting seminar and textbook.

Act I: M.I.T. undergrad Ben Campbell (Jim Sturgess) is a nerdish wicked-smart Bostonian white guy working with his best friends (a fat guy and a Persian-American guy) on a project for a robotics competition. He really needs a $300,000 scholarship to get into Harvard medical school, but he's only one of 72 talented prospects. He's recruited by Professor Rosa (Kevin Spacey) to join a secret cabal of card-counters with a scheme to hit Vegas on weekends and make a fortune. He resists. A Beautiful Girl (Kate Bosworth) attempts to woo him. He resists. OK, he really needs the money, so he joins up -- but just until he can get enough for full college tuition.

He learns the blackjack system in a montage sequence or two and passes the test. The Beautiful Girl rebuffs his advances in an attempt to maintain a strictly professional relationship.

Act II: The team goes to Vegas and the guys win. Another montage sequence? Maybe. It's getting a little fuzzy. But wait: A casino security guy named Cole Williams (Laurence Fishburne) starts to notice something -- and not a moment too soon because he's losing all his business to high-tech biometric face-recognition software. Technology! Drat! Card-counting isn't illegal, but the casinos want you to know that if you're caught doing it, they might take you down in the basement and beat the living craps out of you.

The Beautiful Girl retracts her rebuff. The Hard Rock Casino comps her a suite in which she and Ben enjoy a brief, soft-focus sex-scene montage. "It seemed too good to be true," Ben says in voiceover. "And it felt like it was never going to end." It does. Ben is no longer the same guy he was back in Boston. He loses -- money, his friends, the Beautiful Girl, his mentor, everything. Bummer.

Act III: Ben has one last chance. He makes up with Rosa and the Girl, and the team reunites for one last Big Score in Vegas. Everything works out exactly as the screenwriters have planned. The End.

Meanwhile, British actor Sturgess ("The Other Boleyn Girl") gets to play an American with traces of a peculiar accent (based on Jeff Ma, a Chinese-American who was called Kevin Lewis in the book); Spacey gets to alternate his slick good-cop schtick ("L.A. Confidential") with his steely bad-cop schtick ("Swimming With Sharks"); Luketic ("Legally Blonde," "Monster-in-Law") gets to direct another picture, and Bosworth gets to wear some wigs.

The movie itself has a tell: Watch for the moment when somebody obviously pulls a punch. If you hadn't figured out the rest of the movie by then, it gives away the whole thing. 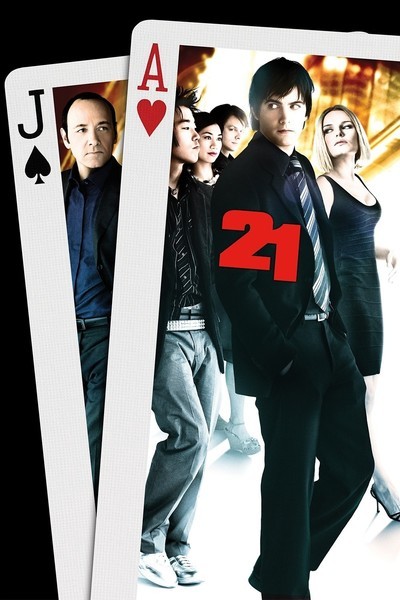 Rated PG-13 for some violence, and sexual content including partial nudity