Seth Larney’s “2067” is more frustrating than the average indie sci-fi misfire because there’s so much potential embedded in this clever story. The bare-bones storytelling here is engaging and interesting in a way that recalls “12 Monkeys” in how it plays with the future and time travel. The optimistic, twisting core of what “2067” is about will keep genre fans engaged even as the increasingly bad performances and frustrating writing pushes them away at the same time.

Kodi Smit-McPhee is quite simply ineffective as Ethan Whyte, a resident of a bleak future that has been torn apart by climate change. Basically, as we all worry it will, the planet started dying very quickly around, well now, leading to a lack of oxygen and widespread disease. Larney’s vision of the future is a dire one, a warning of what we could be in for if climate change isn’t the most important issue of all upcoming elections.

Life may be bad for Ethan, who works on the city’s unstable nuclear reactor, and his sick wife (Sana’a Shaik), but he is presented with an insane opportunity. It turns out that scientists have developed a portal to the future, which has a different poignancy than it would in a normal time travel movie if you think about where this planet is headed. Imagine discovering travel to the future is possible and receiving a message back from hundreds of years from now when you live in a time when it feels like your generation could be the last. The fact that a message comes back from centuries ahead of now doesn’t just say something about technology but says more about human survival. There’s someone on the other end. How did they reverse the course of an increasingly unlivable planet? And why is the message they’re bouncing back “Send Ethan Whyte”?

Ethan is told he can jump forward to see what the heck is going on, but that they don’t really have a way to get him back. Can he figure out why the future wants him, if he’s the one to make that future possible, and survive? When he lands in the far future, he finds something entirely unexpected. There’s plant growth, but no people, and a skeleton that makes his entire venture all the more bizarre. It’s a solid story that clearly owes a great deal to famous time travel sci-fi films of the past both in how it plays out and why Ethan is the key to the future. It’s the kind of movie that’s easy to stick with just to see how its mysteries unfold.

Sadly, everything else fights that viewer engagement. Smit-McPhee has been strong in other films but he’s either poorly directed or cast here, never figuring this character out and coming off almost abrasively in his inconsistent emotions. He and co-star Ryan Kwanten have been saddled with one clichéd exchange after the other. Neither actor forced to anchor this highbrow sci-fi are particularly good, but I blame the writing and direction more than them. As “2067” intensifies, Larney turns up the melodrama and tears to 11, pushing emotions that it doesn’t feel like the film has earned. Ambitious storytelling is valuable, but Larney fails his own idea by not having a stronger edit on his dialogue and a more confident hand when it comes to directing performance.

I will say that Larney has a strong eye that makes up for a lot of the cringeworthy dialogue. “2067” is clearly a low-budget affair, but Larney makes the most of what he has, employing a vision of the future that isn’t metal and fire but green with vegetation. We’re all hoping for a future that’s green, right?

Now available in theaters and on digital platforms 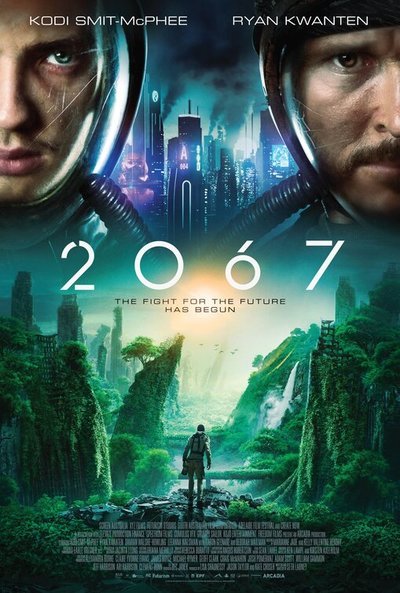