When looked at solely in terms of the story that it is telling, there is probably very little new to viewers in the French romantic-comedy-drama "2 Autumns, 3 Winters." No, what separates this film from others of its type is the highly specialized manner in which writer-director Sebastien Betbeder has elected to recount the lives and loves of a group of young Parisians—an approach that will no doubt divide viewers between those who will find it intriguing and innovative and those who will find it to be a needlessly complicated and overly self-conscious distraction.

Arman (Vincent Macaigne), a former art student who now finds himself adrift in a string of unrewarding jobs has just turned 33 and determines to pull his life together at last. While jogging in the park one day, he literally runs into the lovely Amelie (Maud Wyler), although only a few fumbling words are exchanged between them before they separate. Arman is, of course, besotted, but when he returns to the park over the next couple of weeks, she is nowhere to be found, and he despairs of ever seeing her again.

Of course, Arman and Amelie are destined to see each other again but if their initial meeting was a classic example of the cinematic convention known as the Meet Cute, their reunion is a much bleaker affair—he rescues her from being sexually assaulted by a couple of muggers and winds up getting stabbed in the stomach for his troubles. Amelie stays by his side during his convalescence, and they begin dating when he gets out of the hospital. Over the course of the seasons mentioned in the title, the story charts the ups and downs of their relationship from the beginning to the end...and perhaps beyond.

Meanwhile, in a parallel storyline, Arman's best friend, Benjamin (Bastien Bouillon), is coming home from visiting Arman in the hospital one evening when he is felled by a sudden stroke and spends the entire night half-hidden in the bushes before he is eventually discovered. After some initial struggles (such as a doctor whose entire analysis seems to be based on whether he knows that Sarkozy is the leader of the land), Benjamin makes a surprisingly quick and effective recovery, aided in no small part by Katia (Audrey Bastien), a speech therapist whose relationship soon drifts from the professional to the personal. Benjamin also occasionally receives messages from his sister Lucie (Pauline Etienne), who apparently had telepathic abilities.

This all sounds ordinary enough but in telling "2 Autumns, 3 Winters," Betbeder has broken the narrative up into 40 vignette-like segments—some only lasting a minute or two and most bearing an amusing title—with the first 20 counting up to a significant event in the course of Arman and Amelie's relationship and the last 20 counting back from it. To add to the quirkiness, Betbeder not only has his characters, especially Arman, address the audience directly at many points but even has them shift from talking to others on the screen to the viewers in the middle of a sentence with such abruptness that it takes a few seconds to actually register the shift.

There will no doubt be some viewers who will find all of this to be little more than empty gimmickry designed to add interest to the seemingly ordinary proceedings. Others will find Betbeder's take to be an extension of what Jean-Luc Godard did all those years ago when he took a story that was ordinary to the point of cliche, fused it with an innovative narrative style and pretty much revolutionized the world of cinema in "Breathless." (To further extend the connection between this film and the classics of the Nouvelle Vague movement, Betbeder has shot in the old Academy screen ratio and mixes HD video and 16mm footage throughout.)

If "2 Summers, 3 Winters" had nothing else going for it beyond those gimmicks, it probably would have grown tiresome fairly quickly but it has several other factors in its favor as well. Betbeder's screenplay has moments of great wit and charm (the scene in which Arman calls Amelie for a date and cites both his ownership of a refrigerator and Bresson's "Four Nights of a Dreamer" in his lead-up to the big question is a riot) and when it shifts into a darker mood in the second half, the change in dramatic gears feels natural and not merely the machinations of a writer trying to create drama. And while the cast may not include any names that are familiar in these parts, they are all effortlessly charming and engaging throughout. Even when the film flirts with cutesiness, as with the stuff with the telepathic sister, it handles it in such a way that it kind of works.

Because "2 Autumns, 3 Winters" is opening during the crush of summertime box-office behemoths, it will no doubt be overlooked by audiences clamoring to see "Edge of Tomorrow" and its ilk. Because of its lack of obvious hooks or familiar faces, it will also face an uphill battle on the art-house circuit. Let its modest but very real charms work. This is a film with wit, style and even a couple of moments of real emotional power that deserves to be seen.

This review is dedicated to Dianne Papierniak Trenholm. 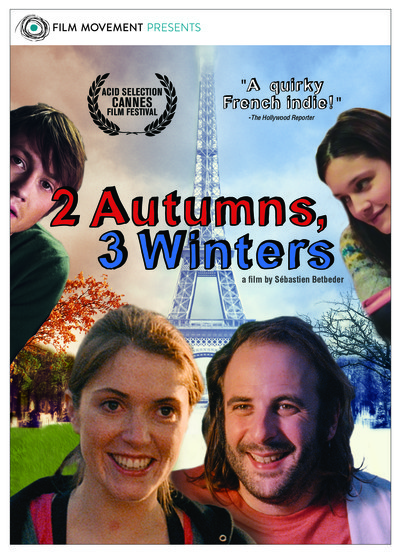