2017 has truly been the year of Stephen King, but the last in a long line of films and TV shows is, in some ways, the most surprising. A remake of “It” was inevitable, even if no one expected it to be the box office behemoth it became. “The Dark Tower” was in some state of pre-production for years, and Mike Flanagan personally brought his vision for “Gerald’s Game” to the big/small screen of Netflix. On TV, “The Mist” felt like an obvious choice in a post-“The Walking Dead” world (and was truly awful) while the bestselling success of “Mr. Mercedes” made that TV adaptation inevitable. Which brings us to “1922,” a 131-page novella contained in King’s 2010 anthology Full Dark, No Stars. It’s a decent piece of work, but not one that screams feature film, and the relative thinness of the source material hurts Zak Hilditch’s film of the same name.

With leathered skin from working in the fields and a remarkable Southern drawl, Thomas Jane plays Wilfred James, a Nebraska farmer with a bitter wife named Arlette (Molly Parker) and a loyal son named Henry (Dylan Schmid). Arlette clearly dislikes life in the country and wants to sell her half of the farm to a local livestock company, but you can literally see Wilf’s skin crawl when his wife dares mention moving to the city. That’s for the dumb people, and the James family isn’t dumb.

Wilf commits his first despicable act when he weaponizes his son’s first love. Henry has fallen for a neighbor girl named Shannon Cotterie (Kaitlyn Bernard), and moving to the city will tear these young lovers apart. For reasons that aren’t completely captured in a believable way, Wilfred decides that the only way to make this dilemma go away is for Arlette to die, and he convinces his son to help him. “1922” is told primarily in flashback, as a clearly-troubled Wilfred has come to a hotel room like the protagonist of Edgar Allen Poe’s The Tell-tale Heart, haunted by demons he himself created. So there’s a sense that we’re being told a story from an unreliable narrator, although not quite enough is made of that cinematically. No, for the most part, “1922” draws a straight line down a hill from a violent act to complete insanity, a not uncommon theme for King, who has long been fascinated by what happens when men choose murder over reason.

There is a very fine line between a film that burns slowly and one that just drags, and “1922” falls into the latter category a few too many times. The fact is that it’s quite difficult to make a film about a man who may be going insane because you have to physically manifest what may just be the visions of a guilty man’s conscience. To his credit, Thomas Jane does a marvelous job of conveying what’s asked of him by material and filmmaker. At first, his slow drawl seemed a bit overdone, but the character work here is strong, especially as Wilf goes deeper and deeper over the edge of sanity. The problem is how little there is of interest here outside of Jane’s work, which is again indicative of the issues with bringing a confessional novella to feature film form. The film isn't visually striking enough, the dialogue isn't memorable, and the message of the film is the relatively straightforward horror classic: don't kill people.

Some of the imagery contained in the final half-hour of “1922” nearly justifies the journey to get there, I just couldn’t help thinking that there’s a tighter, more thrilling version of this story that runs much shorter, like an hour-long anthology horror series. Ultimately, it’s the familiar case of a short story stretched too thin in a feature film, resulting in what will likely be the least-remembered project from 2017: The Year of King. Well, except for that “The Mist” nonsense. 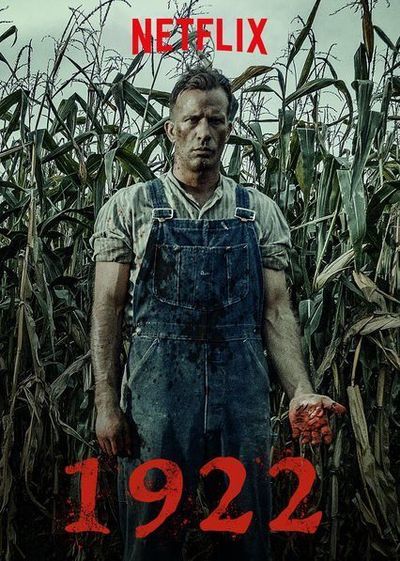