Darkly funny and deeply twisted, "13 Sins" grabs you from its startling opening sequence and doesn’t let go. You’ll squirm and cringe—and have to watch through splayed fingers during a couple of scenes—but you’ll be gripped throughout, and you’ll never know where the story is headed.

Director and co-writer Daniel Stamm poses an intriguing moral conundrum here. He presents us with a protagonist who carries out a series of increasingly disgusting and horrific acts, all for financial gain, and yet you inadvertently find yourself rooting for him. "13 Sins" is a remake of the 2006 Thai film "13 Beloved" (also known as "13: Game of Death"), but it’s totally attuned to the desperation of current American economic woes as well as an impatient, culturally-driven desire to get rich quick.

Much of the emotional connection we make with the film comes from Mark Webber’s performance. As milquetoast salesman Elliot Brindle, Webber offers us a put-upon everyman, but someone who’s decent-hearted enough (and, thankfully, not whiny about his troubles) that you want to see him succeed. And as the game he agrees to play turns gorier and the body count piles up, we can’t help but empathize with him.

Besides, who among us wouldn’t say yes to the perky, inviting voice on the other end of the line when the cell phone rings?

This mysterious, nameless man knows Elliot has just been fired from his job, and that he’s about to get married in a couple of days, and that he and his fiancée, Shelby (Rutina Wesley), have a baby on the way. He knows that because Elliot has lost his job, he no longer has health insurance, which means he no longer can provide care for his developmentally disabled brother, Michael (a great Devon Graye). And he knows that the brothers’ crass, racist father (Tom Bower) has just been kicked out of his retirement home, which means he’ll have to move in with Elliot and Shelby—who happens to be black.

Already tens of thousands of dollars in debt before this horrendous and eventful day began, Elliot agrees to the prospect of making $6.2 million—fast. All he has to do is fulfill a series of 13 challenges. After completing each one, he’ll find that money has been deposited in his bank account in increasing amounts with each step he takes. But if he pulls out or fails to cooperate at any point, he loses everything—and it’s clear he’s being watched at all times.

The challenges are innocuous at first, if a little gross. Kill a fly ($1,000). Now eat it ($3,000). No. 3 made me laugh out loud, merely for the chipper tone in the caller’s voice as he says something awful: "For $5,000, make a child cry!" It’s a scavenger hunt with a sick sense of humor. But it doesn’t take long for the demands to turn drastic.

Stamm, the German-born director whose last film was 2010’s "The Last Exorcism," finds inspired avenues into the kind of horror material we only think we know. His previous movie was a faux documentary about an Evangelical Louisiana preacher whose exorcisms are all a scam. It was one of the scariest movies to come along in a while in a stripped-down, understated way.

His production values may be a bit glossier here and his screenplay (which he co-write with David Birke) may feel more structured and less naturalistic, but his inventive instincts remain intact. This is especially true when it comes to the way he reveals each challenge. It’s not just: the phone rings, the order comes, we see Elliot carrying the order out. There are surprises in the way they play out every time.

Another unexpected element is the fact that Elliot finds himself enjoying his grotesque behavior—and we find ourselves enjoying watching him finding a sense of self in the process. Stamm also handles Elliot’s relationship with his disabled brother in an intelligent, honest way that’s free of mawkishness or feel-good delicacy.

But—there’s not nearly enough Ron Perlman in a small supporting role as the police officer who’s trying to piece together all of Elliot’s varied crimes. And there are probably a couple twists too many in the jam-packed conclusion. But for the most part, "13 Sins" is solid, dark fun which also has something substantive on its mind. See it with someone who isn’t easily offended. 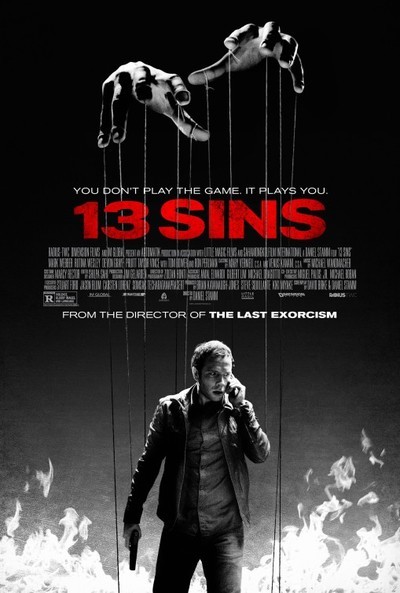