Wholesome in the most “pull yourself up by your bootstraps” brand of mythical Americanism, “12 Mighty Orphans” is engineered to rouse emotions with uncritical pride, never reaching the less immaculate corners of the historical period it employs as canvas.

As schematic as they come, this is a movie about football innovation and good people helping parentless teenagers transition into more self-confident young men. Reworked from Jim Dent’s novel, about the real 1930s-1940s Mighty Mites team from the Masonic Home and School of Texas, this on-screen reformatting directed by Ty Roberts is competently pedestrian.

A country emerging from the Great Depression serves as backdrop. President Roosevelt has put the New Deal in motion and the nation thirsts for hopeful stories that speak of a better tomorrow for all. Enveloped in that sentimentality is teacher, coach, and war hero Rusty Russell (Luke Wilson). He moves his family to an orphanage, the Masonic Home, to impact the resident boys’ lives through academics and, more vehemently, on the field.

Deployed early on and repeated throughout, bombastic editing choices call back to Rusty’s days on the battleground, creating visual parallels between war and football. These bits, which intermingle archival footage and black-and-white reenactments, cheapen the otherwise visual pleasantness of David McFarland’s cinematography (even if he likely shot those unfortunate snippets too).

The majority of the boys we meet, including the ones that make the cut for the dozen in question, don't get much of a backstory; some never even speak. Hardy Brown (Jake Austin Walker), the requisite unruly sheep, is the notable exception. Following both biblical parables and clichés pertinent to movies about coaches and underdog teams, he is the prodigal child that eventually comes around proving himself indispensable. Without Rusty saving him, he’s the MVP that could have easily gone MIA.

Pent up anger permeates Walker’s performance. His dangerous self-destructiveness and pessimism give “12 Mighty Orphans” a slightly edgier tone. He cuts through Russell’s saccharine determinism, in spite of us being aware of the formulaic progression of the story. Given a more layered playfield to enact his craft, this young actor is capable of explosive, can’t-look-away moments.

At least Roberts, who co-wrote the screenplay with Lane Garrison and Kevin Meyer, knows his actors are the only inalienable assets. Wilson’s straight man aplomb, delivered in loud motivational speeches sharing his past lack of self-worth as an orphan himself, hammer home his position as a pastor of the field unwilling to leave his sheep unattended. A few instances of PTSD add vulnerability to this character, which also offers Wilson a shot at heartfelt paternalism. This based-on-a-true-story drama will look good on Wilson's resume.

Rusty’s strict persona finds its counterpart in Martin Sheen’s Doctor Hall, a man committed to these hooligans turned sportsmen but who battles an alcohol problem. The humble sharpness of Wilson and Sheen’s duo contrasts with the cartoonish villains trying to derail the team’s ascent to glory, one of them played by a clumsily violent Wayne Knight.

There’s a heavy reliance on montages to pack so much information they almost feel like trailers for their own movie. As Russell begins the player’s makeover from the inside out, feeding their minds with affirmations, we witness their rise in the public eye, with Roosevelt himself allegedly invested in their triumphs. Scrawny and inexperienced, their upper hand comes from their coach’s unique formations to maximize their speed. Russell is credited with devising the “spread defense” widely used now but a novelty then.

Surprisingly, with a story that appears so inherently conservative and WASPy, there is no overtly religious messaging. It truly is mostly concerned with the personal improvement by way of a mentor, even if it sort of dismisses all of the other factors that impoverished people have against them. Just like Mighty Mites become beacons for the masses, “12 Mighty Orphans” sells gung-ho aspirationalism.

In line with that forced innocence of the narrative, there’s no mention of the teens’ sexual awakening or much regarding their romantic interest in the girls they share the institution with or with their new fans. Rusty and Juanita Russell’s unbreakable marriage is the only union presented as legitimate (a player is also briefly seen giving his girlfriend a ring). In a way, Roberts’ movie exists in the same universe as “The Conjuring” franchise, which peddles nostalgia for a country of the past with traditional values and defined societal roles.

On a similar note, at least two of the boys presumably have Latin American heritage, probably Mexican: A.P. Torres (Tyler Silva) and Carlos Torres (Manuel Tapia). The lack of interest in them feels like a missed opportunity for deeper examination of this era from a non-white perspective. Surely being a dark-skinned orphan of Mexican descent was a different experience than that of the white teammates. We learn nothing about them outside from what’s in the end credits’ title cards. The most we get is Sheen saying one line in Spanish early on. There are ways to inject modern relevance to this coming-of-age period piece, starting with more fleshed out characters.

Football fans, or those longing for bygone days of old timey sayings and men with conventional character, may find enjoyment in the film's spelled out structure. Others will be at the mercy of its barrage of inspiration, devoid of insight. 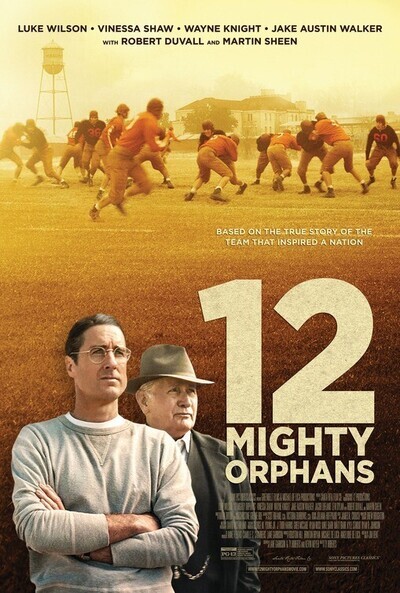