There are no truly sympathetic characters in "11 Minutes," a new thriller directed by Polish New Wave master Jerzy Skolimowski ("Deep End," "Essential Killing"). Don't even try to remember these people by name; this isn't that kind of movie. Just watch "11 Minutes" like you're channel-surfing, only you don't have the remote and the roar of static between stations is steadily growing louder as the channels switch back-and-forth, faster and faster. There's the hot dog vendor (Andrzej Chyra) who shamelessly flirts with any woman who passes his cart. And the young actress (Paulina Chapko) who submits to a sleazy audition with a small-time wannabe producer (Richard Dormer). And the actress's husband (Wojciech Mecwaldowski). And a drug runner (Dawid Ogrodnik). And a group of paramedics. And a new divorcee (Ifi Ude). And more. And more. And more.

You might not be impressed by "11 Minutes" if you reduce the film to its thematic hardline: we cannot glean capital-T Truth from surveillance technology—whether camera-phones or CCTVs—designed to unite our subjective realities' disparate fragments. You might also be disappointed if you read the film looking for a Big Idea from a master filmmaker. But "11 Minutes" should not be pigeonholed by its explosive climax, though everything in the film seems to depend on how you read the conclusion. Skolimowski masterfully disorients viewers with a series of seemingly unrelated vignettes that ultimately meet up, but not in the way you might expect based on everything-is-connected dramas like "Babel" and "Crash." "11 Minutes" is the work of an older filmmaker, but it's not an old man's film. He's angry and alienated by technology, but his film is playful in the same way that the best thrillers by Hitchcock students John Carpenter, Brian De Palma, and Dario Argento perversely mess with your expectations. You have to submit to the filmmakers' cantankerous whims, and be willing to be led around by the nose to get the most out of "11 Minutes."

Skolimowski ties these characters' stories so close together that you're never really sure who they are. And that's OK. "11 Minutes" is a modernist testament to the chaos created by the sheer ubiquity of digital cameras. Consider how much emphasis Skolimowski places on coincidence. Everything can be explained by chance, making the film's introductory sequence—most of the film's principal characters talk into digital cameras of various shapes and sizes—a barbed indictment of technology and the un-interrogative images that they frequently create. So Ude is stalked by her ex-husband, who has covertly placed a camera on her dog's collar. And Dormer's camera is strictly for show: it's an intimidation tactic, one whose footage, placement, and perspective are ultimately pointless. There is, in other words, a big question at play here: why should everybody have a camera if not everybody is an artist?

That may sound like a haughty question, but it's a fascinating one as it's expressed throughout "11 Minutes." Take this film's ticking clock plot—you don't know what will happen, but a metronome-like chime periodically reminds viewers that a distended 11 minute time-frame is leading us somewhere—at face value. Skolimowski jokes about the self-centered nature of people and artists, like the little old painter who watches an actor dive off a bridge, and then get fished out by a crew of divers. The painter remains unconcerned as the actor is retrieved. The painter doesn't know or care that a film is being shot near him, and that the man who just jumped off of a nearby bridge is just performing a dangerous stunt. The only thing the painter knows is that there is a splotch of ink on his canvas, and it's not where it should be. Is this the kind of myopia that laypeople, armed only with a camera and the desire to use it to document themselves, want to introduce into their quotidian lives? Or is there a short-sighted-ness inherent in all people, the kind that prevents us from seeing/empathizing/understanding all things at all times? It's a bit of both, really, and that's what makes "11 Minutes" such a deceptively simple thriller. Turn on, tune in, burn out. 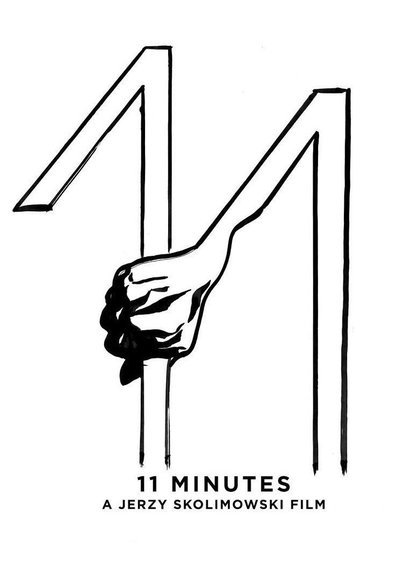 Ifi Ude as Girl with a Dog