Confusion and carnage: an interview with film critic Adam Nayman about the films of Ben Wheatley

Critic Adam Nayman knows how to start an argument. The Toronto-based writer, whose work has appeared in such journals as Cinema Scope, Slant and AV Club, made a stir in film critic circles a few years back with his book "It Doesn't Suck," which argued that Paul Verhoeven's widely reviled "Showgirls" was, in fact, rather interesting, and in some ways marvelous. His new book about writer/director Ben Wheatley, titled "Ben Wheatley: Confusion and Carnage," treats its titular subject, who is barely known outside of art houses, as an artist who's on the cusp of greatness. I talked with Nayman about his book, which is in stores now and can be ordered here. 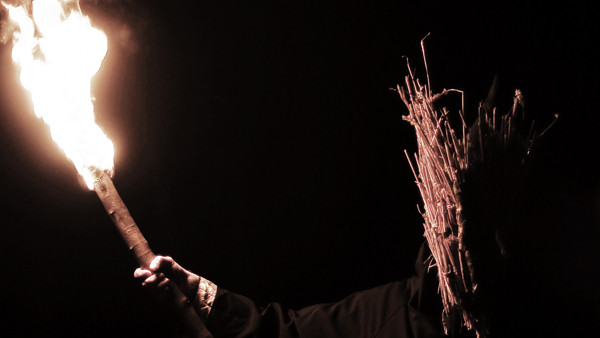 Why write a book about Ben Wheatley at this point in his career?

There's something very exciting about trying to write a book about a director before he or she has reached the finish line, and it seemed to me like Ben Wheatley was a filmmaker who could be interesting from two angles at once. On the one hand, he's done some very distinctive, substantial work in a very short period of time. On the other, he's possibly on the verge of moving on to bigger and more elaborate projects. So there's something open and provisional about taking stock less than a decade in.

He sort of reminds of Michael Winterbottom in the sense of urgency he brings to everything he does, and also his relentless experimentation with picture and sound—although for me, at least, he's more substantial than Winterbottom. I feel like every movie is a complete thought, whereas with Winterbottom I often felt it was a good idea for a movie, but the movie itself was not quite there, somehow.

It's interesting: I haven't heard that comparison before, but it's a good one, in that what critics liked about Winterbottom in the beginning was the sense of constantly trying new things—climbing inside different genres and finding footholds rather than places to hide.

I'd also agree that Winterbottom's restlessness led to a lot of work that felt undisciplined, whereas with Wheatley, the sense of mess—or, I guess, of confusion and carnage—is the result of careful design.

I'm very bullish on Wheatley as a formalist, and some of what I've tried to do in this book is write descriptively and accurately about how he uses framing and editing, rather than simply suggesting (as some critics do) that the films are jagged and frenetic.

You write a lot about how Wheatley uses the picture and the soundtrack to create a sense of anticipation, mystery, or menace. I wondered if you could talk about that a little bit here in relation to one or two specific movies? I was particularly intrigued by your describing him as "weaponizing the widescreen frame" in your analysis of "Kill List," which you called one of the great horror films of the new century—an interesting way to describe that film, since "horror" is not necessarily the first genre I'd reach for. Though admittedly I don't know what I would reach for!

When I saw "Kill List" at TIFF in 2011, I found myself very unnerved by how open the editing scheme was; I thought immediately of "Don't Look Now" and the way that Nicolas Roeg used fragmented cutting to suggest a world out of order. But of course the whole point of "Don't Look Now" is, that what's really happening is that everything is falling into place. "Kill List" is a film that seems to be dealing for a while in non sequiturs—the intrusion of that very moody musical score on naturalistic dialogue scenes, the utter perplexity of Fiona going into the bathroom and carving that symbol into the back of the mirror, and then of course everything is recuperated into the overall design.

As far as it being a "horror" movie, I can't think of a better way to describe something that's so elementally frightening, though a friend who watched it recently for the first time told me she saw it very simply as a "war movie"—which is one thing that Wheatley said about it as well. 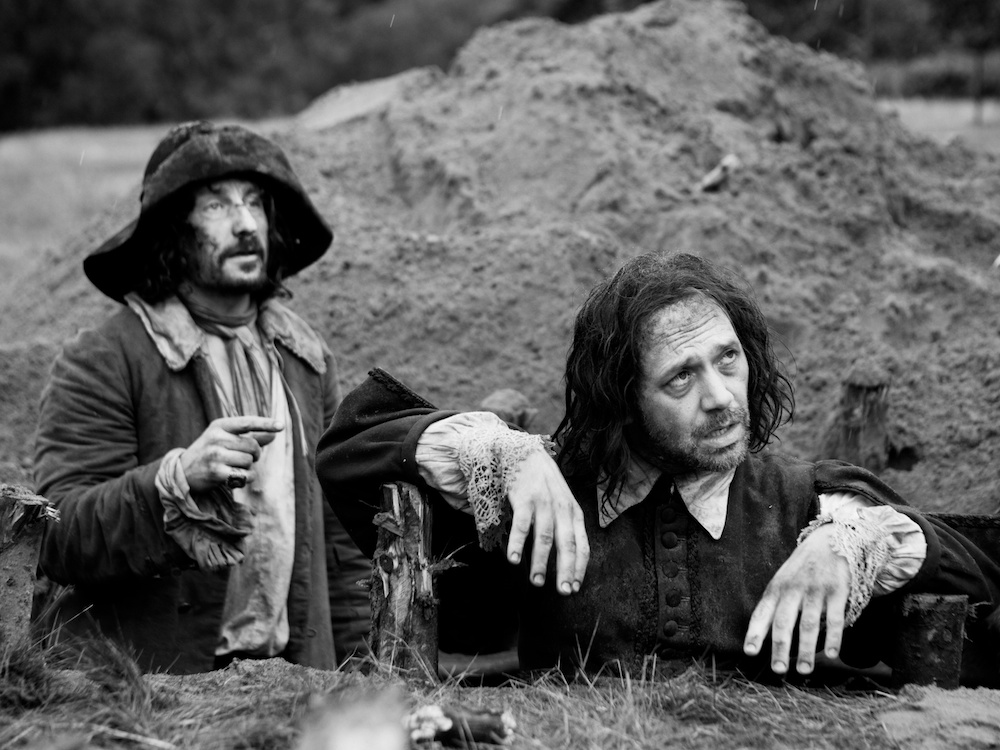 I don't always know if Ben Wheatley is kidding, and if so, to what degree, or about what. There's something very grave and even solemn about his films, but at the same time there's also an undercurrent of ... I don't know the right word. Prankishness? Almost a punk thing happening? Like in "A Field In England"—that was verging on "Monty Python and the Holy Grail" some of the time, but it also had a trippy, almost epic quality.

Yeah, absolutely. I think that some of the influences on that film are fairly high-end—like Peter Watkins' "Culloden," for instance—but it's always on the verge of absurdity, and a lot of the dialogue by Amy Jump is quite purposefully funny: all of their movies have a lot of space for nasty banter.

In some ways, I think "A Field in England" is the film of his that I admire the most because it's so uninterested in giving the viewer certain basic satisfactions while what it offers in the end is so audio-visually overpowering. Each time I've seen it, the sheer range of imagery is striking to me: the change from a severe, figures-and-landscape aesthetic—and even static tableaux—into something entirely montage-based.

I don't know how the shape-shifting aspects of that movie struck you, but I'd say this is one of Wheatley's greatest strengths as a filmmaker—he's always pushing, to the point of nearly imploding the movies from the inside-out. It doesn't surprise me that some people find it annoying; I find it exhilarating.

There's a touch of Alejandro Jodorowsky to some of the more hallucinatory images.

I'd agree, and I'd say that so many of Wheatley's reference points, cinematically speaking anyway, come out of that same 1970s period; what's so cool for me is that he draws from a lot of different traditions. So you can cite Jodorowsky, for sure, and Roeg—and also John Boorman and Ken Russell and Stanley Kubrick and Richard Lester and whoever else. There was an article by Raymond Durgnat called "The Great British Phantasmagoria" that was very helpful in shaping the chapter in my book on "High Rise"—a movie that isn't just drawing on the aesthetics of the 1970s, but dramatizing and allegorizing that period. In that way, the movie feels like a sort of ground zero for Wheatley and Amy Jump even if it's their fifth feature.

Would you say there is a point in Wheatley's directing career when he became Ben Wheatley? I mean, in the way that I always say Wes Anderson truly became Wes Anderson in "Rushmore," where you could apply critic Godfrey Cheshire's auteur test to the guy, which is: "Can you identify this director on a small TV on the other side of the room with the sound off?"

It's hard to say, because I think there are a lot of people who don't know him as a filmmaker at all—or maybe didn't before "High Rise," which got more traction in the United States than his previous films. I know that "Sightseers" being at Cannes meant that a lot of critics who'd missed the first two movies saw it and most of the reviews of that film—positive and negative, though I think it's his most "liked" movie across the board—suggested that there was a unique sensibility at work.

I think the "auteur test" is a complex thing in the cases of any filmmaker—including Wes Anderson—as it sort of depends on an individual viewer's frame of reference. I think the directors that you've written books on—Anderson and Oliver Stone—are more likely to be recognizable from the other side of the room ... I think that if one of Wheatley's movies was playing on a small television on the other side of the room, the guest might just ask "what the hell is that?"

What is his reputation in England? Do they see him as a major figure, a curiosity, a wait-and-see?

I think his reputation in England is a bit more of a going concern than it is in America, in the same way that David Cronenberg was something that Canadians had to sort out for themselves in the beginning. I know that the big British film publications—Sight and Sound, Empire, Little White Lies—have all written extensively, and not always positively, on the films.

A few months ago, Critical Quarterly did a whole symposium on his films, which I was able to integrate into my book at the last second—I was a bit annoyed that they got there first but it was also very reassuring to see that a group of academics had seen a lot of the same things in—and applied similarly high stakes to—the films as I had. In the "Down Terrace" chapter, I quote one newspaper headline after the film's release asking "is this the future of British cinema?" and I think it's pretty clear that nearly ten years later Wheatley has become somebody to reckon with in this new present tense.

Interestingly, though, I don't think Wheatley has broken through with American filmgoers beyond the niche audience that likes to go spelunking and see what new voices are out there. I wonder why this is? Is his sensibility not pop enough? Or is it a distribution or exhibition issue that has nothing to do with him? Or does he just need to direct a Hulk movie or something?

I'd say it has nothing to do with him. Films like "Down Terrace" and "Kill List" and "A Field in England" aren't actively courting an audience. That they were discovered and supported is very encouraging.

"Free Fire" seems like something that has the potential to break him in the States. It's being distributed by A24, it has Martin Scorsese's name on it, it got a warmer reception than "High-Rise" did—although I think the reviews for "High-Rise" will end up looking pretty short-sighted in time.

As for whether or not he needs to direct a Hulk movie, it's not for me to speculate on. I've read about some of the projects he's working on and they seem to be more personal and idiosyncratic—as well as things he's wanted to make for a while. At this point, he and Amy Jump have made six films in a row that I can't see anybody else having made. In time, I think that'll be the sort of thing that elevates his reputation.

What film or films would you recommend to viewers who have never seen a Ben Wheatley film but would like to get a sense of what he's like?

I think "Kill List" is the masterpiece, which is not to slight the movies that came afterwards. I watched it in New York on a 35 mm print at MOMI back in November when I did a sort of advance book launch and the intensity of everything felt overwhelming. Not just the sound and the editing, but the way he uses widescreen to capture faces and expressions, the depth of the black textures in the nighttime scenes, and the seriousness of the emotions he's dealing with.

I wouldn't dream of spoiling the movie except to say that what it's about—underneath all the stuff that it's easy enough to recognize as "genre movie" material—is genuinely tough, and provocative, and tragic, and really, really sad.

I think the movies that really haunt us say a lot about the kind of people we are, which is why it sort of worries me that I love "Kill List" as much as I do—I'm not sure how I feel about what that says about me. But it's also the truth.