Sardonic grim humor with a black heart is the tone of "Sightseers," not surprising when you consider that it was directed by Ben Wheatley, whose former films, "Down Terrace" (2009) and "Kill List" (2011), were black comedy thrillers involving crime, murder and the absence of a moral compass. "Sightseers" is part travelogue and part killing spree, and Tina and Chris rightfully take their place with other murderous couples on the run, from Annie and Barton in "Gun Crazy" (1950) to Kit and Holly in "Badlands" (1973) to Mickey and Mallory in "Natural Born Killers" (1994).

It's not immediately apparent that Chris is a killer. He just wants to show off his knowledge to Tina and have a nice holiday. The problem is, Chris can't let things go. Things like rudeness, boorish self-absorption, and being serenely happy grate on this resentful man. Tina, amazed by all the sex she is having, heady with freedom, tries to soothe him.

At their first stop, the Crich Tramway Village, they ride old-fashioned double-deckers. Unfortunately, a big goon drops his candy wrapper on the floor, and Chris forces a confrontation, making everyone uncomfortable. Later, Chris sees an opportunity and takes it, backing over the unrepentant litterbug with his caravan, crushing him to death. Tina and Chris soap the blood off the tires and dump the body. Chris feels that litterbugs like this chap ruin everything, and, even worse, this particular squashed litterbug has now ruined the Tram Museum for him. And that, that he cannot forgive.

Chris has a motive behind his madness, in other words, which cracks open the deeper themes of the film. What does it mean to be an English person? Chris is quite proper in his attitudes. One should not litter. One should not flaunt one's good fortune. Those who refuse to play by those rules, well, they are a blot on the face of humanity and who will miss them anyway? The wild Midlands area is the site of ancient kingdoms, resonating with the memory of medieval greatness. It was also the engine of the Industrial Revolution. Part of the British ethos is politeness, a sort of "No, no, you first" attitude, and Chris is at war with himself: He is sick of coming in second. During one of the more gruesome killings, the incantatory words of British visionary William Blake, who wrote a lot about the downtrodden, echo from the screen:

<i>And did those feet in ancient time

And was the holy Lamb of God

The British ideal is pastoral. Educated Victorian gentleman would take walking tours through the countryside, honing their observational skills of the natural world. Slobby Chris is the modern-day embodiment of that Victorian personality. But the connecting links are buried in the mists of time, leaving only incendiary class resentment. Chris bashes in the head of a snotty tourist in an isolated moor, and Tina whines, "I never thought about murdering an innocent person before." Chris replies, "He's not a person. He's a Daily Mail reader."

At one campsite, a group of "shamans from Portsmouth" drum incessantly in a nearby field. Tina imagines herself joining them, dancing with abandon. Murder becomes her way out. She has a taste for it. But Tina is sloppy in her murders. Chris fancies himself an intellectual, and the people he murders represent everything he hates about England and modern man. Tina, on the other hand, just pushes a woman enjoying her bachelorette party over a nearby bridge for no reason!

Alice Lowe and Steve Oram are both stand-up comedians from the Midlands area. They came up with these characters together, and "Sightseers" began as a series of sketches, which they then developed. They created a short, which got the attention of Edgar Wright, director of "Shaun of the Dead." Wright saw the feature-film potential in this dark material and brought it to director Ben Wheatley's attention. Lowe and Oram have been living with these characters for years, and it shows. The acting is very funny and well-observed. Tina is always trailing after Chris, with a kind of hesitant shuffling walk, saying his name repeatedly, "Chris ... Chris ... Chris ..."

The scenery the killers travel through is breathtaking, with the melancholy grandeur of English landscapes: fields and fog, lonely roads winding through green. The past is all around Tina and Chris, the greatness of England's history shimmers behind every action. They cannot access the power inherent in such a history, it is denied them. Chris begins to seem more and more trapped in the abyss between his ideals and his reality, and Tina starts to seem more and more released from the ties that bind. The ending, when it comes, is perfect. Of course it would end this way.

Director Wheatley has already shown his aptitude for sardonic horror-commentaries, and "Sightseers" is his best film to date. "Sightseers" is dark, gruesome, blithely amoral and thoroughly entertaining. 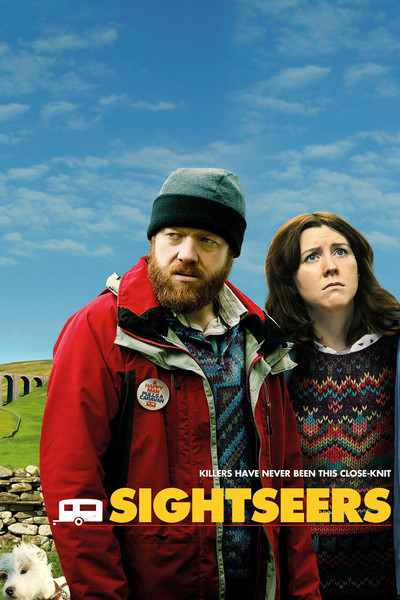