Spoiler alert: this is the opening sentence of the 1975 J.G. Ballard novel upon which this movie is based: “Later, as he sat on his balcony eating the dog, Dr. Robert Laing reflected on the unusual events that had taken place within this huge apartment building during the previous three months.” The sentence is quintessential Ballard: bone-dry, repellent and also deeply hooky, simple and precise while implying depths that the reader would be perhaps be well to fear exploring.

“High-Rise,” the new film directed by Ben Wheatley from a script by his regular collaborator (and wife) Amy Jump, begins with this scene, even with this sentence recited in voice-over. The visualization is crisp, definite, but discreet enough to not immediately provoke a scurrying to the exits. Wheatley is a smart, resourceful filmmaker who knows how to modulate his imagery. Hooking a movie viewer is different from hooking a reader. And “High-Rise” the movie did hook me. The story of a seemingly inexplicable breakdown of social order within an apartment building outside London that’s been designed to approximate a community, “High-Rise” was a speculative fiction very much of the time when it was written. Wheatley and Jump’s first smart decision in adapting the novel was in leaving it in its non-futuristic 1975 time frame. It’s the temporal place where Ballard’s narrative works best, and in the context of a 2015-produced film, it creates a certain retro frisson for the viewer: Apocalypse Then, so to speak. It also allows Wheatley and Jump to make some explicitly political points about Great Britain, which some may consider ill-advised.

Tom Hiddleston plays Laing, a smooth physician and teacher whose social anxieties don’t need much coaxing in order to surface, his placid and well kempt exterior notwithstanding. A few floors above him is the seductive, secretive Charlotte (Sienna Miller); almost twenty stories below him is Wilder (Luke Evans), a bluff, macho documentary producer. At the top of the building is the imperious, skeletal, epicene Royal (Jeremy Irons), who presides over a rooftop bestiary and does not quite preside over his haughty wife.

A precipitating incident—a pool party gone out of bounds, so to speak—sets off a general breakdown of propriety that’s also distinguished by a kind of class warfare. The movie sees Wilder abandoning his distressed and very pregnant wife Helen (Elisabeth Moss) to try and hopscotch to the higher floors.

Ballard’s original novel is better appreciated as a metaphor than as an allegory. His satire is of what he considered a basic human leaning toward atavism, a practical “nostalgie de la boue” (“nostalgia for the mud”). Wheatley and Jump interpret the book with a little more emphasis on what could be taken for its parable elements. They also jettison some of the more potentially uncomfortable sections of the narrative; dispensing with Laing’s sister removes the novel’s potential-incest theme. Which is not to say they’ve defanged the thing. In fact, between the richness of incident—semi-riots in the high-rise’s grocery market, Laing’s completely arbitrary humiliation at a top-floor party, the intrigues of Charlotte’s sexual life—and the ripeness of the imagery, in which the formerly pristine surfaces of the building become defaced by blood and other substances, the filmmakers really do manage to visualize a distinctly Ballardian nightmare-scape. This in itself makes “High-Rise” worth experiencing. The movie retains Ballard’s not-uncheerful mordancy, and brings home his conviction that what we convince ourselves to be the best of all doesn’t need much of a tilt to become the absolute worst. If you choose to attach this idea to a particular political figure—Jump and Wheatley allude to Margaret Thatcher in their film, but you may be reminded of someone else—so much the more relevant will this vision seem. With no solutions forthcoming, alas. 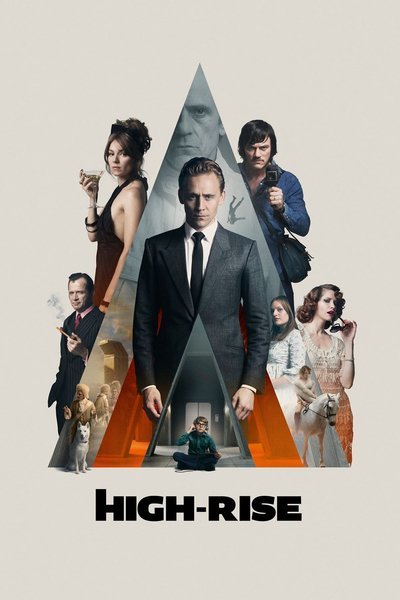